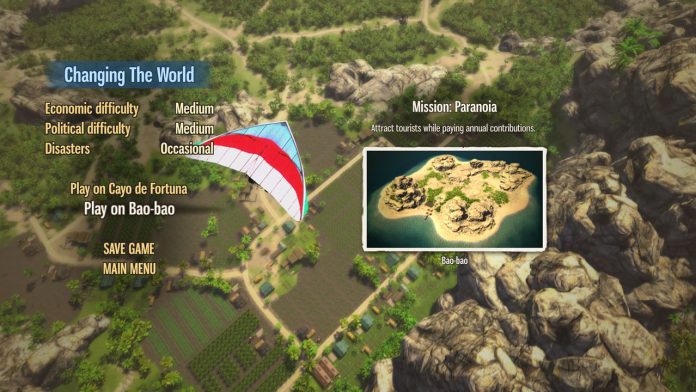 Stuck on a mission in Tropico 5? Want to know which Mission is next? GameplayInside presents an overview of all Tropico 5 campaign missions.

New to Tropico 5? If you need additional help during this mission please checkout the complete guide: Tropico 5 guide: How to survive the colonial era and declare independence.

It’s time to choose your first island. My choice is Cayo de Fortuna. Now that is out of the way Loard Oaksworth will inform you that you have been appointed as Governor. You are able to rule the island for 4 years, after that it is game over. Luckily you can complete tasks to extend your mandate. With this additional time you can eventually break free from the Crown. There are a LOT of quests during the first mission, probably to help new players get used to the game.

I recommend using 4 Guard Towers and 3 Military Forts. That way you can declare independence without much effort and minimize losses.

You restart on a new Island. No worries, next mission you will return to your first! The Crown will provide you with quests. After a while there will be “taxes”. Lower the taxes by completing more quests. Most demands are sensible. For example building a ranch is not problematic; it is a nice investment.

3  Mission: We will endure

Survive the invasion. If you did not build a decent army then make sure to quick build at least two Military Forts. You might want to increase their budget to maximum because in Tropico 5 this will ensure the job slots get filled.

3B Mission: When peace fails

Isla Rojo is planning to attack your island! You can try to defeat them or extend the timer with several quests. Here are a few to get you started:

4 Mission: Get Zweinstein – Amass an insane amount of money in your Swiss Bank Account

After completing some objectives Leon Kane will be killed. To make matters worse; You are the prime suspect. As punishment a large portion of your treasury will be confiscated at the end of each year. In order to find the perpetrator you must attract 256 tourists. The game assists you by providing you with several objectives. It might be smart to plan around them.

6 Mission: M.A.D. – Become a Nuclear Power before you run out of time

You will have 24 months research most of the Cold War tech tree and construct a Nuclear ?. You will receive some quests that are impossible to complete at first. For example you cannot export Uranium without researching more techs. No worries, at 12 months you will be able to postpone for 24 months at a cost of $5000 Swiss money. You can do this twice. Observatories do not work at sea level so construct two colleges and upgrade them so they generate 273 Research Points each.

Eco terrorists will continuously cause strikes.  At the end of the mission you will be asked to destroy your Uranium mines (why would be a spoiler).

8 Mission: Back To The Past – Research key technology before you run out of time.

To prevent the coming Apocalypse Abraham Zweinstein is working on a time machine. First you will have to chose between constructing a Vehicle factory, 4 Metro stations or a Fashion company. The next objective is to generate 100 research points in 20 years. You can speed this up with a few quests.