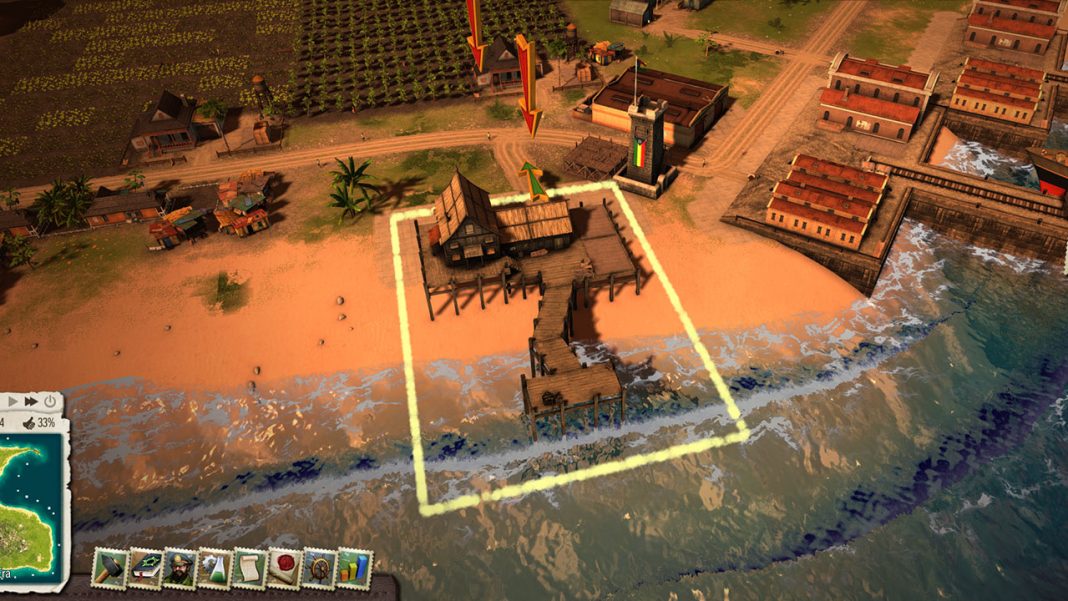 Tropico 5’s first expansion pack is here; Waterborne! The Waterborne DLC comes with a ton of new buildings and a campaign that spans 6 missions.

Are you stuck somewhere or are you interested in their objectives? GameplayInside presents an overview of all Waterborne DLC missions.

Waterborne  mission 1: Treasure Hunt – Explore the depths of the Caribbean Sea in search of a mystic treasure

At the start of the mission you will be presented with two missions:

Start with constructing a Logging camp. Completing objectives will trigger a royal commendation that allows you to choose between +5000 treasury, +5000 Swiss bank, +12 months mandate or +10 citizens. At this point 50% of the 98 Tropicans is unemployed and you still have 4years+ on your mandate so treasury makes the most sense.

Don’t forget to construct a Tavern, Catholic Missionary and Grocery to keep your population happy. Now start working on your economy. I recommend a second logging camp for some additional jobs. Also keep an eye on the number of stockpiled goods, you probably need a second teamster soon. Another plantation is also a good idea. Keep expanding your economy and build the 3 Oyster farms.

Continue to unlock the following quests:

The new building “Smuggler’s Docks” will provide a 10% bonus to everything that is imported. So if you start a trade route that imports 3000 coal the smugglers will bring in 300 coal.  Completing the quest will trigger a pirate invasion in 18 months. Just build a few guard towers and a military fort.

Once you have imported 9999 resources you have won the mission (even if you did not declare independence).

Optional quests to that give a Royal Commendation on completion:

Waterborne mission 2: How Deep Is The Ocean? – Attempt to sell black pearl and see what happens.

This mission will force you to move to a new island. So before you can even consider following the main story line you will have to build up your economy. Luckily you start with over $35.000 treasury. Remember that you because you are in the in the World War era you can issue Sovereign Debt (edict) to borrow $10.000. I recommend constructing the following:

Soon you will encounter the optional quest line that will ask you to construct a fishing trawler. It is recommended to do this since the mission will revolve around exporting fish. I also ended up constructing an Opera House and a police station early on. This will increase your popular support to 70%.

Once you are settled in it is time to research White flag so you can construct an embassy. You will get a nice cash reward. However be careful not to trigger the final objective too soon because it will start the Sea Race which basically implements a time limit.

Waterborne DLC: Mission 3 – Turn Up The  Heat – Find a way to slow how quickly the ocean drains.

In this mission our objective is to reach 500 degrees Penultimo in order to win the mission. You will lose if it reaches a negative value or if you fail to meet the time requirement. I choose to go back to the first island that was coming from the colonial era so I had a lot of work to do!

To speed things up I recommend to borrow 30.000 using the sovereign debt edict. Now activate Urban development (-50% construction cost of housing) and Industrialization (-50% cost of industries).

I used the money to construct a new city center with 6 apartment buildings, a grocery, church, cabaret, police station and circus. To boost the economy I constructed two steel mills, 2 additional docks and a teamster’s office. Start importing coal and iron and if necessary construct mines.

Now that the World War has ended the Europeans use less violence which has, according to Lord Aoksworth, lowered the heat and created a cold snap. The Big Freezes causes your progression to slowly decline. To stop this you will have to complete the following 3 quests:

I chose stop as I had no interest in a canned goods factory.

Waterborne DLC: Mission 4 – Terror From The Deep – Fight an invincible foe in an epic battle for the possession of the black pearl. 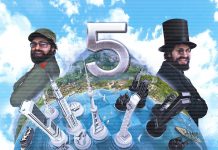 Tropico 5 guide: How to survive the colonial era and declare independence