We are now well on our way through the campaign. I started writing this as a guide in progress. Somewhere along the way I decided that I would not only write down objectives. After mission 12 I have also included a screenshot of my Islands’s layout that led to victory. I hope you will enjoy this second part.

9 Mission: The Pirate King – export large amounts of Gold at a low price

The game puts you back in the Colonial era on Isla Rojo or Puerto Coco. Isla Rojo contained 4 gold mines in the east on my map. You will encounter the following quests.

When I got the final objective it was 1914 and I had already proclaimed independence. So keep in mind that you can proclaim independence before you finish the mission. This might be smart so you do not run out of “mandate” time.

10 Mission: Through The Looking-Glass  – Export raw resources before you run out of time

You are attempting to change time. You will have 10 years to compete against Caya de Furtona and Boa-Bao.

The following map design resulted in 2.5 million in 30-60 minutes. 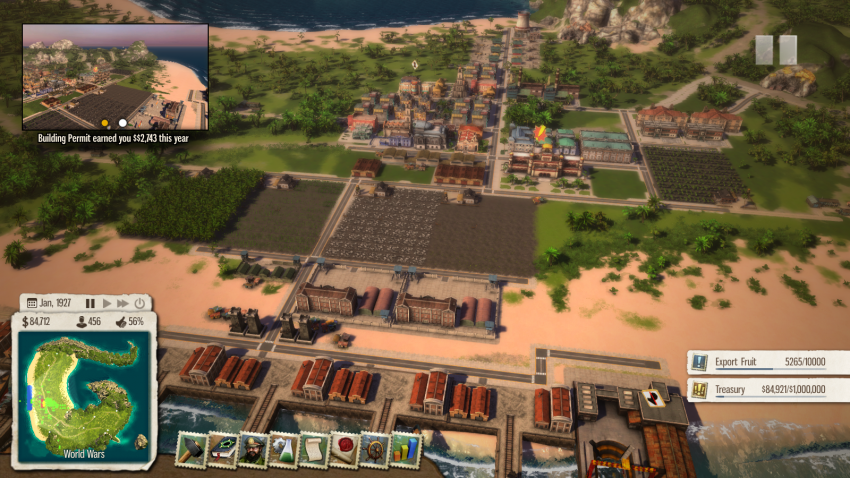 12 Mission: The Dogs Of War – Build the largest military in the Caribbean

Our goal here is to assemble an invasion force. For this purpose 50% of your military will join this force, meaning they will leave your island. Your goal is to gather 100 military units. There will be some missions that allow you to regain the population you lost:

There will also be random events

I recommend that you first start with modernizing your island. Construct a Rum Distillery and a Textile Mill. This will complete a quest giving you access to a free steel mill. When both factories are filled with workers construct a steel mill. Don’t forget to setup the appropriate mines and or trade routes. With the 3 industry buildings in place your income is enough to support 2 barracks and 2 army bases. This will eventually result in winning the map. Keep in mind that you have just entered a new era. So this means you should demolish your old service buildings and replace them. Build Churches, Police stations, Restaurants, Groceries, etc. 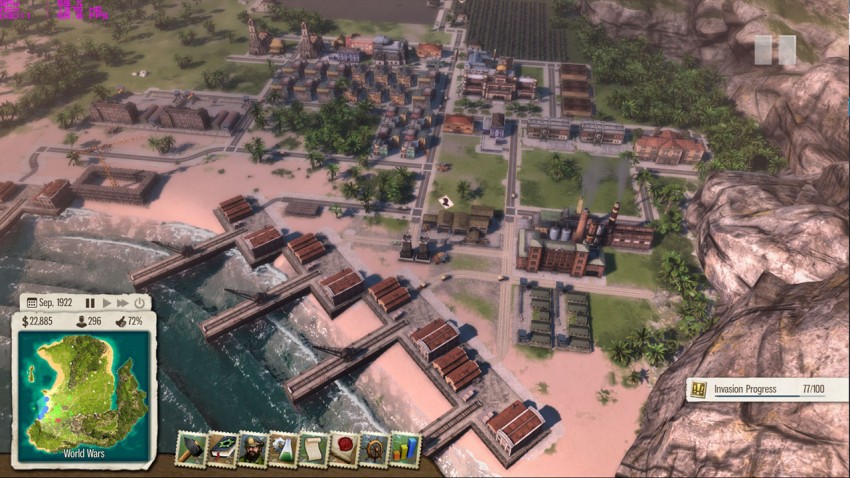 13 Mission: Leon Must Die – Attract enough tourists before you run out of time

According to Penultimo every one in a hundred tourists is a cold blooded killer. We can use these to take out Leon Kane. Therefore our objective is to have 400 tourists. This objective is cumulative so you do not need 400 tourists on your island simultaneously. During the game the following missions will boost your Tourism rating

Suggestions: Building a tourism industry is extremely expensive in Tropico 5. A family resort will set you back about $17.000. This will only house 7 tourist families and will generate a profit below $300. Meaning that each resort constructed will take at least 5 years to provide ANY profits to your treasury. Therefore I recommend making sure that you have a high income. Your balance should be+$40.000 or higher. You can accomplish this with a few well chosen factories such as the Steel Mill. Also try and research the Vehicle Manufacturing Plant, which has an income of $3300 monthly. Regarding the objective; I succeeded with 5 Family resorts (they only need 4 workers for 7 families) and 2 economy hotels. Other than that I constructed the 3 cabarets, 2 hang gliders, a circus and 2 beaches. 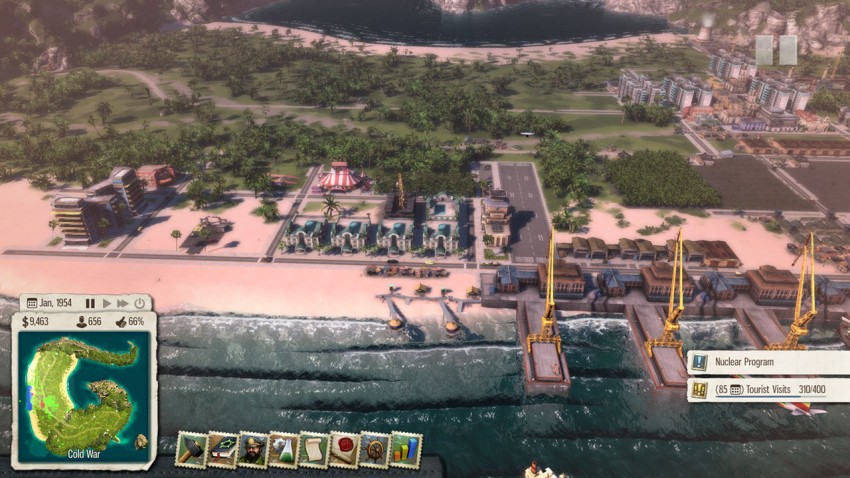 Our goal here is to flood the market with cheap oil. Win the mission by exporting loads of oil barrels at a reduced export price. Expect frequent rebel attacks.

Although it might make sense to go all out on oil related industries I would strongly advise against this. As you will notice the export price of oil will keep going down throughout the mission. Therefore it is best to have  strong alternate economy that can fund the oil industry.

I completed the mission in April 1955 with the following oil related buildings:

15 Mission: Hope – Unite the World while fighting off invasion after invasion

The final mission will be a combination of everything you have learned so far. Basically you will have to construct a metropolitan city of 900 Tropicans with a decent tourism base and sufficient army.

This mission requires you to construct a LOT of buildings. Let’s check it out… 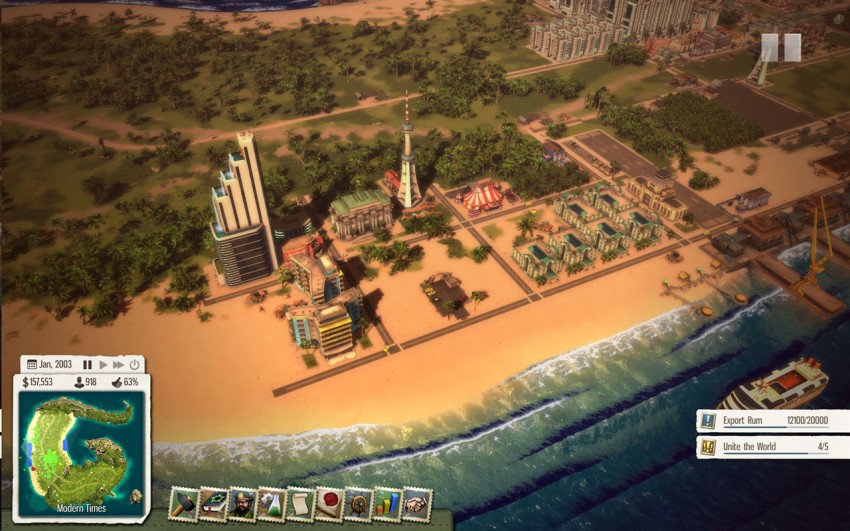 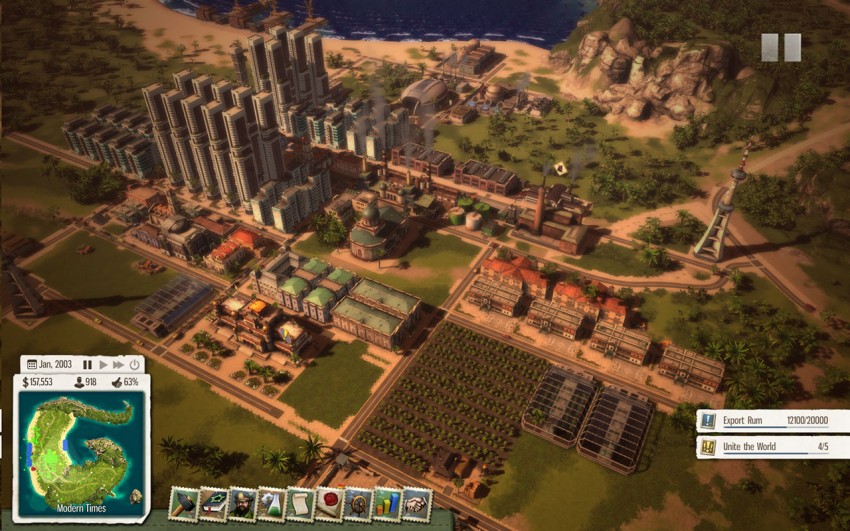 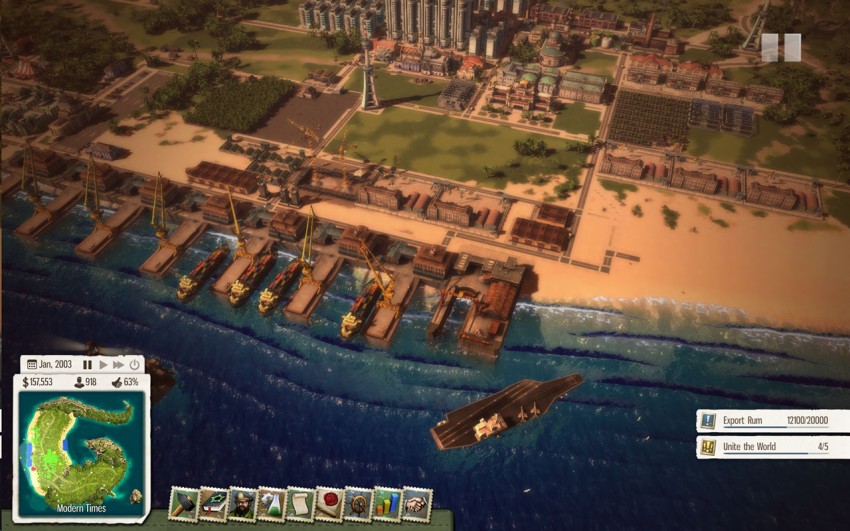 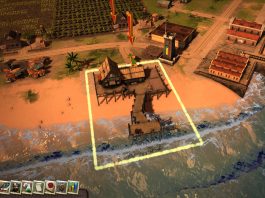 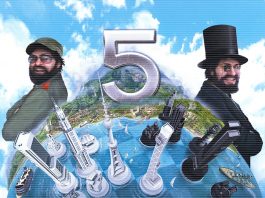 Tropico 5 guide: How to survive the colonial era and declare...