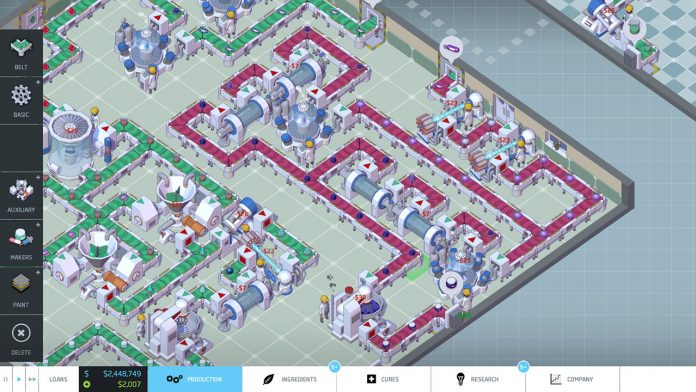 Big Pharma is a complex puzzle game and business simulator where you have to create an assembly line that converts raw ingredients into pharmaceutical cures. You will be making a lot of choices and memorizing upgrade paths. You decide which cures to produce, how to setup your factory floor, how to deal with side effects, etc.

Big Pharma’s main component is creating assembly lines. Ingredients need to be moved through a series of machines before the finished product can be sold. Optimizing this process can be challenging. Different machines have different shapes and input/output connections that need to be connected by transport belts. Hereby creating a puzzle to maximize space. Some machines take an additional step and will slow your production unless you adjust your layout to take this into account.

However there is a catch. By lowering the concentration we also activated the increase in blood pressure (8-16). So there will be some customers with side effects. There are several strategies to deal with side effects but they will all reduce your profits. I will talk more about those in future chapters.

The game will become more complex than simply sending an ingredient through one machine and selling it. That is where upgrading comes into play. Once an effect is active it can be upgraded to cure something else entirely.

If you thought that was complex then you might not want to hear this: the game does not end at tier blue ingredients. There is also a purple tier that requires you to upgrade an active blue effect. To upgrade to a purple effect you will need to add a catalyst through a mixer. So the chain not only becomes longer, it also becomes more complex. Additionally the catalyst will also have some side effects that you have to deal with.

To summarize the puzzle aspect of the game is a combination of figuring out the right concentration that creates the most potent cure with the least side effects whilst using as little space as possible.

Besides puzzling with layouts and concentrations Big Pharma also has a decent business simulation. All the basics are there. You start with a tiny factory and a limited budget. You can take out a loan but that will make you pay interest. Each machine will have an operating cost meaning additional steps reduce your profit. As soon as something goes through a machine these operating costs will be deducted from your balance. So there is always a tradeoff between making your product better and keeping costs down. The best product does not have to be the most profitable product.

This effect is further strengthened by the in-game economics. When your drug launches it will be rated C. The game will determine the value of your product based on demand, potency and side effects. However, once there have been a few customers the game will know how many people you cured and how many encountered side effects. This can either increase your rating (e.g. A gives a+20% value) or decrease your rating (D- gives -10%).

The game features 11 disease categories that all have 1-3 cures that have a demand that changes over time based on random events, player action and competitors.

I mentioned demand because there is an actual market that fluctuates. For example 857 patients could be needing anti-seizure medicine.  At 82% net demand there is already a lower then average price. If you produce even more the saturation will decrease the price further. There is also competition that produces their own cures, often in direct competition with your products.

The game doesn’t end there. You can also hire some staff. Explorers can be send to foreign regions to discover new ingredients. These new ingredients often unlock new cures or provide alternatives with less side effects. Alternatively you can keep them unassigned and they will generate Ingredient Upgrade Points that can be spend to make ingredients cheaper.

You can also hire scientists that can be send to active research to unlock new machinery. Alternatively they can be idle and generate Research points. Research points can be spend to reduce operating costs of machinery and expansion.

The game is isometric meaning it is two dimensional, but it looks good. At least as far as business simulation games go. Obviously this is no Star Wars Battlefront Directx 12 game. The engine is solid and scales to pretty much any resolution (including 21:9 Ultrawide). It will run on pretty much any machine, even when zoomed out. Information is displayed in different panels or tabs.  A thing that annoyed me were the animations when changing between these tabs. After the 100th time you no longer wish to wait 0.5 seconds for that menu to slide in.

Sound effects are functional and the music is repetitive. Although I doubt you will notice this when you are working on your next complex design.

Besides the tutorial the game features 7 scenario groups that each group 6 missions of similar difficulty and challenges. In total there are 48 missions to be played. It took me 10 hours to complete the first 9 so there is plenty to do! Additionally the game comes with a free build mode where you can play the game unhindered by restrictions and goals set in some of the scenarios.

Big Pharma is easy to get into but ramps up complexity rather quickly. If you have a good memory and you like puzzling then Big Pharma is a fun game to play. However, if you have a hard time remembering 3 or more components than you may find this game incredibly frustrating. I can recommend this game to anyone that enjoys puzzles. For business sim fanatics it will depend on your willingness to micromanage designs.