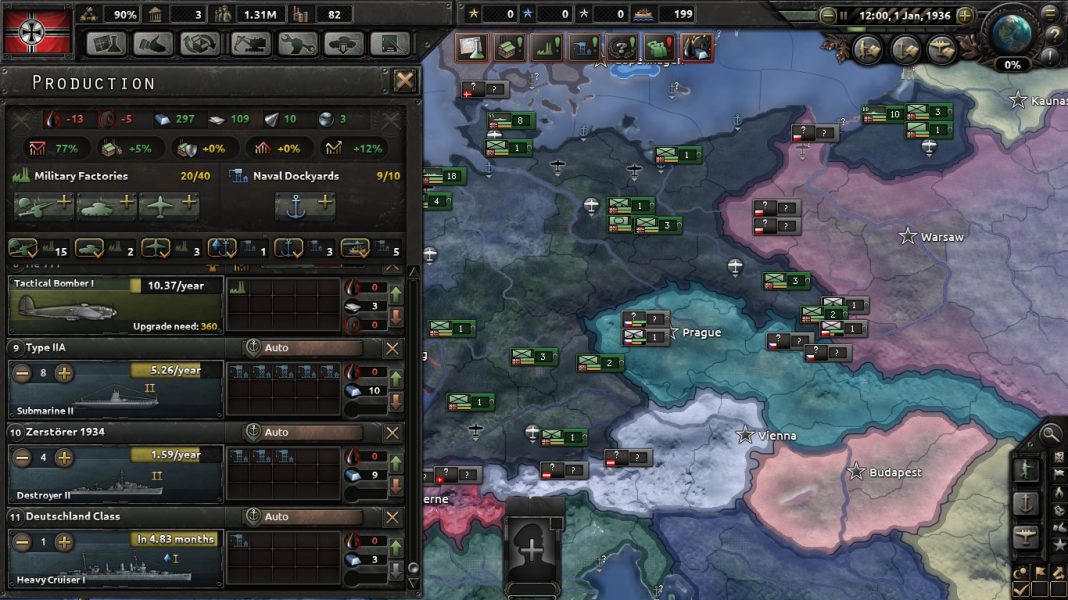 Hearts of Iron IV is the latest Second World War simulation game from the famous grand strategy development studio Paradox Interactive. It is the fourth numbered and sixth official entry in the series, which includes two mods for the second entry, published by Paradox.

In the game, you guide the country of your choosing through World War II and into the postwar world. The two scenarios so far released begin in 1936 and 1939 and include as playable every country which existed in those years.

Before beginning to face the trials and tribulations of war, you make options which will determine the experience in this particular campaign. These influence starting date, difficulty, and how historically focused the AI’s behavior will be.

The first choice made is the scenario, of which there are two at this time. Gathering Storm has you in 1936, and the world will never look the same. The only war in progress is the Italian invasion of Ethiopia, Germany has yet to make the annexations and political overtures which lead to war with Poland, France, and Britain, and the Empire of Japan is not engaged in open hostilities with China. 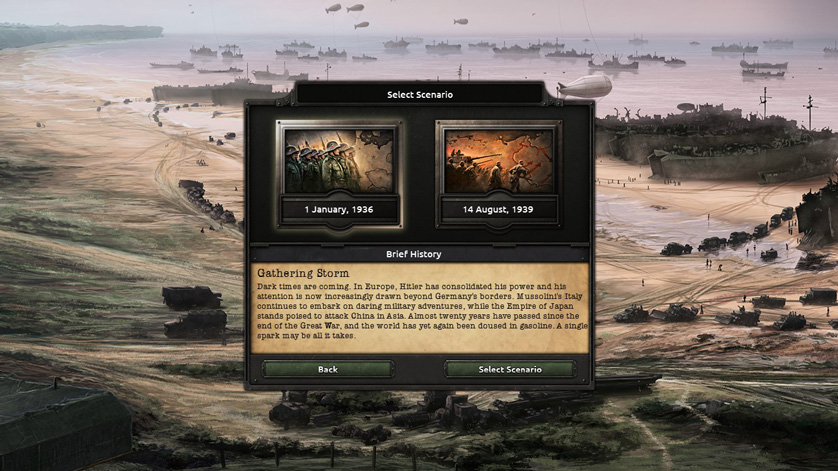 The second scenario, Blitzkrieg, takes place after the Italian annexation of Ethiopia, German expansion in central Europe, Japanese invasion of China, and the Spanish Civil War. The World War has not yet begun, but is well on its way.

After you choose which date in which you would like to begin, you are offered a range of major powers with which the game recommends you play. The blank portrait at the end of the line will take you to a world map which offers further options in both gameplay and nation selection. 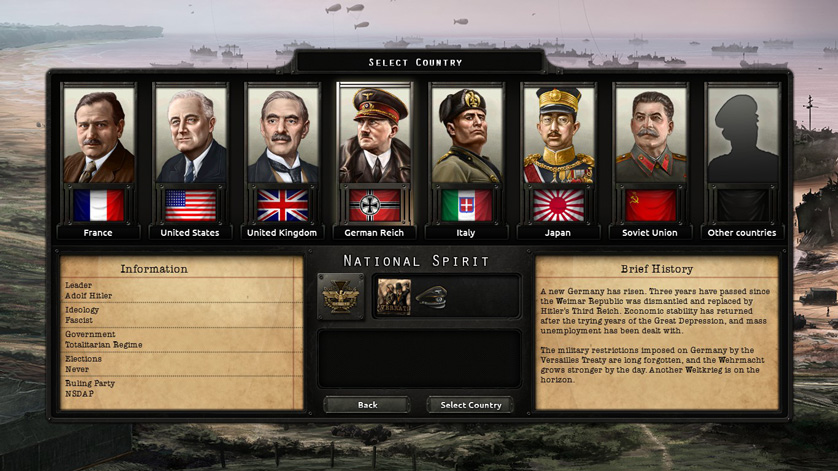 In addition to AI modifiers, the difficulty may subsidize or penalize the player country. Of the three difficulties available, the easy and hard will modify your production efficiency ceiling, research time, and political power gain while the normal setting has no visible modifiers.

Additionally, an option to play in Ironman Mode is present as in other popular Paradox titles. Checking this option will permit the earning of Achievements, but forbid the player from saving the game manually. If you choose to play Ironman, you can adjust the interval at which the game will autosave in the game options.

To guide the narrative of the events which led to and occurred because of World War II, in gameplay nations have trees of National Focuses which allow them to guide or influence their development. The major countries and Poland, which have special National Focus trees, are scripted to follow these trees in a historical order. If you uncheck this box, they will follow them according to their perceived needs and maybe make things a little different! 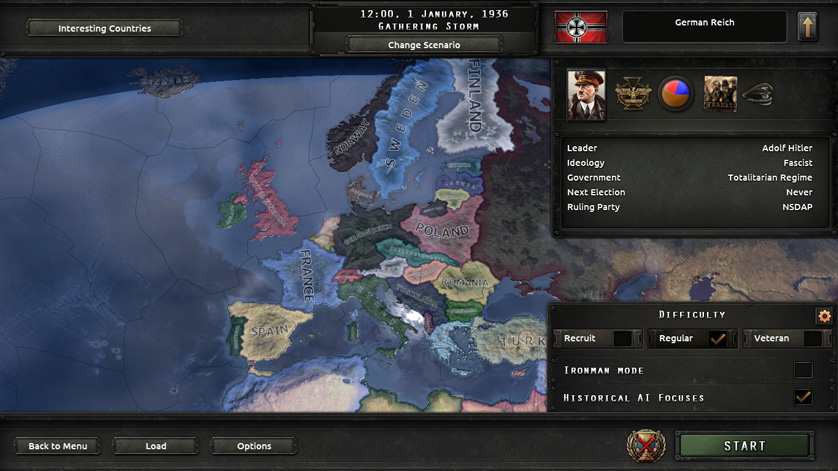 The game will start paused, which gives us the opportunity to make several decisions about the way we’ll be running the German Reich. Note the icons at the center of the top of the screen, several of which have an “!”. These are decisions which are time sensitive and require your attention. As the AI can make these decisions immediately, it is important to respond quickly in order to stay competitive. The appropriate hotkey is the spacebar, and we’re fine as long as we respond on that day. We will be looking at these in order. 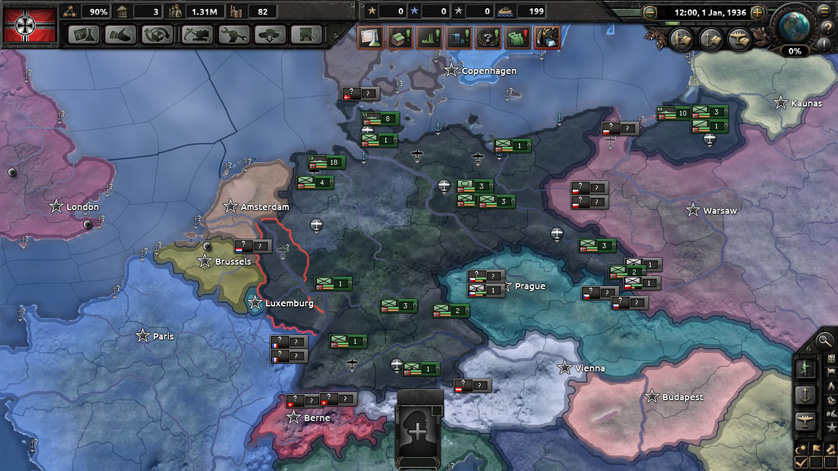 Now while the tutorial does a decent job of showing you how to interface with the research screen and the tech trees, there are things it is important to understand before making decisions here. There are two trees we’ll be thinking about here, equipment and doctrinal trees. There is one of each for Naval and Air Force, and several equipment trees for the Army. Equipment is not as important as doctrine, and you will find it impossible to research, let alone produce, all types of equipment. You have some flexibility as to making the right decisions, so you can safely make educated guesses based on how much your industry can provide and what you’ll need against what country on what kind of terrain.

Read carefully the descriptions of how doctrine research influences unit performance. Various naval doctrines, as an example, favor a few specific units in different ways. The Indirect Approach tree modifies the organization of Cruisers early, making them more effective in combat, while the Base Strike tree does the same for Carriers. Indirect Approach makes the best of what your navy has, while Base Strike requires the industrial effort to have a Carrier force and keep it supplied with Carrier-capable aircraft.

As far as army equipment is concerned, pay attention to the geography of your country and your mission. The French have ample rivers between themselves and Germany, so as Germany it is important to tech Engineers and attach them to the divisions you plan on being more aggressive with. 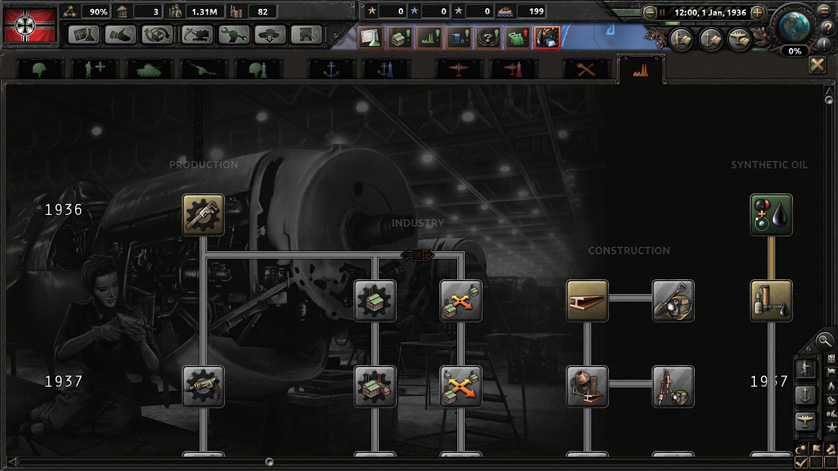 But for the first techs selected, the last two trees are best. Engineering and Industry respectively, they help research and production speed. These will benefit us most in the long run, so it’s best to get them early!

The Production tab could have an article all of its own written on it. It itself is split between Military production and Naval production lines that use Military Factories and Naval Dockyards respectively. Military Factories produce everything from boots and rifles to tanks, trucks, fights, and bombers. The number of factories, or dockyards, that you assign to a project determines how much of that equipment will be produced in a day, or in the case of ships, in a year. 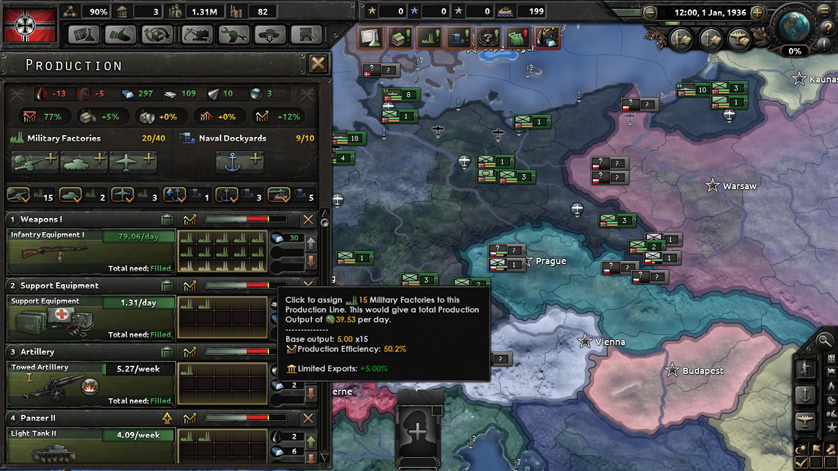 Production requires resources. In Hearts of Iron IV it will not matter how much oil you have when you order the Luftwaffe over the English Channel or your armored divisions into Russia. The Trade & Resources tab remains crucial, however, because it has a huge impact on industrial activity. Not having the rubber or oil to produce aircraft means that their production will suffer a huge penalty and, interestingly, that their production efficiency gain is essentially zero. This means that if you add factories to that production line, daily production will increase… but not by much over a long period of time. So, if you need to produce equipment requiring resources that in peacetime were provided by a trade deal with a country you are currently at war with, try to avoid removing factories from that equipment or to find an alternative. Note that each trade deal with a foreign country requires one Civilian factory and will provide 8 units of that resource. 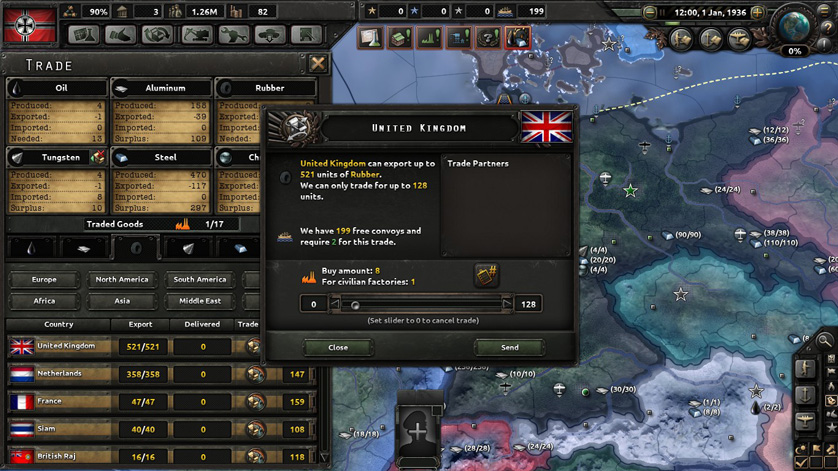 The Training and Deployment tab is where divisions, corps, and armies are, well, trained and deployed. It requires Army Experience to change the structure of your divisions by adding or subtracting support elements and battalions, which is acquired principally in combat. Note that there is no similar menu for creating or deploying air wings or fleets, which is done automatically when you assign planes to an air base or ships to a fleet.

When you open the menu, a sidebar will appear listing the division templates used by your country’s army. In 1936 this usually includes infantry, cavalry, and early armored and motorized formations. When you order a division into training, you can add divisions to train in parallel. Each battalion that makes up a division requires a certain amount of equipment, but while a division must be fully equipped to deploy it will train regardless of how much equipment you have available and deploy immediately when the required equipment is produced. 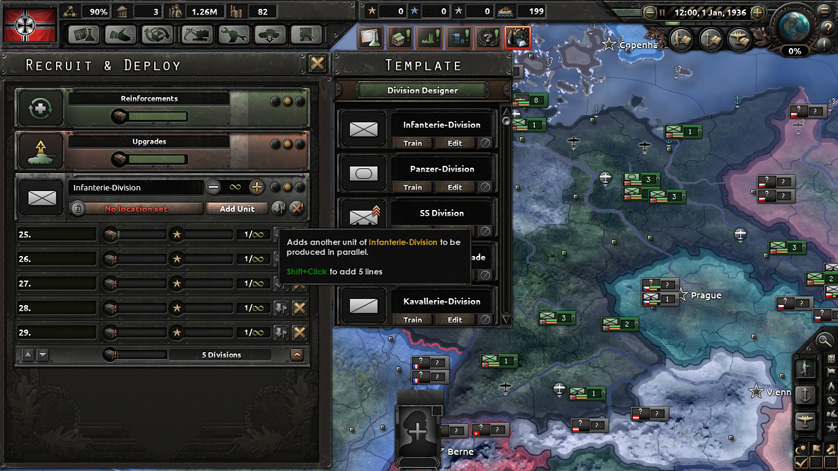 It is possible to deploy a division before training is complete with significant combat penalties. They will still require the full amount of equipment, but you can lower the required amount by removing battalions from the template of the desired division.

New also to Hearts of Iron IV are event-driving “National Focuses”. Each Focus requires 70 days to completion and can either confer benefits or can drive world events. The Anschluss of Austria, annexation of the Sudetenland, and other events leading up to World War II are driven by the National Focus trees possessed by the Majors. It will always be up to you how you wish to pursue these Focuses. Popular strategies are to rush Focuses that add industrial capacity and, especially, research slots. 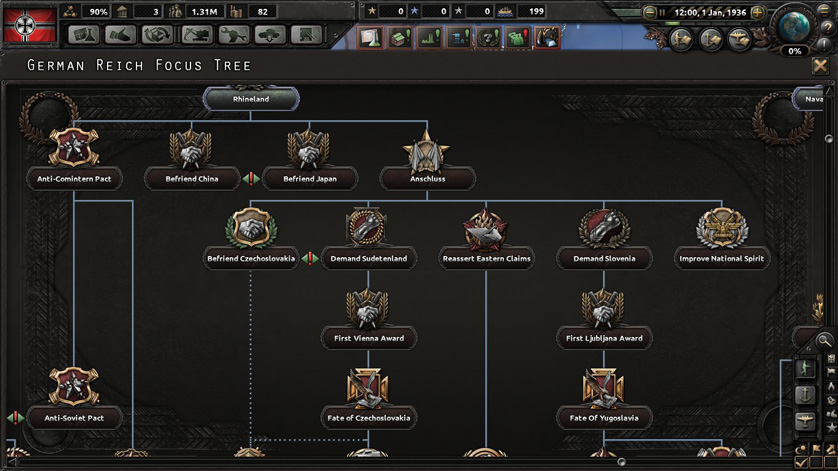 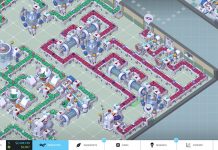