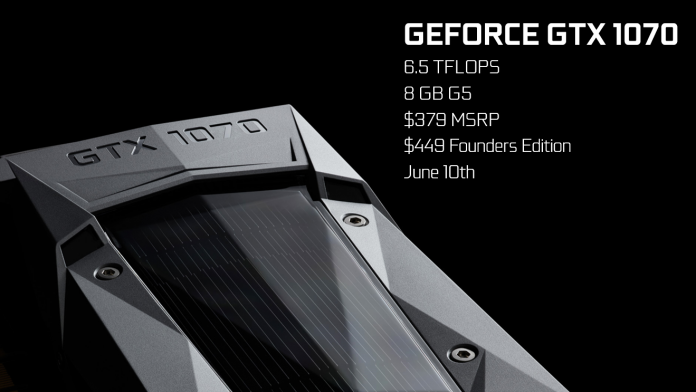 The latest Geforce GTX 1080 launched two days ago, on May 27th. According to Nvidia, the GTX 1070 will be available from June 10th. However they did not mention much about performance.

The thing we are all eager for are the performance benchmarks, so how good is it?

There were more benchmarks, but to take into account fair-use I will refer you to clubic.com for the other 7. Based on their results it is clear that the GTX 1070 is much faster than the original GTX 970. It is even faster than a Titan X and a GTX 980 Ti.

But what about overclocking potential? Is there any and if so is it any good?

To be honest overclocking the GTX 1070 does not look to be very good. Clubsonic used a stock Founders Edition so let’s see how they did. They were able to increase the core clock by 225 Mhz, which is nice. However the memory was only able to gain 50 Mhz. Apparently the GDDR5 is already pushed to it’s limit on stock. Remember the GTX 1080 is using the much faster GDDR5X. Even with custom coolers I do not expect much will change there, the GTX 1070 is limited by memory bandwidth and you cannot go around this by overclocking.

This hunch is confirmed if we look at actual gains then the overclock only added about 12% in “real world” performance. Unfortunately they tested at 4K, which is not that useful because no one will be playing at 36 fps. So it will be interesting to see other reviews.

If we can trust this source then power consumption is looking very good. The idle power draw hasn’t improved much with 61W. However the maximum power draw is 224W, which is below a GTX 960! The original GTX 970 did 315W so that is a tremendous leap forward.

Again we did not test the GTX 1070 ourselves and we just summarized the findings of the first benchmarks we could find online. Later this article will be updated to reflect all reviews out there. The original French article can be found here:

What we do not know is the pricing. Sources from MSI noted that it might be a bit higher than Nvidia has led us to believe, but we will have to wait and see. In total there were 10 benchmarks and every single one of them looks very promising. The upcoming GTX 1070 is much faster than the original GTX 970. It’s slower than the GTX 1080 but if the price is right it will have a vastly superior price/performance ratio. The power consumption is also extremely good. You could actually argue that by upgrading to the GTX 1070 you can earn back some of your investment by lowering your utilities bill.

That leaves the overclocking potential that looks to be a big letdown.  The GTX 1070 is probably limited by memory bandwidth. Because the stock GDDR5 is already running at 2000 Mhz (8000 Mhz effectively) there is not much room to improve here. We have reached the limit of what GDDR5 can do and we really need GDDR5X and HBM(2) to get better. However given that the stock performance is already so good the GTX 1070 is definitely worth the wait!