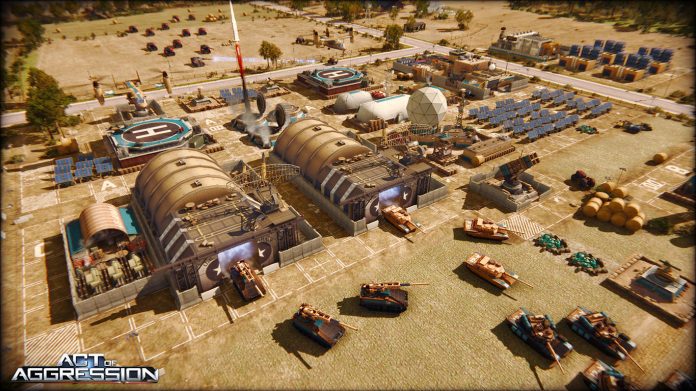 Act of Aggression is a brand new RTS (Real Time Strategy) that tries to take us back to the golden age of real time strategy. It combines the familiarity from classics like Command and Conquer Generals with state of the art graphics and gameplay enhancements.  It was developed by Eugen Systems, developers that previously released Wargame, R.U.S.E and Act of War. So there is plenty of experience with RTS titles. Act of Aggression features 3 vastly different factions that battle for domination on large symmetrical maps by harvesting resources, building bases, creating defenses and constructing all kinds of units to outsmart their opponents.

ps: I am planning a video version of this review.

At the start of the RTS genre we were harvesting Tiberium with harvester vehicles that had to bring their load to their refineries in order to generate money. Over time this mechanic evolved to fixed strategic depots that often could be exploited by either constructing a building directly on top of them or simply capturing them. This reduced the need to micromanage and defend your expensive harvesters but also removed a viable strategy of killing said harvester.

Act of Aggression has come up with an ingenious combination of both the old and new way. Across the map you will find dots that represent resources. A refinery will have to be constructed near these deposits. Once constructed these refineries will start to fill up with resources. Resources that have to be transported to your base before you can use them.  There is a lot of freedom involved here. The player can determine where to place the refinery, including orientation, and can even opt to cover the same oil field with multiple refineries. Additionally the player can order extra carrier units and determine where they take and drop of their resources. So if you refinery is empty you are free to re-assign these carrier units to other refineries.

Interestingly the resources are procedural generated each game. Meaning that every time you play a game the resources will spawn somewhere else. Forcing you to use recon units and keep you on your toes.

Act of Aggression features no less than three different resources. The most basic resource is money (yellow) which can be earned by refining oil. You will receive money once the carrier unit has dropped of its oil at your base. That makes harassing the economy a very viable strategy. However because we are talking about oil, the explosions are quite big and can damage your attacking units. Luckily there are some factions that can upgrade their carriers with weaponry and additional armor.

Aluminum (blue) is the second basic resource. Unlike oil this resource has to be stored somewhere in your base. The required aluminum will be instantly deducted when you construct units, buildings or research upgrades. Interestingly, your carriers and refineries will stop working when your storage is full. So you better make sure that you build plenty of storage. Don’t forget to defend it properly, you wouldn’t want your enemy to destroy your pile of aluminum!

The endgame revolves around a mysterious red resource named rare earth elements. This red resource will allow you to construct the most powerful units, research the best upgrades and construct super weapons. Like aluminum it has to be stored in your base. However, rare earth elements are only available in the end game because you will need expensive upgrades and/or research to be able to extract it.

But what about the single player campaign? I am sure you guys are eager to know about that! My press preview featured two campaigns: The Chimera campaign and the Cartel campaign. The campaigns are classic RTS. Meaning that the story is partially told by a fictional news broadcast that gets interrupted for “breaking news”. It doesn’t get more cliche then that, does it?

The game will try to hold your hand. At first you will only have access to a few infantry units. However completing bonus objectives such as losing NO units will keep things challenging. In fact I restarted the first mission at least 4 times. Personally I would have preferred a lower difficulty with more strategic options.

As the story progresses the player will unlock more units and buildings. The story itself is told reasonably well. Unfortunately there is no acting: it is a mix of photos, game footage and animations combined with a voice over. The Chimera fight a war on separatists that created their own state. They are deployed all over the world. The third mission features a story where important political figures are under attack in the International Tribute in Den Hague (The Netherlands). The Cartel campaign plays as a prequel and goes back in time for 1.5 years and tries to put the same bad guy into power.

So far the Chimera campaign has 10 missions. The Cartel campaign, which unlocks after the third Chimera missions, has 5. I am sure the final game will ship with some additional missions. The interface will invite you to replay missions that are not 100% because you missed some bonus objective. Overall there seems plenty of gameplay to keep you busy.

Continue to the next page to read about the Gameplay, Multiplayer, Factions and the Engine!