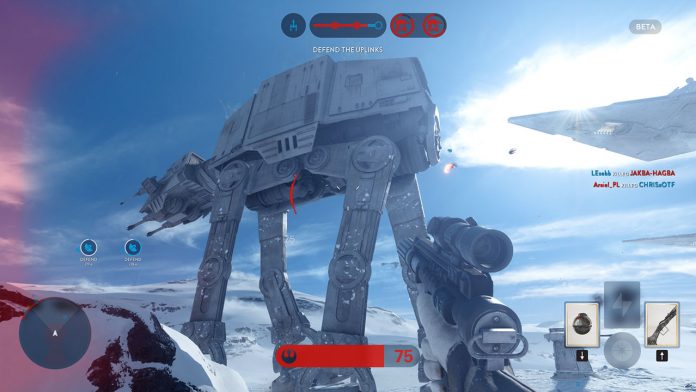 If you’re a Battlefront and Star Wars fan, then a game title like Star Wars Battlefront 2015 might just be enough to have you reaching deep into your pockets and throwing your money at EA.

However, you may want to slow down and have a look at what content (or lack of) it has on offer.

As I’m sure you’re already aware the open beta for Star Wars Battlefront was held over 6 days starting on the 8th Oct. This was the first glimpse most of us mere mortals got to have some hands on time. During my play time I found the servers to be stable with only a tiny bit of lag at times. Comparing this to other Beta stress tests I’ve been involved with, this was one of the best.

Due to the game shipping in a month my expectations for the game were high. DICE doesn’t have much time to implement any changes resulting from the Beta so I was expecting a rather polished game. Battlefront didn’t disappoint. The game options that were available feel finished. There were all your typical PC graphic and sound options, FOV, texture quality and also color blind settings. Hopefully these options will transfer over to consoles too. If the game had shipped in its current state, 99% of consumers would have been happy the game was ready.

The Beta consisted of a couple of multiplayer modes (more on those later) and a single player or 2 person co-op mode. The co-op mode is called Survival and guess what, yep, you have to survive wave after wave of Imperials that arrive in drop ships. The game play is solid enough but its not particularly ground breaking in its execution. I can imagine that even the most devoted top score hunter wont find much enjoyment in Survival mode much past a couple of hours. It seems like DICE decided to flesh out the game with an easy to produce mode so they could advertise the inclusion of co-op play. I feel like joint co-op missions with objectives and required teamwork would have been extremely entertaining and there is scope in the subject matter to enable this. It just seems like this mode was not on Dice’s priority list, and it shows.

Multiplayer gameplay is where Star Wars Battlefront really starts to flex its Jedi muscles. Dice have a good record at producing deep multiplayer action where strategy and teamwork pay off. Star Wars Battlefront is no exception. In conjunction with the normal Battlefront tactics there are random pick ups dotted throughout the map. Think Unreal Tournament weapon pick up. These can turn the tide of battle if deployed correctly. From implosion grenades to deployable sentry guns, knowledge of where the pick up points are and where to deploy them is crucial to success. Contained in these pick ups is the ability to play as either Luke Skywalker or Darth Vader. When activated, you re-spawn (no death count) as your allotted hero and can feel safe in the knowledge that every Imperial or Rebel scumbag is going to want his piece of the enemy leader. This is by far the most fun part of the game but its not something that really impacts the battles outcomes.

There were on two modes open for the multiplayer Beta. Deathmatch and Walker Assault. Deathmatch is exactly what you think it is, a very simple recipe of spawn, shoot, die and repeat. Nothing here will keep you coming back. There are pods you must protect in order to loot their rewards but the whole experience is very two dimensional. However, Walker Assault is a different experience altogether. The Rebels are tasked with stopping two Imperial walkers from pushing the front lines back and destroying their base structure. In order to achieve this the Rebels have to try and keep “Uplinks” active so they can call in air support and force the walker shields to lower. This enables the Rebels to focus their fire power on the walkers and end the assault. The constant movement of the front line makes every inch gained or lost feel very important. There is nothing worse than seeing a group of well organised Stormtroopers running towards the objective and knowing you are not at liberty to run. Standing your ground is the only option. There is just a single map available in the Beta for this mode. Hoth, is a snowy wasteland every Star Wars fan will be familiar with. The only problem with this mode was that the Imperials ALWAYS win. Out of the countless games I played, I never once won as the Rebels. This showed when on the team lobby as the Rebels always seemed to lose half its player base at the start of every game. No-one wants to lose. This balance issue will have to be solved either before launch or very soon after.

Some issues with Star Wars Battlefront

So far my time spent with the Star Wars Battlefront Beta has been enjoyable but there are a few areas where the game really lets itself down.

Firstly, no classes. All Dice’s big hit FPS’s have used classes to add depth and tactics to its games. Everyone remembers the first time they dropped a med pack at the Metro station in BF3 and saw a chain of XP being collected by doing nothing. These moments simply don’t exist in Star Wars Battlefront. You can pick a different load out to the rest of your team but that is limited to a few different grenades or a jet pack. There is nothing here that makes you feel like you have a unique role to perform.

Secondly, weapons. There is only a small selection of five to chose from and they all feel the same to use. Non have to be reloaded. The only reason to stop firing is to let the weapons cool. All weapons have no recoil, instead they rely on a random spread of rounds. This can be infuriating when you have your enemy in the center of your scope only to have the weapon randomly fire everywhere but at what you’re aiming at. There is also no weapon upgrades or modifications which really lowers your feeling of individuality and purpose.

These issues could be addressed before launch but with copies already being produced and shipped to distributors, it may fall to a big day one patch to solve.

In Star Wars Battlefront there is no subtle crouching in bushes, action is loud, obvious (big red laser beams!) and fast paced. If we combine this with the lack of classes and weaponry mentioned earler, then we must assume Dice have tried to create a casual game. If this was indeed the goal then they seem to be on the right track. The question if you can enjoy a more casual Battlefield game is only something you can answer.

By far the best part of the game was how silky smooth it ran. I ran a GTX970 which meant everything could be set to max with a rock steady 60 FPS. I experienced no frame rate drop or stutter. There was a little server lag but nothing game breaking seems we are still in Beta. The sounds were also another delight. If you closed your eyes you would feel like you were watching Star Wars on the big screen. The noise of blasters and X Wings engaged in battle was epic. Rigs with a good sound options will enjoy this.

On a Geforce GTX 660 Ti the game ran 45 FPS on high (2560×1080) which is also pretty impressive. At medium the game still looked great and we were able to reach 60 FPS. The open beta was using DirectX11 but it is rumored that the final game will be using DiretX 12. DirectX 12 is interesting because it significantly reduces the need for CPU power.

Star Wars Battlefront is going to be launched on November 17th on next gen consoles and PC. Stay tuned for our review of the final game.