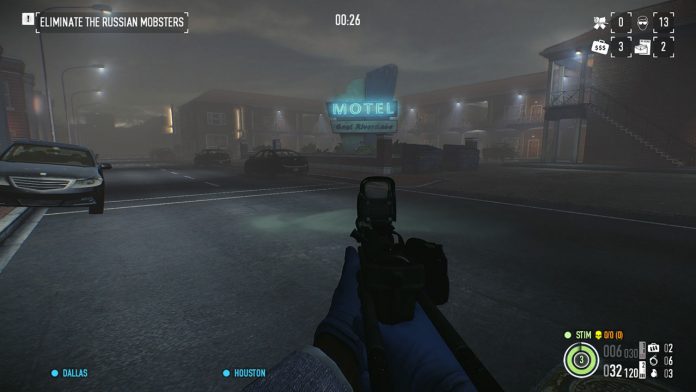 This Payday 2 guide contains all the information you need to complete the Hotline Miami DLC heist. It is a 2 day heist which can only be completed by going loud, stealth is not an option. Your main objective is to kill a Russian mobster named “the Commissar”. On the first day you need to trace the location of his hideout. On the second day you will chase him through a ruined building, kill him and steal his coke.

For your convenience the Payday 2 Hotline Miami Heist guides have been split into several posts.

The Hotline Miami heist features pre-planning. You have a total of 6 favor points to spend on the following attributes:

Use the first 2 favor points on “Iljia the Sniper” and “Reduced Mobsters”. The sniper is always a good choice because he will be killing cops during the whole length of the heist. Reduced mobsters will help you finish the first objective faster. Use the other 4 favor points on a Doctor and an Ammo bag. Place them both on the “motel rear”, this way you will have cover from snipers.

Don’t pick “Delayed Police Response” since it is only a delay of 30 seconds and it makes it so you can only take one Doctor or Ammo bag. The cops will also help you completing the first objective by killing mobsters. 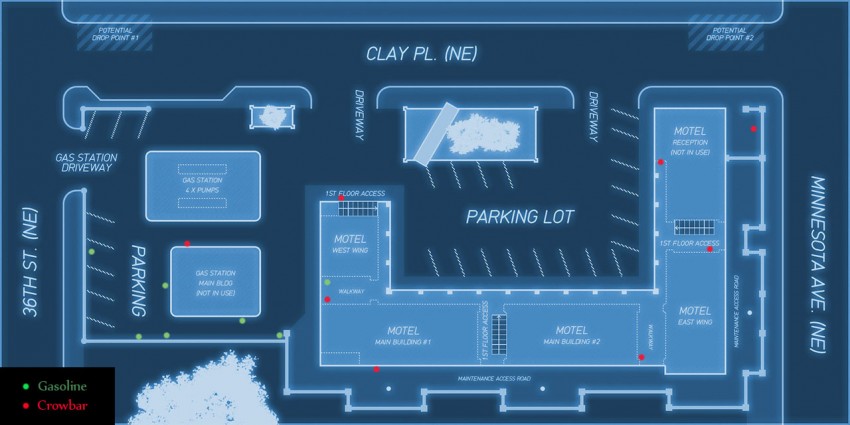 Entering the driveway and parking lot of the motel will starts off the Hotline Miami heist. You can already kill any Russian mobsters you see.

To continue to next objective as fast as possible you need to kill all the Russian mobsters. They will be hiding around the front and back of the motel as well as inside the rooms. Watch out for the laser trip mines when entering a room through the front door. Shoot at the mines to blow them up. 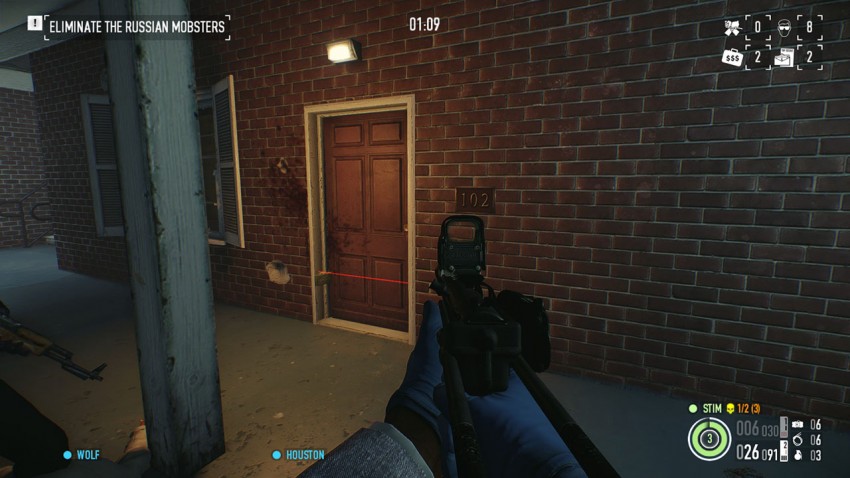 After a couple of minutes the surviving mobsters will either run away or get killed by the cops.

Next up you need to find gasoline to blow up some cars. The gasoline can be found around the shop of the gas station on the right side of the motel. Look at the map at chapter II. Pre-planning and Map of this guide for possible locations. 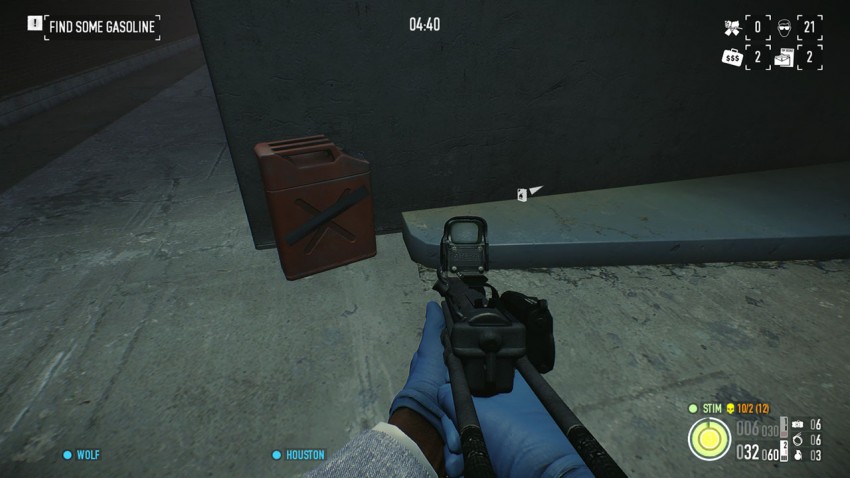 After picking up the gasoline, you need to set fire to 4 cars. Go to the parking lot in front of the motel and drop the gas canister on top of the hood of a car. Before you shoot the canister to make it explode, check the back of the cars to see if there is any money in it. Once all 4 cars are on fire Bain will start tracing the call. Sadly though he doesn’t manage to get the location just yet, so on to the next objective.

Now you need to destroy the gas station. First go to the starting point and pick up the c4 out of the back of the Delorean. Go to the gas station to the right side of the motel. You need to plant the explosives on each of the 4 gas pumps. Now run to safety and enjoy the fireworks! 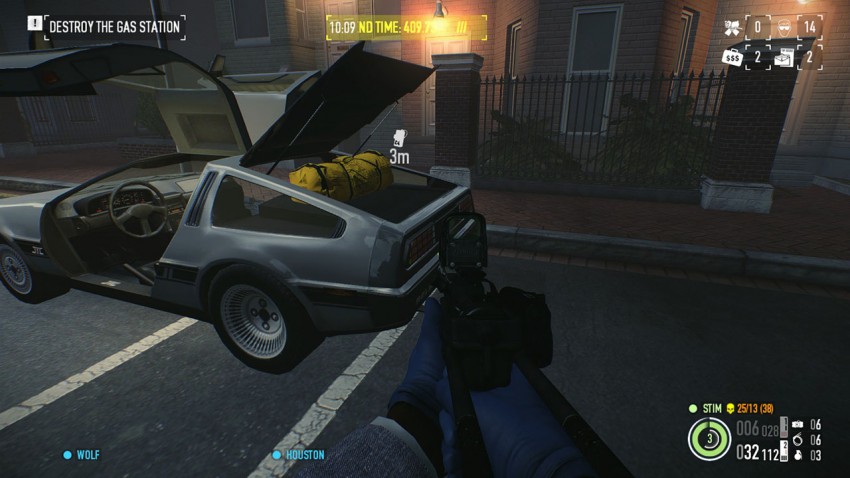 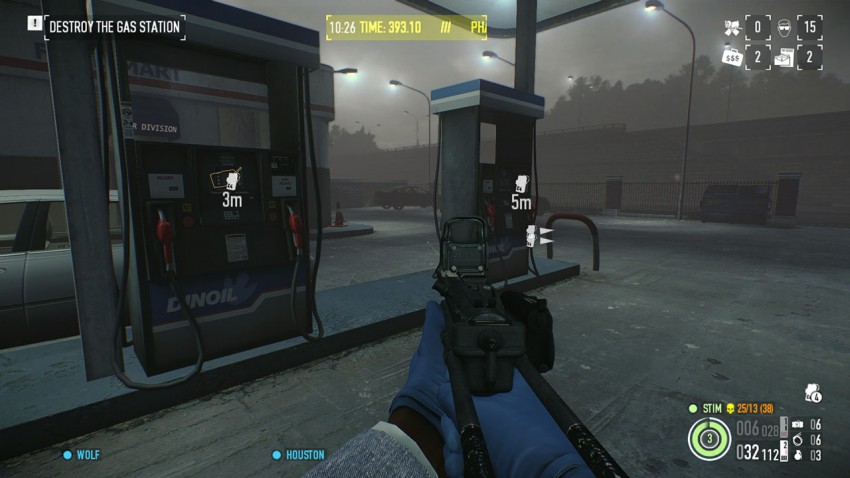 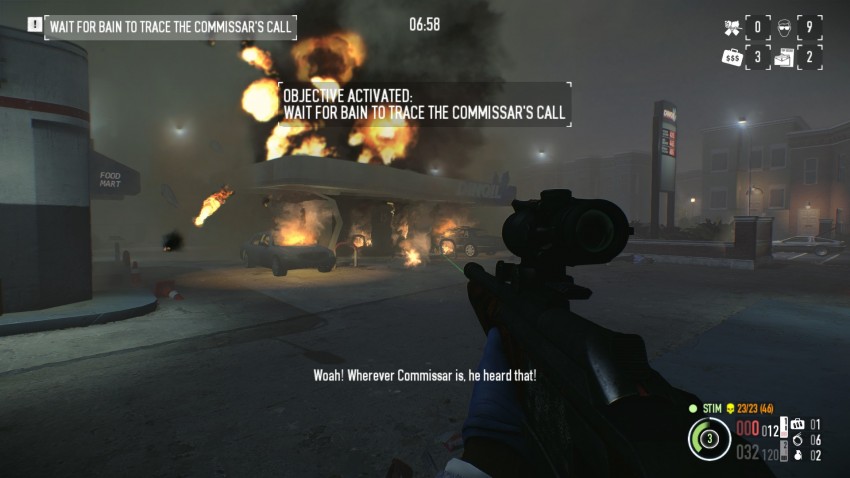 Once the gas station is blown up Bain will try to trace the call again. Luckily he succeeds this time. He will tell you the district the Commissar is hiding at, remember this name since you will need it at a later objective. Don’t worry if you missed it, he will repeat it once you enter the basement.

6. Wait for Bile to drop the present

Since you need to wait for Bile to drop a present, you have some time left to search for the hidden vault. It is located in one of the apartments on the ground floor of the motel. Move away the carpet and reveal the hatch. You can look for the vault at any point during the heist. To pull this open you will need a steel cable which Bile is going to bring to you by helicopter. He will drop a bag in front of the motel. Watch out for snipers when you are going to pick it up.

7. Break through the hatch

Now that you have the cable from Bile you want to connect this to the pick-up truck parked in front of  the room with the hatch. Throw the bag at the pick-up and connect the other end of the cable to the hatch. Start the engine and wait for the hatch to be pulled open.

8. Defend the pick-up and keep the engine running

Make sure to defend the pick-up truck from the cops who will try to turn off the engine. If the engine gets shut down, go to the driver-side and turn it back on again.

9. Get inside the basement

Once the hatch is open you can enter the basement which is closed by a metal gate. You can open it with a drill, a saw or by using c4. 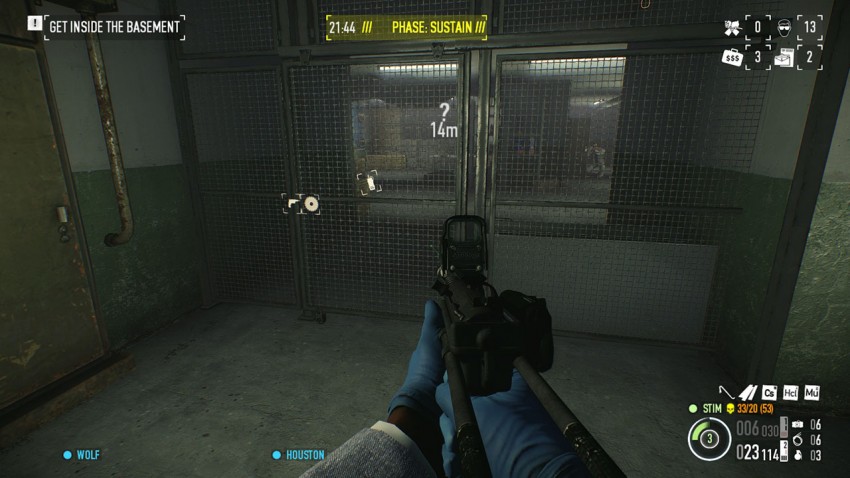 When the gate is opened go inside and kill the remaining mobsters. Bain will tell you the location to where he traced the Commissar’s call, remember this location because we will need it for the next objective.

10. Search for the correct address

Make sure you have a crowbar, most times there are 2 to be found. One is located in the basement behind one of the two gates, which can be opened by using a drill, a saw or c4. The other one spawns on a random location, marked on the map at chapter II. Pre-planning and Map of this guide. You can start looking for a crowbar at any time during the heist.

Now comes the tricky part, Bain only managed to trace the Commissar’s location to a certain district. It is up to you to find the correct address. Look for a map of the area, it has 5 districts pointed out on it, each with a picture of a product. Find the district that Bain traced the call to and check which product goes along with it. The list is as followed:

There are numerous crates standing in the basement. Use the crowbar to open them and look for any crate containing the product that belongs to the district where the Commissar is hiding. Take the barcode from the crate and insert it in the computer at the end of the basement. Wait for the pc to finish analyzing the barcode and defend it from any cops trying to shut it down. Don’t forget to pick up the result when it is finished and get ready to leave. 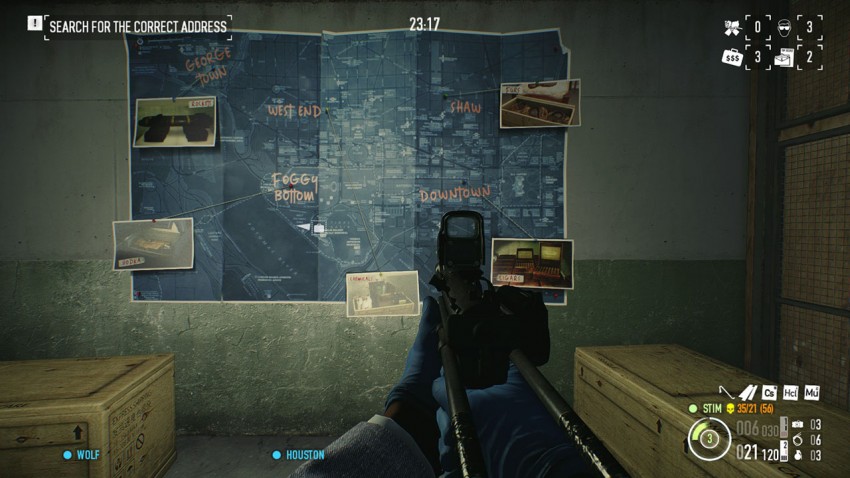 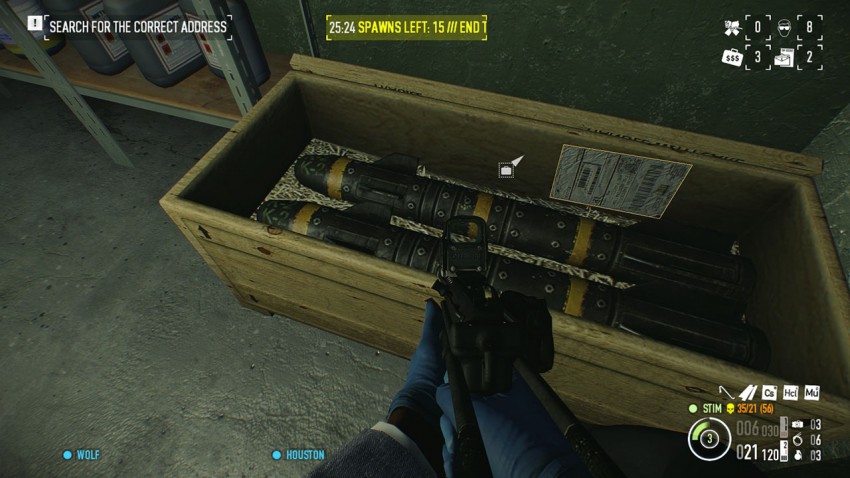 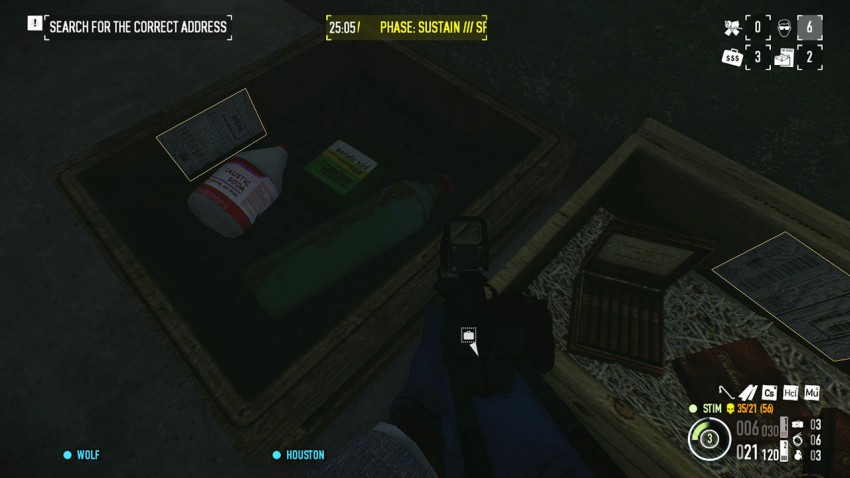 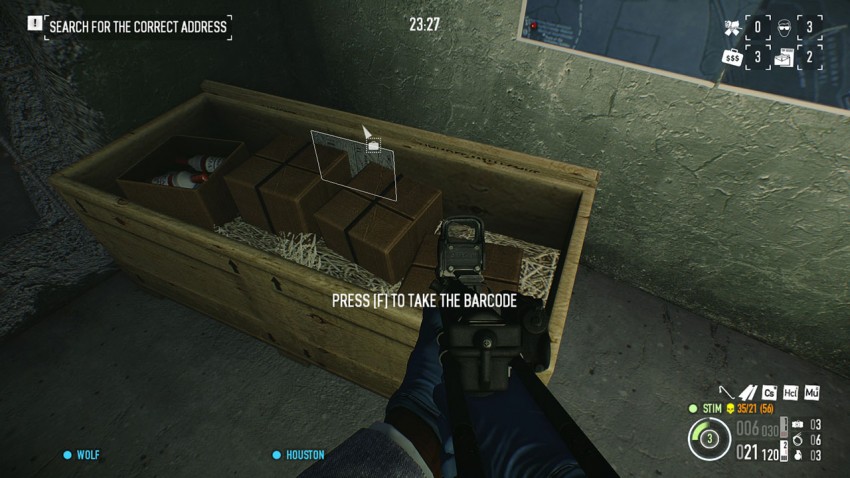 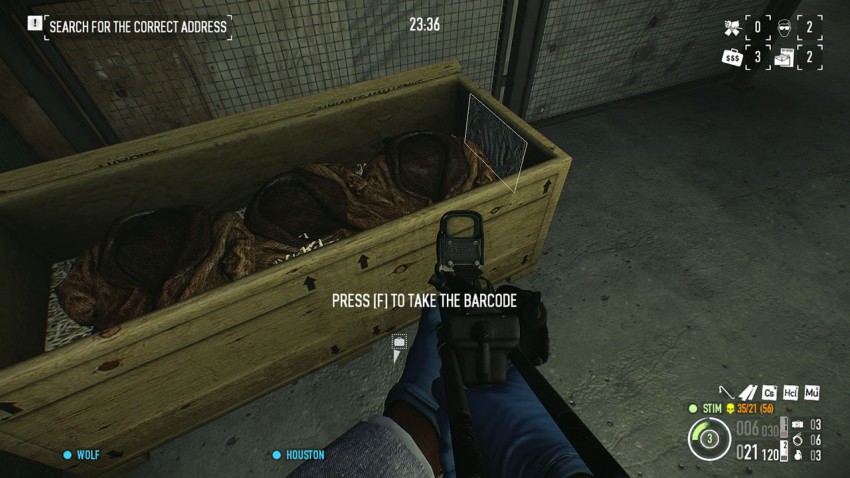 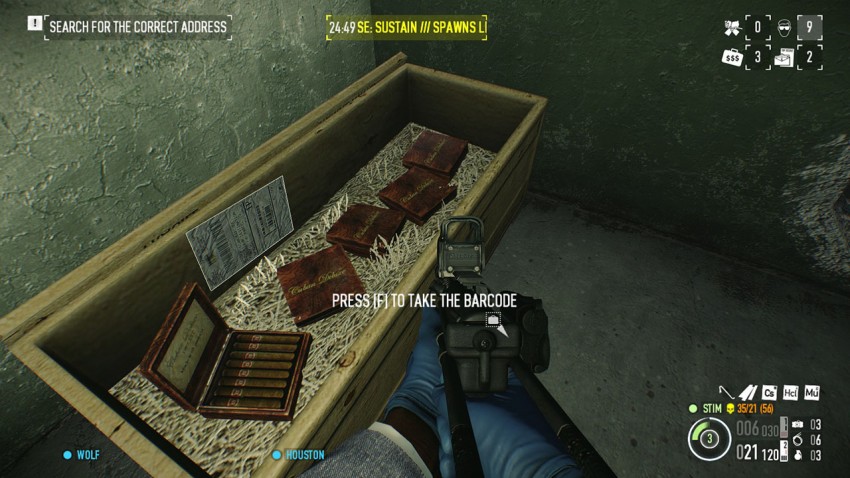 Now that you exactly know where the Commissar is hiding, it is time to make your way to the Delorean and leave the scene. When exiting the basement try to go to the back of the motel. Here you will have cover from snipers. Make your way to the escape vehicle and get ready for day 2 of the Hotline Miami heist.

The Hotline Miami heist is not your standard heist where you need to steal cash, gold, jewelery or other valuable items. This means that if you only follow the main objectives the only payout you get will be from completing the heist. But there are several ways to earn some extra cash for those who want it. Everything you find needs to be dropped off at the Delorean, and you can do this at any time during the heist. However I recommend to do this between police assaults, this way you will have a greater chance of surviving in the open. Here is a list of all the possible loot spots:

This is all you need to complete the Hotline Miami heist day 1. To continue to day 2 click on the link below or you can check out the other Hotline Miami guides at chapter I. Hotline Miami Guide Series of this guide.