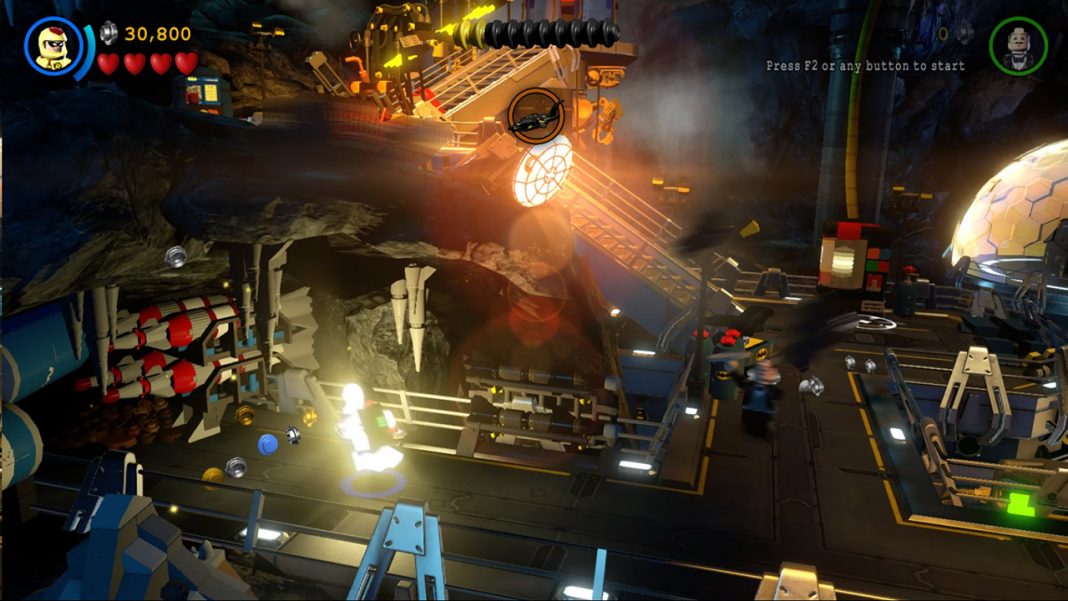 In level 2 of LEGO Batman 3 Beyond Gotham “Breaking BATS”, Batman is being mind controlled and it is up to Robin and Alfred to defeat Batman without hurting him. The boss in this level therefore is Batman himself. Alfred has some unique abilities such as the ability to walk through fire using his food tray.

This video is was captured in story mode meaning it only the characters that are available for this mission were used. Free play will be needed to 100% the level. 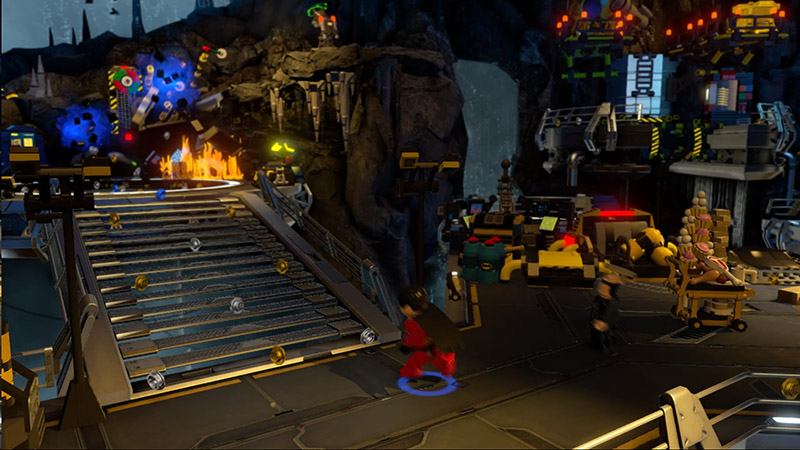 Your main goal is to get to Batman. Robin and Alfred need to snap him out of whatever mind control he is under. To achieve this, you need to climb onto the ledge Batman is currently on.

Run around and break everything. Now use your acrobat stick to pull down the lever and swing across the handles to Batman. Shake off the bats. Batman will throw you off the platform and teleport away.

Batman has teleported to another ridge. Your goal is once again to reach him so you can get him to snap out his crazy attitude. To do this you will need to move to the right of the room. 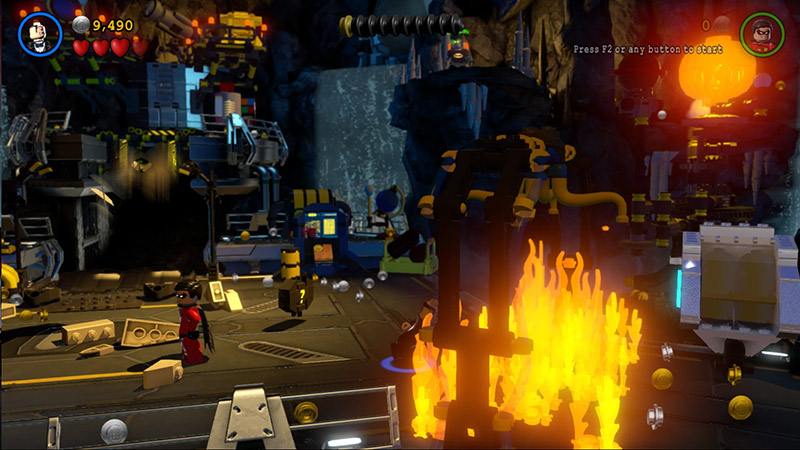 Switch to Alfred and move through the flames. Alfred will automatically use his  serving tray as a shield. Use the blocks from the machine Batman blew up to build a switch. With the other blocks you can build a sprinkling system to put out the fire so Robin can join up with you.

With Robin in his Techno Suit use the switch you build. Now you can rappel to the platform Batman is on. Again, Batman will throw you off the platform and teleport away.

Batman keeps teleporting around. This time he ended up in the middle of the next room. 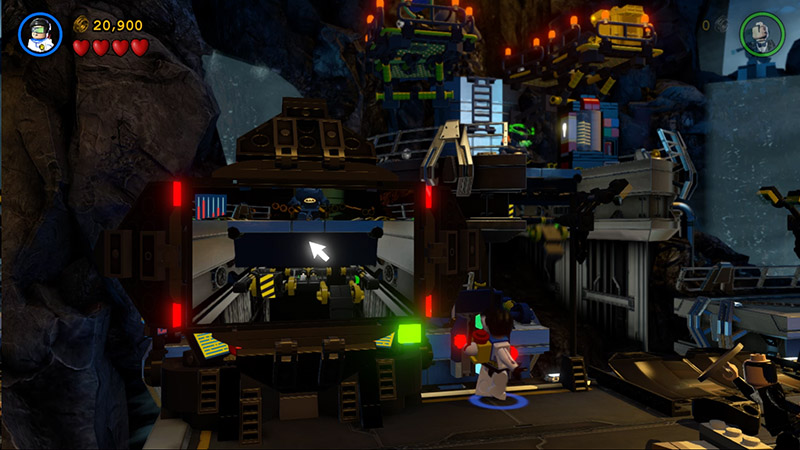 Use blocks to build a computer on the left of the platform. Switch to your Techno Suit and solve the puzzle to drop the stairs.  Now you can reach Batman and he will again blow up stuff. This time he disappears inside a cave.

With the Illumination Suit you can see in the dark. Be aware that you need to charge your suit. Enter the cave and pull aside the rubble in your way.

Batman has escaped into his Batmobile. You need heavier equipment to deal with him. 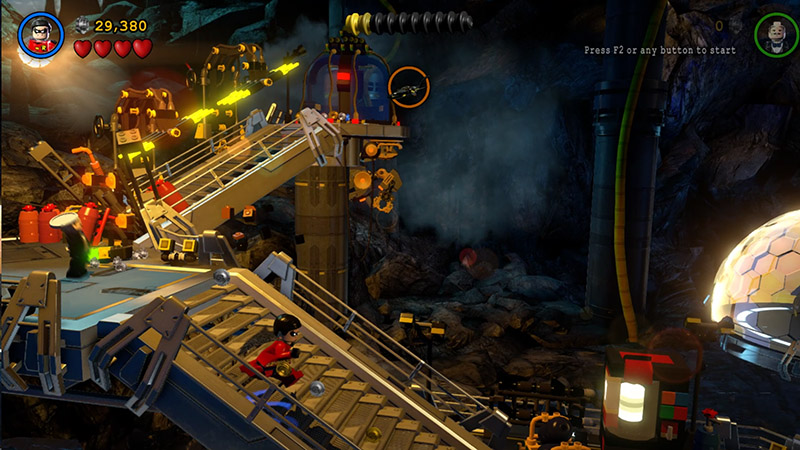 Break all the items you can. Charge your Illumination Suit and at the bottom of the stairs and move to the dark area on your screen. 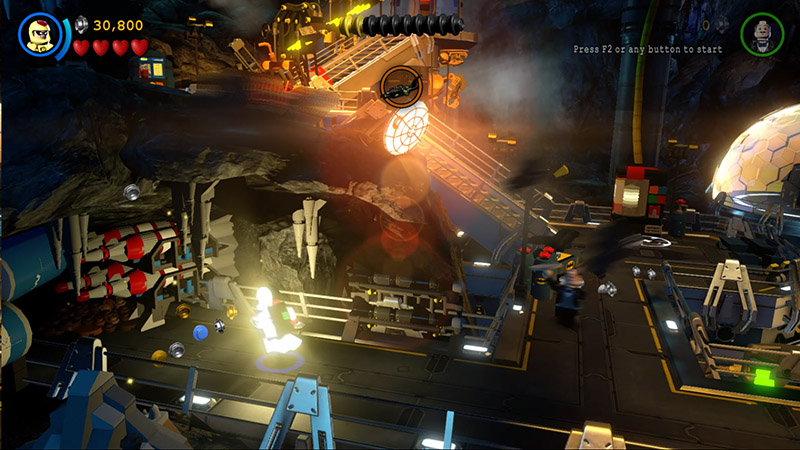 Break the items and build a lever. Us your techno suit to use the lever. Now you can enter the Batboat and shoot at the Batmobile with Batman in it. You can shoot away about 1/3 of his hp bar.

Batman is still in the same position. Since the Batboat is destroyed, you need another bat vehicle to shoot him out of the Batmobile. To do this you first need to reach the elevator. 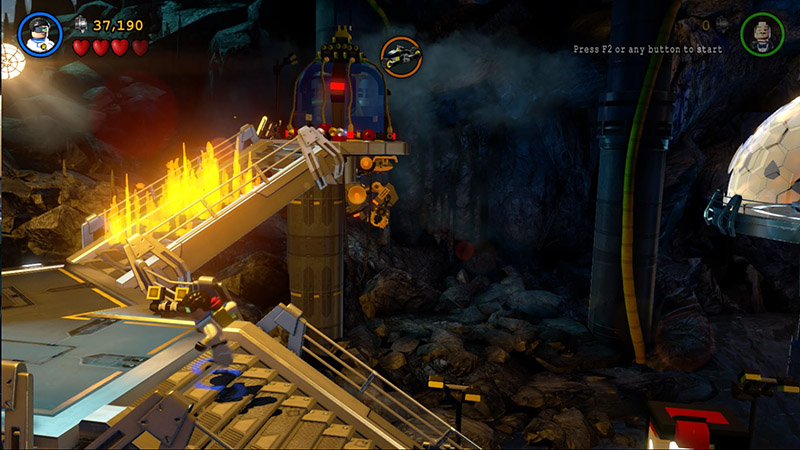 Move up the stars again. Use Alfred to walk through the flames. Build a fire extinguisher so Robin can join up. Now you can enter the elevator. Both characters need to stand on the red button to activate it. 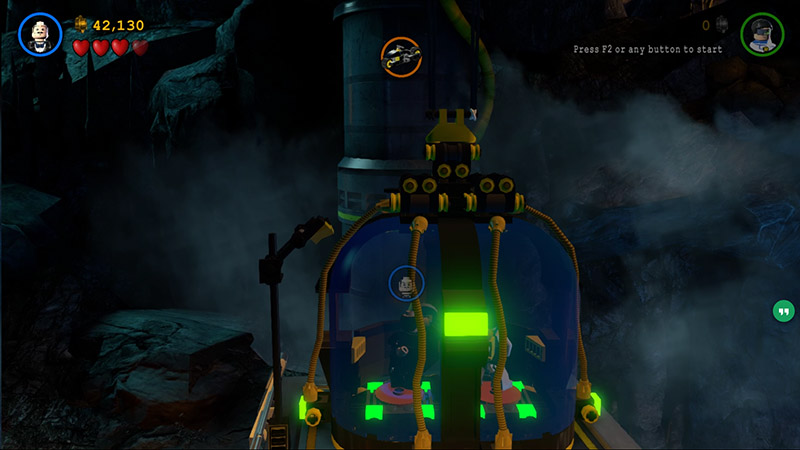 Build the Batbike so you can fire at Batman again. This time you will get him down to around 1/3 of the Batmobiles health.

With the Batbike down, you need to get to the last vehicle available: the Batwing. 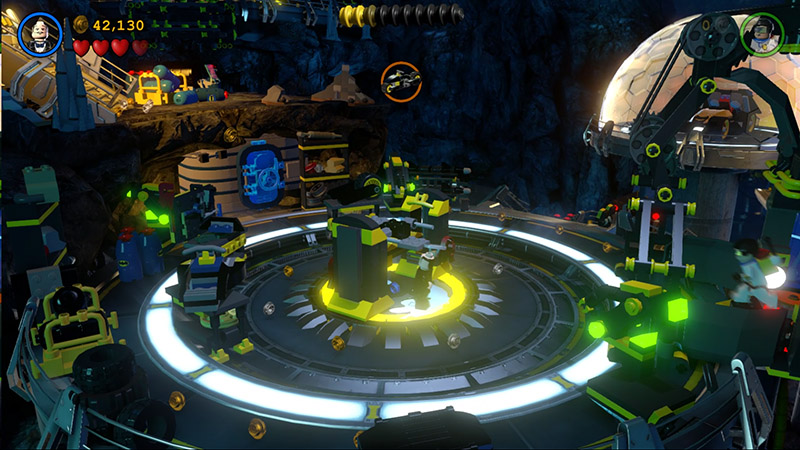 With Robin, change to your Hazard Suit and collect all the building blocks.

Move up the ladder and assemble the hatch Toy Wonder can go through. Use your Techno Suit and send your Toy Wonder trough the hatch to the other side and pull the lever to your left. This drops a bridge so you can continue to the next platform. 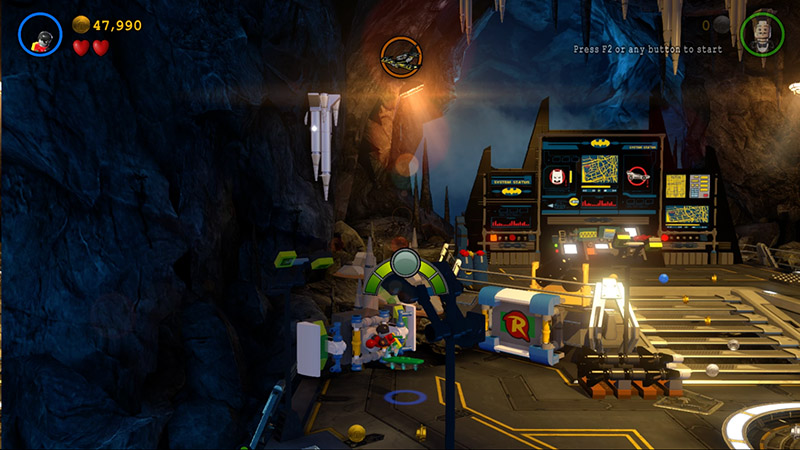 Build the Lego machine and feed it the required blocks with Robin’s Hazard Suit. Note: if you feed the machine more blocks after you have received the required item you can get extra coins! Use the computer to get to the Batwing.

In this room you can get Batwing, Batmans airplane. 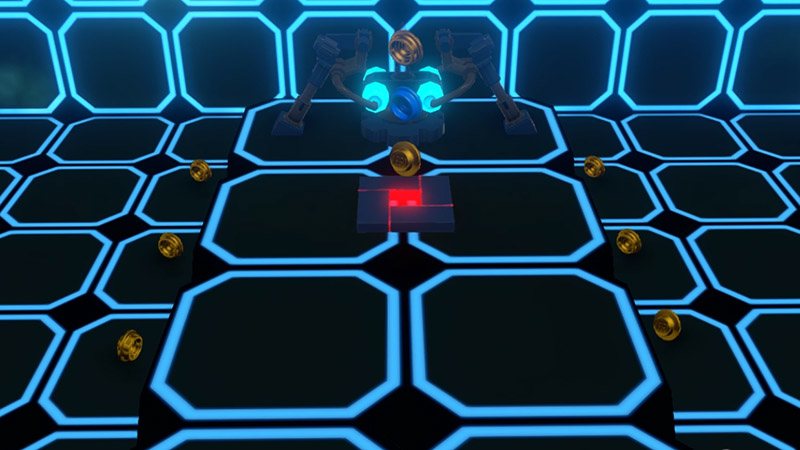 Move to the platform with the machine on it and step on the red buttons. Be careful not to walk on cubes that turn red. You need to stand on 3 buttons to get the batwing.

Batwing is ready for action, but you need to reach it before Batman decides to blow it up! 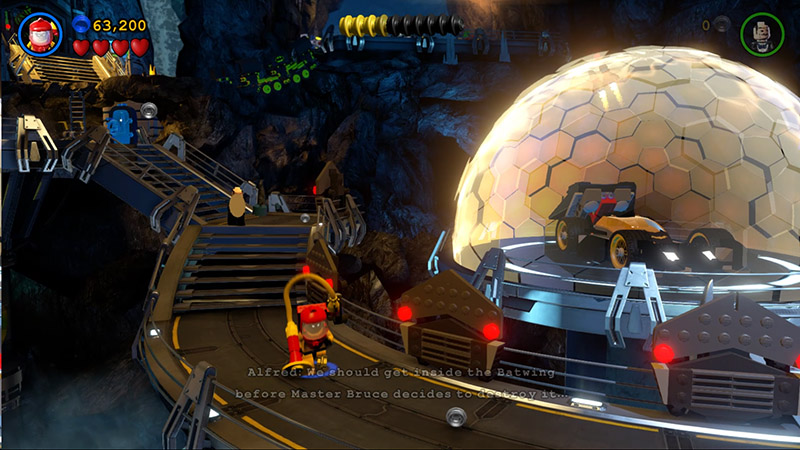 Run towards the Batwing. Pull the bridge towards you to enable you to run across and enter the Batwing. Now you can disable the Batmobile.

Even with the Batmobile destroyed, Batman doesn’t surrender. Calling his bat-friends he turns himself into a giant Batman. 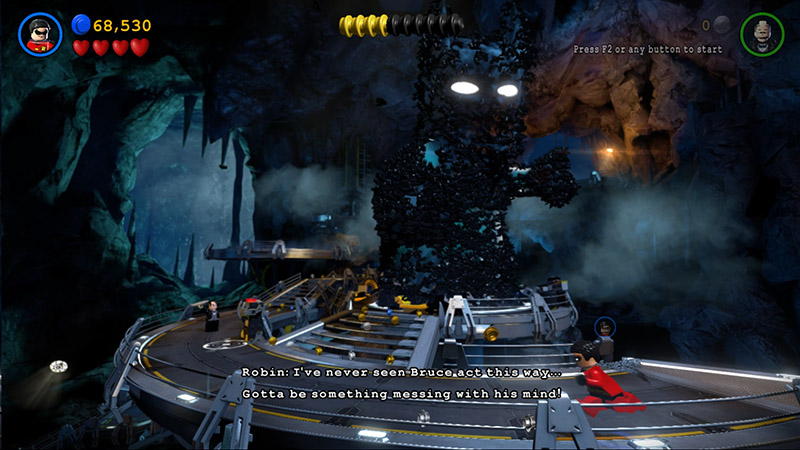 Try to avoid being smashed by Batmans bats. Throw your weapon at Batman. 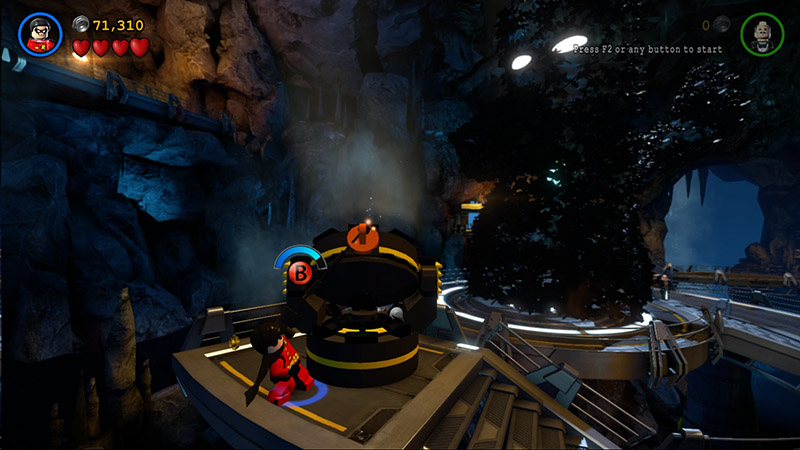 He will throw items you can use to build a spotlight and aim it at the bats. Now you can smack Batman on the head. This process needs to be repeated 3 times (3th time you will build a sound machine) to disable Batman. Now all you need to do is hope Batman will come to his senses before he drops you off a cliff.

Suggestions or questions? Feel free to post them in the comments! 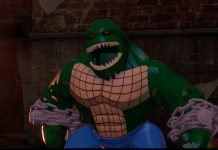