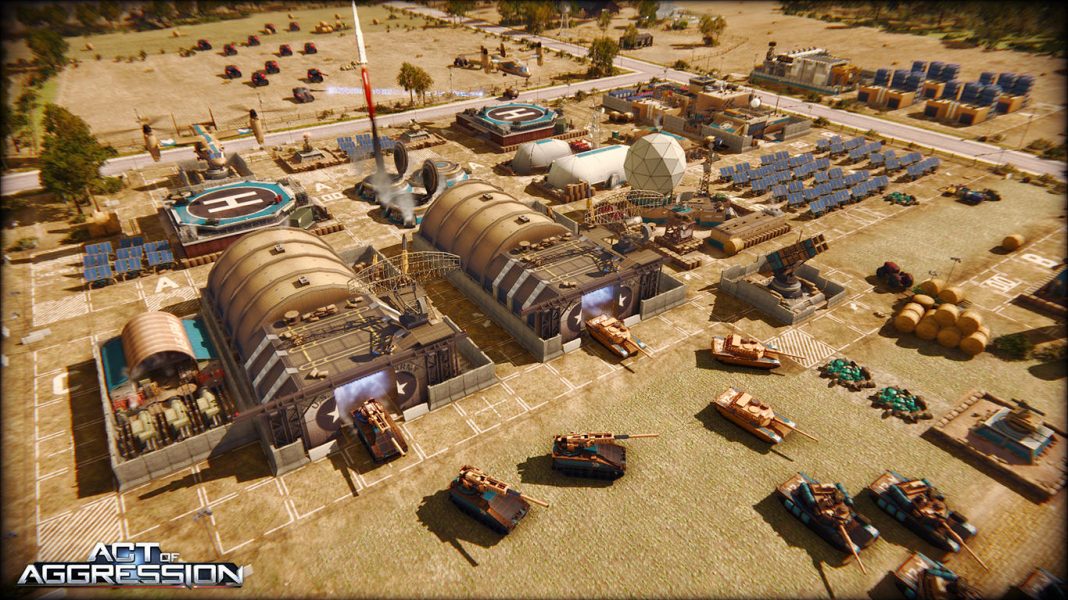 Act of Aggression looks and feels like a traditional RTS. To me it feels very similar to Command and Conquer generals. At the same time it plays completely different because there is just so much more depth. We already talked about the three different resources and how each game is different because they are procedural ally generated. This impact is increased because your first refineries will be depleted after 20 minutes. That means map control becomes very important. You NEED access to those resource deposits, even if you don’t need them right now. There are also some tiny complexities related to “harassing” harvesters. I put a few tanks on a road that were blowing up oil tankers. Guess what… The explosion that followed damaged my tanks and it will even wipe out smaller units! A chopper next to a refinery that is about to blow is also an accident waiting to happen.

But there is more… The maps are completely symmetrical. If you check your opponents screen you will notice his miny map also shows his base in the bottom left corner of the mini map. It no longer matters where you start! They are also quite large. Even the smallest two player map will be bigger than C&C generals maps ever were. This does not mean the game has a slow pace. Instead the game has a network of roads that allow your vehicles to fast travel and get to the action quicker. This also makes ambushing easier because units moving long distances will always stick to these roads.

Interestingly Act of Aggression adds a lot of defensive measures. Units can be upgraded to shoot at incoming enemy missile fire (most units shoot missiles) and mitigate damage. Even the super weapons (tactical nukes) can be shot down. Each faction has their own way of dealing with this. The US Army has the famous patriot static defense systems that eat a lot of power. It can also be used to defend against land and air attacks. The Chimera have a mobile anti-ballistic missile launcher that can drive itself to any position on  the map. It can be upgraded to a maximum of 4 anti-missiles. So if your enemy turtles in and constructs a few super weapons the game is not lost. Just make sure you have enough resources to keep pumping out these anti-missiles.

An interesting feature was borrowed from Eugen’s own Wargame: Airland battle game. Planes are constructed at the Air Control Center. However they are stationed somewhere off-map and will fly in with limited fuel and ammo when you order them to. The location of the Air Control center also has some strategic depth. It determines where the planes can enter the map, so it can be beneficial to spread them out. It can also be upgraded with an early warning detection radar to spot enemy planes.

The queue system is also very interesting. You can pretty much order any unit and building you want, even if you do not have the resources! This allows for easy planning. At the start of the game you are free to order up a few refineries and a couple of tanks and just wait for 5 minutes while you are scouting. However, a building will always wait on the first item in the queue. So if you have ordered something that requires 1500 aluminum and you do not have it the queue will never move on to the next item. Even if the next item could be constructed! You have manually cancel to unblock the queue. Raiding someone’s aluminum stash can really throw a human player off their game.

Finally the upgrades and units, there are just so many! The US Army alone features 23 buildings and 14 vehicles that can also be upgraded and retrofitted. For example the Humvee has 3 different versions; a gau19, tow2 and mk19.  And I didn’t even count the infantry!

Even though the game looks and feels like C&C generals it just became so much more by these little nuances such as the new resources, interesting build queue, anti-super weapons and multitude of units.

Multiplayer is as good as can be expected. This isn’t Eugen’s first RTS game so everything pretty much works. After you have registered your cd-key on eugennet you can easily join or create sessions. So far (early access beta) there have been pretty much 3 games available at any point throughout the day which isn’t surprising with +- 200 players online. Keep in mind that steam friends will not show up as friends, you will have to manually add them inside of eugennet.

Games can be set to free for all or teams (including 4 teams or 2 teams for 8 player maps). You can choose random or fixed starting positions, enable/disable super weapons, enable/disable observers, set a time limit and change the resource gather rate.  The only remark I have on the multiplayer is that there is no specific co-op content. I would have liked co-op operations like R.U.S.E had or even a Co-Op campaign like in Red Alert 3.

The engine seems similar to the one used in the Wargame and R.U.S.E. series. All the settings are there, including windowed full screen mode. If we look at the graphics then the unit models seem to have lost some detail. Another change can be found in the zoom level. If you zoom out enough the game will change to a Satellite View that simplifies objects. Overall the game still looks great, especially when missiles start flying around.

There will be an auto-detect settings script at first launch that will load the same level at different detail settings until the optimal settings are found. I ended up with high and 4xMSAA which resulted in +- 45 fps. This is fine for an RTS, but I personally prefer a higher frame rate. So I reduced the 4xMSAA and increased my fps to +- 56 fps at 2560×1080.

The game was hard on my graphics card (a Geforce 660 Ti) that showed a 99% load throughout the game. My cpu (i5 2500K@4.4 Ghz) was only showing 10%-30% load. Ram usage was reasonable with about 1GB of system ram and 1600MB of dedicated video ram. I expect this game to run smooth on lower end systems because cpu usage is so low.

Last but not least; Act of Aggression features three factions that are vastly different. They all harvest the same resources but their upgrade path and units are completely different.

The US Army is the most traditional faction. It features real world units like the Stryker APC, Abrams Tank, Stealth Bomber and the helicopter gunships (named after the Apache AH-64E Guardian). They have the cheapest refineries and their tankers have the greatest capacity.

The US Army uses a straight forward approach of escalating commitment. You start the game at Defcon 3 which enables 10 basic buildings. During the game you will upgrade to Defcon 2 which unlocks more advanced facilities such as heavy vehicle bay (tanks, artillery, MLRS), the helipad and air control center (aircraft). At Defcon 1 you can expect tactical nukes, anti-ballistic missiles, and access to the best tech upgrades. This is also required to harvest the red resource Rare Earth elements.

Once in Defcon 2 the US Army can easily dominate the map because they can field the inexpensive FOB (forward operating base) which allows construction of buildings around it. So you can setup defenses at choke points, build secondary bases or simply surprise your enemy. At the same time they are the only faction that can “plop” defense turret anywhere on the map. This is ideal solution to defend your refineries in the early-medium game.

Overall the US Army is a traditional but powerful faction. The have the largest section of immediately available units and can dominate the map. Their downside is that their units are often one-purpose and defenses require (a lot of) power.

The cartel are all about stealth and large bases. They feature fragile and expensive prototype units that construct a single large base. The upside of this base is that buildings can be deployed further away from each other. The downside is that there always has to be a link, making map control by defensive buildings not an option. There are even some buildings that can only be attached to other buildings.

The Cartel features a two tier system differentiating between the limited Private Military and the more advanced Black ops. The private military only has 6 buildings, they can field about 10 units. It will take a few requirements and a hefty amount of resources to unlock Black ops. However once you do you get access to cool features such as stealth tanks and stealth generators and of course the super weapon and it’s counter.

The Chimera are a jack of all trades that force you to make an early game choice: defense or offense. The defensive shield protocol will unlock defensive units and upgrades such as the anti-ballistic missile launcher. The sword protocol will unlock the heavy vehicles bay, which includes tanks and rocket artillery, and a super weapon.

The Chimera don’t have strong early game vehicles. Instead they can construct an affordable helipad. Their helicopters are awesome because they can be upgraded with additional ATGM rockets and even anti-air missiles. In fact most of their units have multiple weapons and a dual purpose. For example the anti-air unit can be upgraded with ATGM missiles to fire on tanks.

Eugen called this faction a jack of all trades but masters at none. The last line is a bit harsh because they have a pretty impressive array of units at their disposal and can generate both aluminum and cash.

I was disappointed when Command and Conquer Generals 2 was cancelled. Luckily so was developer Eugen so they decided to create their own classical RTS! Act of Aggression successfully combines the familiarity from classics like Command and Conquer Generals with state of the art graphics and gameplay enhancements. It plays great, looks great and adds a lot of exciting new gameplay features. The AI is really challenging and the factions are diverse. The procedurally generated resources add a whole new dimension to scouting. One negative comment I can think of is that it lacks a dedicated co-op mode, skirmish against AI is all you get.