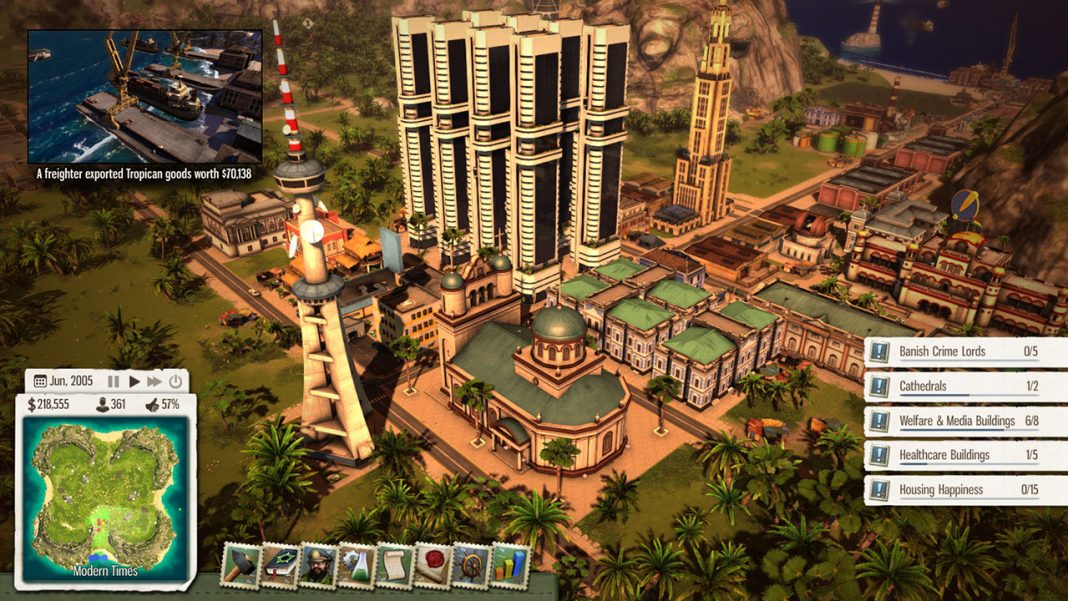 To facilitate progression through the era’s this the game now has a tech tree. The tech tree closely resembles the one from  Civilization V. No techs are optional, you will have to research all to progress to the next era. 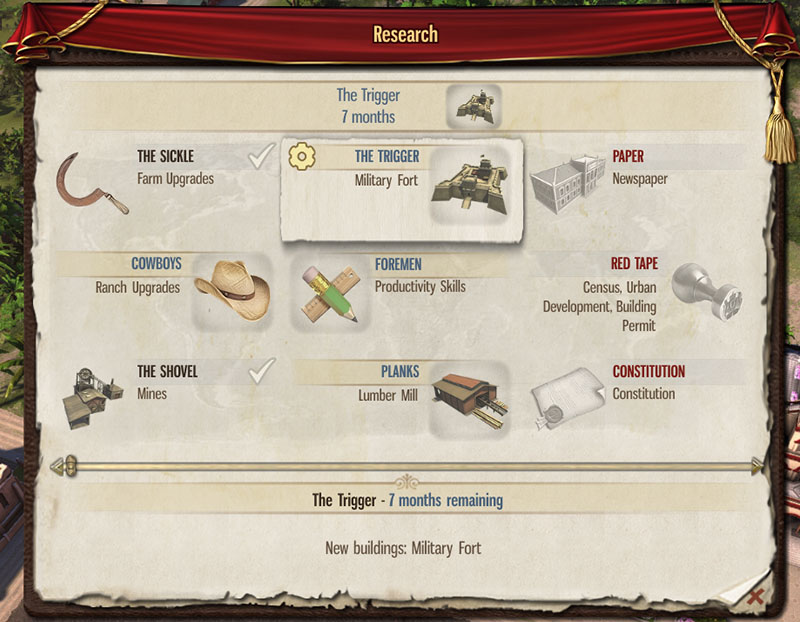 The research tree is yet another way the game encourages you to have a flourishing economy. After all libraries and observatories are not cheap. If your economy sucks, you will have to be patient.

At the start of the game the player is a governor in name of the Crown (England). The Crown has given the players a mandate of 5 years. After that it is game over. So your first objective is to get independent from the crown.

Claiming independence is not as easy as it sounds. It turns out the island comprises of two factions; royalists and revolutionaries. The royalist really hate you and their minds can never be pleased. Unfortunately you will start with 90% of your population consisting of royalists. To claim independence you will need at least 50% support so what does El Presidenté do about this? Well for starters you grow the island with an immigrant workforce that are more liberal. You are a dictator so you can also kill or banish some of the Royalists. Having a strong military also demands respect, especially from the revolutionaries.

You can claim independence once you get your support up to 50%; by getting more revolutionaries AND making them happy. At 50% you will usually get two options; pay $10.000 or endure the wrath of England. The second means there will be some serious combat that can literally turn parts of your island to ashes. If you already completely pissed off the crown it will always be fierce combat. Isn’t that awesome?

After becoming independent El Presidenté can enforce a constitution. Each era will introduce 3 new topics that each have 3 options.  Choosing one option will always upset one or more factions. Many of these options were present in Tropico 4 through buildings. For example the immigration office used to control your immigrants flow. Now these options are added to the constitution in the World War era.

Constitution options seem limited at the start of the game. But the furthere you get the better you realize how important they are. They do not simply influence your faction reputations. Think about letting only the wealthy vote? You might see a 70% approval rating. But what about those less fortunate? Maybe they hate you and become rebels and start uprizings. So you change to a democracy and find out only 40% approves! Lose the election and it is game over. Is there a road in the middle? Yes you can let only males vote. 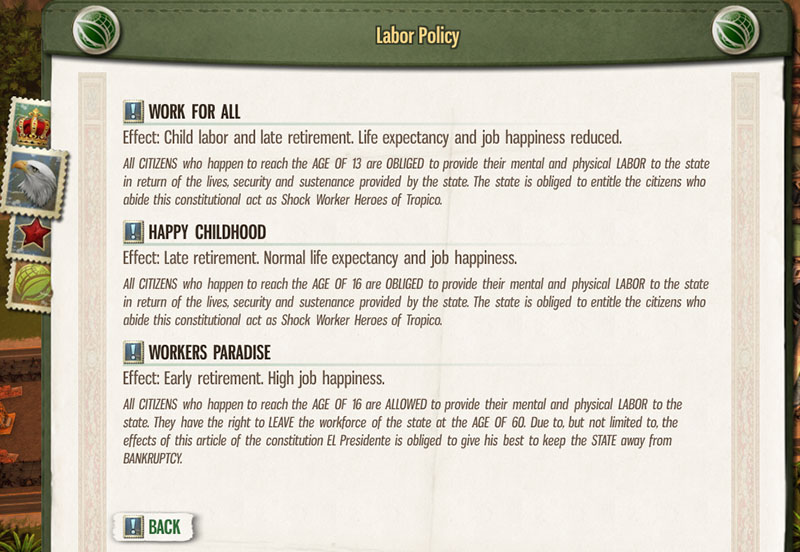 There are 12 choices to be made, each with 3 options. Each with a significant impact on the game. Fortunately the default options are pretty decent.

Tropico 4 did not feel like an upgrade to the graphics from Tropico 3. In Tropico 5 this has all changed. The game features a ton of shadow effects and texture quality has greatly increased. The game looks great zoomed in and zoomed out!  The game is only 2204 MB on disk, which is impressive.

At the same time the game now uses Tesselation. Unfortunately tessellation is a Direct X 11 feature. Therefore Tropico 5 requires a Direct X 11 graphics card. The only exception to this are some Direct X 10.1 cards from AMD, including the Radeaon HD 4000 series. Thanks too tessellation the game looks great and runs smoothly, even when zoomed-out.

For those of you that do not know tessellation; Tessellation simplifies objects when the player is further away. Therefore objects can be very detailed without slowing down the game. 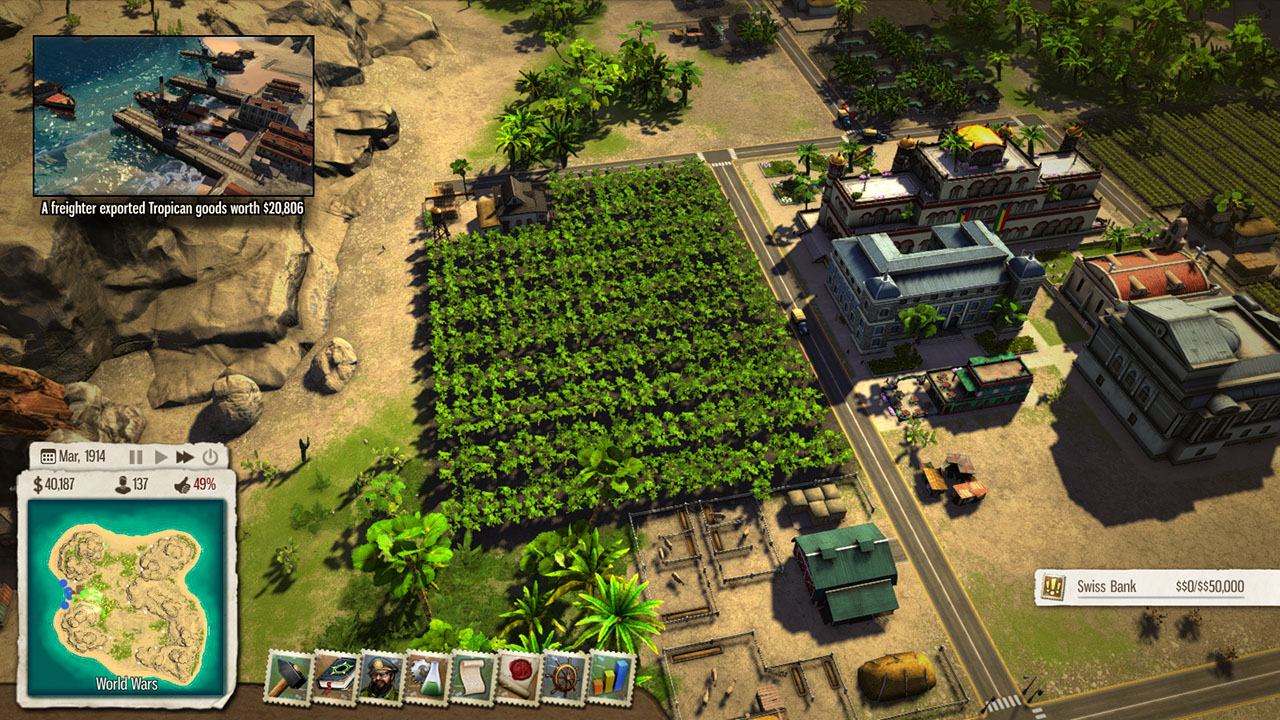 Zoomed out: There are crops, but which plants are we talking about? 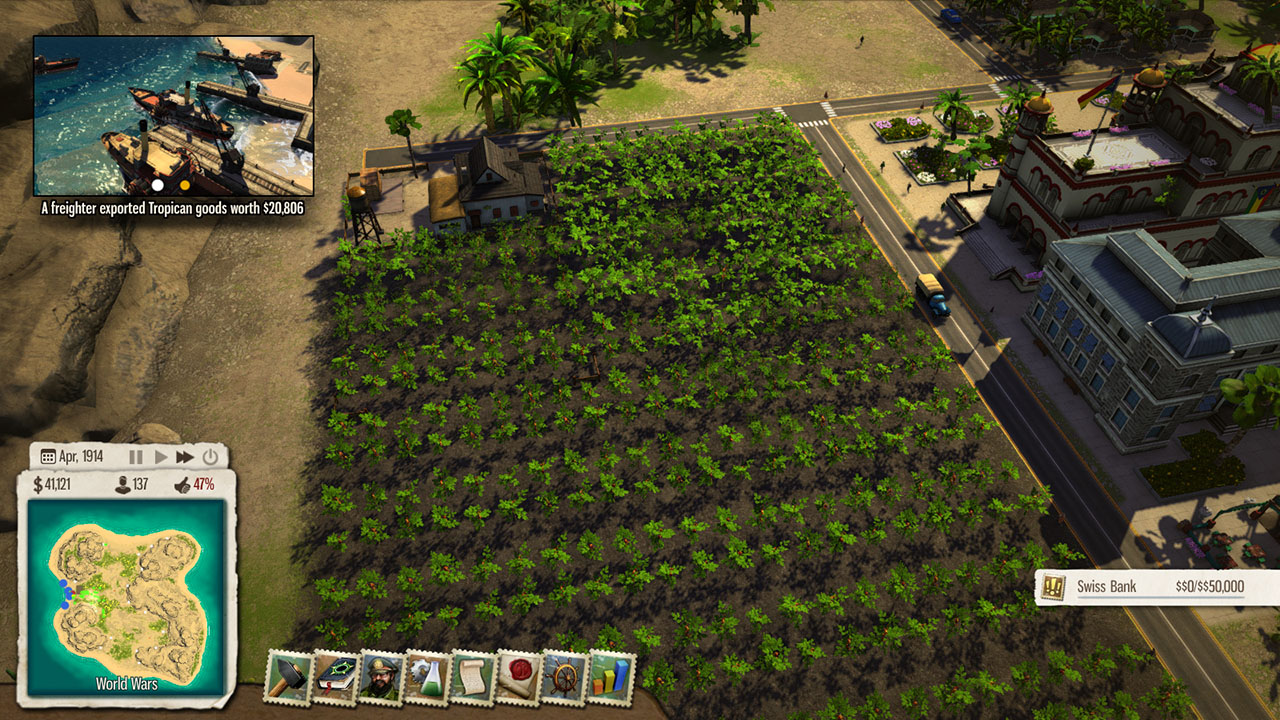 Zoomed in: Detail starts to load, we can begin to realize we are talking about pineapple trees with individual shadows.  Obviously you can zoom-in further for more detail.

Tropico 5 now features multiplayer. Up to four players can play on the same island. Players can win by preset objectives such as money or certain buildings. Unfortunately at this time multiplayer requires some serious patching. There are some serious slowdowns, roads cannot be demolished and the multiplayer server is offline a lot.

The game is also said to have a Cooperative mode. Unfortunately at this point it is not truly cooperative like Anno 2070. In Anno 2070 two (or more) players control the same treasury, buildings and units. In Tropico 5 each player will have a separate palace and treasury. The cooperative aspect is limited to connecting with road and  sharing construction workers, teamsters, power or giving each other money.

Tropico 3 and 4 featured a true agent system. You could follow around Tropicans and see their individual needs. When their need for religion became too low they would transport themselves to the nearest church. If they were hungry, they would grab a bit to eat. Obviously when simulating over 1000 inhabitants this requires thousands of entities for the game to track. This is practically impossible to combine with multiplayer.

In Tropico 5 you can no longer see which citizens are visiting your buildings. The building now simply states 149/200 Visitors. Meaning live simulation has been removed. Tropicans now sort of roam the map. Important Tropicans such as construction workers and teamsters are fully tracked though.

Finally there are some imbalances and bugs present in the game. Especially in the last Era there are some buildings that are just over powered. If  you would be happy with a factory earning $3000 in the Cold War then you will be amazed in the Modern times. You can boost this to $15.000 monthly with just 4 workers. At the same time there are a few industries that can only generate losses at the highest budget.

Combining the imbalances with the multi player issues it seems like the game could have used a bigger and longer beta period.

Tropico 5 is an awesome city builder. The new era’s , tree and constitution certainly add a lot to the game. I played through all missions of Tropico 4 without failing once. Yet my first attempt on Tropico 5 I ran out of time and got booted of my island. The game really forces you to rethink your strategies, each era! Internal struggles are not simply solved by providing everyone with a few buildings. Unrest has to be dealt with frequently. With the addition of better graphics and multiplayer I can strongly recommend this game. Let’s just hope the developpers read this and decide to implement a proper Cooperative multiplayer option.