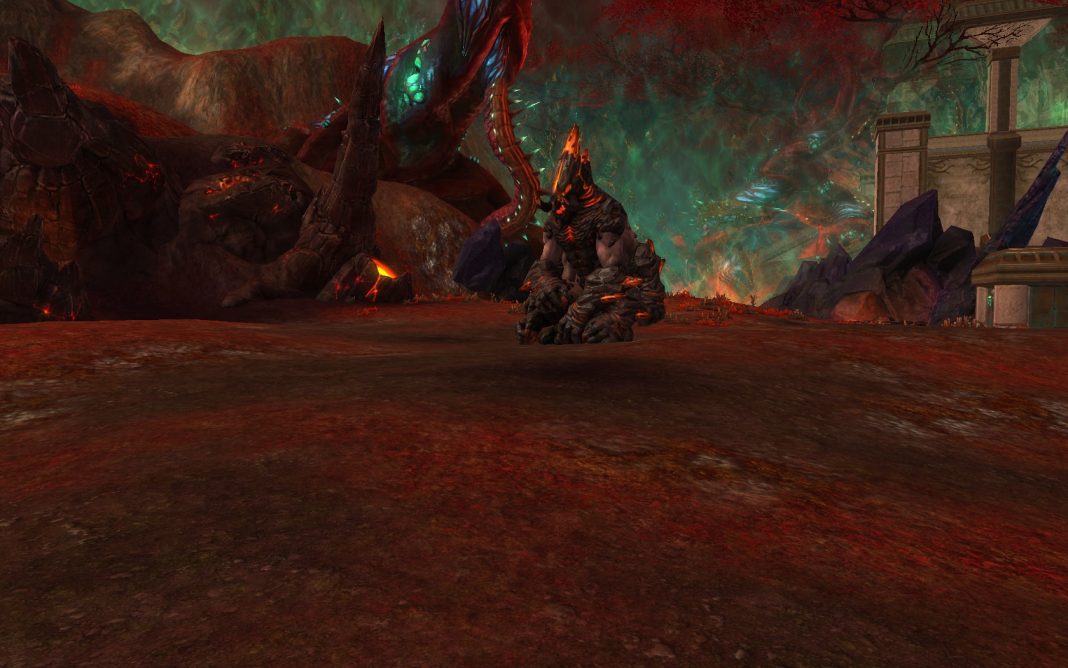 The cleric healing purifier soul is one of the most awesome heal specs. Instead of just responding to damage you can learn to prevent it by timing your absorbs. When your gear is good enough you can run Expert Dungeons without the party ever taking damage. There are many talent builds out there but this Blaze and Flame build is my absolute favorite!

Latent Blaze provides an amazing heal when the target drops below 30% hp, and Flame of Life AoE healing will make your wardens a run for their money. Other than that, your shielding extend the life of your targets acting as a buffer. Furthermore each shielded target has a significant damage reduction. Thanks to the Sentinel Touch The Light will allow you to instantly cast your long cast spells.

This guide will provide…

Sign of Anticipation: Increase dodge, parry, block and deflect by 3% for 15 seconds, applied by single target heal and absorption (Only when double purifier).
Eruption: Deal damage to the allies target when an absorb is applied (place on Tank!)

This Addon is a purifiers best friend. Most importantly; it allows you to track your  Burnout defbuff. Therefore you will immediately know when you can re-cast a shield. Furthermore it will track Symbol of the Sun and Symbol of the Torch. In this example I am also displaying players that have Latent Blaze. 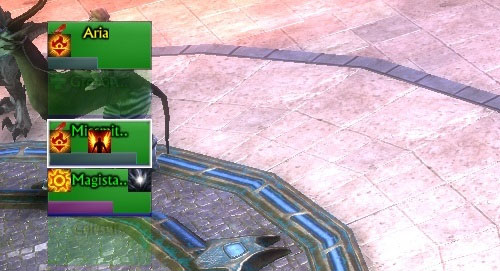 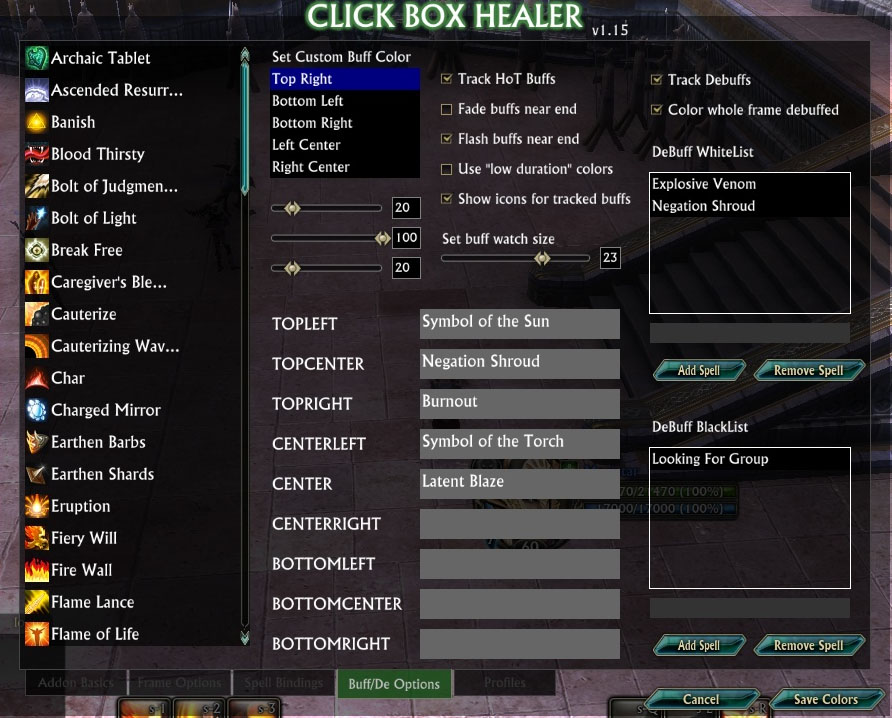 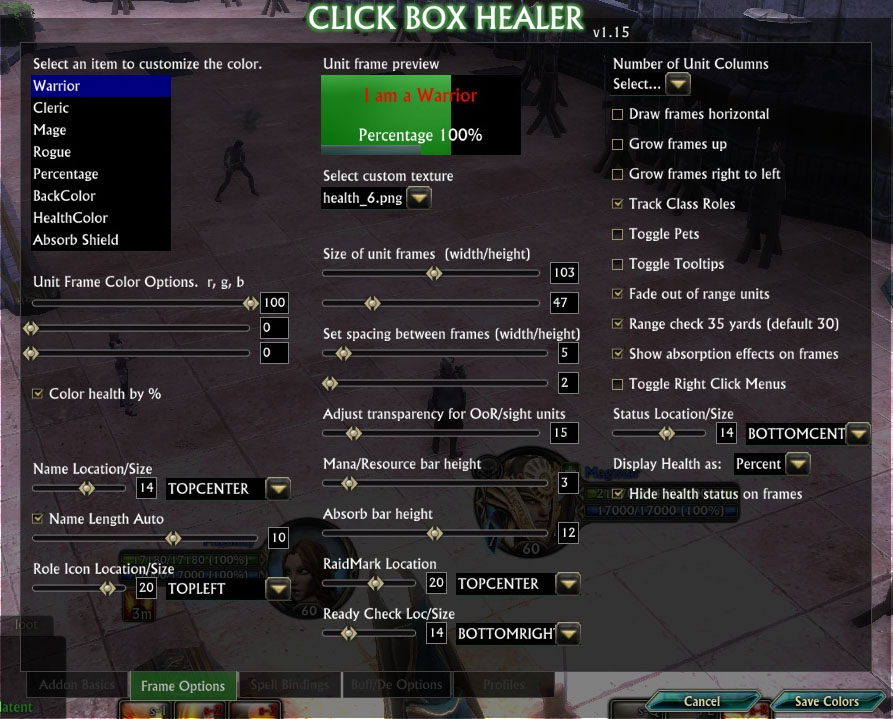 The following bonuses are applied when you apply a symbol (a shield):

Combine these bonusses with the fact that the shield itself also saves your target from a significant amount of damage you should always shield before you cast a heal!

Every time you apply a shield the target will receive a debuff called Burnout. This will prevent you from applying another shield. Casting a shield on a player with Burnout will result in “Cannot receive anohter symbol” . If you can use ClickBox healer to track it!

After some extensive testing, thanks yukelon, I figured out that you can pre-charge your Latent blaze before combat to create the ultimate tank saver.

Basically what you do is cast your combat buff Fiery Will (+25% healing/+50% absorption) 1 minute before the fight starts. Now use Flashover and then pace Latent Blaze on the tank. The Latent blaze will remember all your buffs and they stack!

The best part is that every ability is still available since you did all of this before the fight started. So you can immediately pre-charge a new latent blaze!

Flame of Life: Save the tank and give Wardens a run for their money

Flame of Life is one of the most overpowered healing spells in Rift. It will heal 300% of your health over 6 seconds. If you have 22.000 health it will heal 66.000 to 20 players. Individual players will receive 6 ticks of 11.000. This means it can even be used as tank saver because it will heal more then your regular spells, and it while it is doing it you are free to cast other spells!

Furthermore it applies a 20% damage reduction to the raid and provides a 5% damage buff.

The Warden Soul is awesome for AoE healing. However all warden spells have relatively low single target hps. This means even though they will heal the entire raid full, it will take a while for everyone to be healed. For example Wave of Renewal will heal 9724 on an individual player, after 3 seconds it will heal again. Creating only 6482 healing per second.

Bonus healing from timing your shields

Take a look at the following talent:

Flare up: Will re-apply your shields (Symbol of the Sun and Symbol of the Torch) if they are destroyed within 3 seconds of being applied.

Basically if you learn to delay applying your shield you will be shielding more effective. However keep in mind that NOT shielding your target will also mean he will not get the 4 buffs mentioned earlier. Therefore I do not recommend delaying for inexperienced healers as it will create spike damage when failing.

How to read this: Healing is a time based game. You have to decide who to heal, what spells to used and make the most effective use of your global cooldowns.

The red bars show your effective healing per second. Use it to determine the true power of a spell. A spell could heal 500.000 but if it is a 10 minute cast you would not defeat a single boss.

The blue bar shows the total healing done over the duration of the spell. For example Flame of Life will heal 66510 over 6 seconds. This is good to know in determining what spell to use when everything is going smoothly. 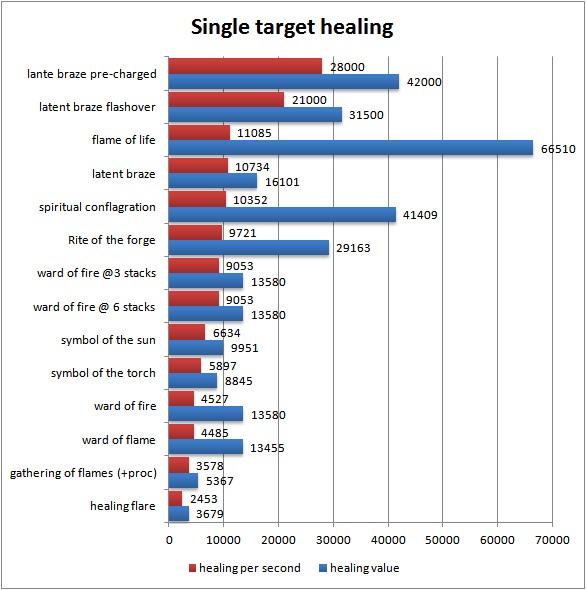 Keep in mind that this is a  simplification. Ingame tooltip values were used without taking into account additional benefits such as the 20% boost from feed the flames. However the bonuses apply to all healing spells.

That said: From this graph you should understand that:

Abilities and HPS math for Area of Effect

These values do not reflect additional buffs associated from shielding.

Instant spells are counted as a 2 second duration because the GCD associated is 1.5 seconds. This will usually mean that you cannot cast again during the 1.5 second period after pressing the button, hence a duration of 2 seconds to calculate the Health per Second.

Latent Blaze: obviously there is no duration when it is applied before the raid. During the Raid it will be 2 seconds from GCD if applied instantly with Touch The Light. Casting Latent Blaze without Touch The Light is not viable.

Inform raid about Rite of Forge

Healing Scenario's
Before the fightHealing a dungeon partyHealing a raid

*I do not recommend using purifier to heal a dungeon unless you have 2000+ wisdom.*

First decide which players get the strongest shield; Use Keep Symbol of the Sun on the tank, yourself and the lowest health target. Use Symbol of The Torch on the two remaining party members.

Always keep the tank shielded! After that cast Ward of Flame. After one channel you will have 3 stacks. Now cast Ward of Flame again to get 6 stacks. Re-Apply your shield if needed. If the tank is full health I recommend to save your instant Ward of Fire and use it to counter big hits. If the tank has lost health just spam it because it will save you a lot of mana.

If a party member takes damage place the appropriate symbol shield on him. This will prevent his/her death. When you find the time heal him with the instant ward of fire or healing breath/flare. You will probably have to alternate between healing the tank and healing a single group member.

If you know big party damage is incoming then make sure all party members are shielded in advance!

For heavy AoE damage you are limited to using Flame of Life once every minute. Do not hesitate to cast Rite of the Forge (big shield) on the tank so that you can ignore the tank for a while and spend a few GCD’s on healing and shielding the party.

In a dungeon your best friends are pre-shielding combined with a quick cleasning on AoE mechanics!

Pay attention to the entire raid, only healing the tank is for slackers. Shield low health players to prevent their death. Remember that you can shield a total of 6 players! This is essential and will synergize with other healers. Because that player is shielded he will no longer take the regular damage. Hence he will be healed back quicker from AoE healing then the rest of the raid.

If AoE healing is struggling then do not fear to time your Flame of Life to use it’s 11K heal ticks combine with the 20% damage reduction.

That said: Keep Latent Blaze up on both tanks (Pre charge!). If you are struggling with splitting your attention between the health bars and the fight then also cast one on yourself.

Make sure both tanks (and preferably yourself*) are shielded with Symbol of the Sun. After that cast Ward of Flame on the tank that has agro. Identify this player by watching the raid flames for the tank with a red square around him. Re-cast shields if needed after each channel.

If things go south use your Rite of the Forge to prevent a death. On a scenario where you notice the incoming damage is greater than the healing, but not yet critical, use the Spiritual Conflagration cooldown to turn the tides (highest hps). If Rite of Forge and Spiritual Conflageration are on cooldown resort to Flame of Life for the 60K+ heal and the -20% damage reduction.

* If you do not shield yourself you are dependent on other healers. This could mean you have to abort a channel and heal yourself at a bad time. By shielding yourself when you have the time you are helping the raid by not dying and not requiring attention from other healers.

Yasutora: helping me test Latent blaze for one hour!
forbiddenlake and Bctrainer: pointing out I linked the wrong spec