Magma Lord Kaliban is the first boss in the Grim Awakening 10 player raid. This is an introduction to Tier 2 Rift raiding meaning that Guilds still struggling in Tier 1 can actually attempt this. Obviously you do want to bring your best members. If you understand the tactics than this boss is pretty easy.

Once you have a player that can properly place the boulders it is basically a tank and spank fight. However, you will  need to learn to recognize the Glare, Soul shatter and Searing flames.

Tank Magma Lord Kaliban somewhere in the centre of the map. Keep in mind that the edges of the map kill you (!). The raid should stack closely together at +- 20 meter from Kaliban.

Now here comes the tricky part; Magma Lord Kaliban will hurl boulders at the furthest player. These boulders are actually key to survival and should be placed with thought. Therefore one player does NOT stack on the group but make sure the boulder lands somewhere on the side. At 20 seconds in the video you will see the player getting ready. As soon as the red AoE is visible the boulder placing player flees. A boulder has now spawned on the red AoE.

After the boulder has been placed a random player will get the emote “Magmalord Kaliban Covers %playername% in Unstable Energy. This player will have to run around the boulder and line-of-sight the raid. As demonstrated in the video, you actually do not move BEHIND the boulder, but you run around to the other SIDE of the boulder. You can return to the raid when the Soul Shatter debuff has dropped. The timer is 12 seconds so you can also delay getting behind the boulder.

Magma Lord Kaliban will occasionally glare at a player. This player (me in the video) will have to move BEHIND the boulder to line of sight the boss. This way the boss will run into the boulder and stun himself. This is the time for the rest of the group to use all cooldowns (Flaring Power, Orchestra etc).

The important final mechanic is Kaliban emoting “Magma Lord Kaliban surrounds %player% in flames”.  This player will get a ground fire AoE around him. Move outside of the raid. Make sure one player with Swirling Flames does not overlap with another!

Make sure someone interrupts this cast ( =tank  ). If you fail to do this you will hurt the raid for about 12K AND heal the boss for 250K.

If you have any additional questions feel free to post them in the comments. I can write down a proper strategy summary if requested. 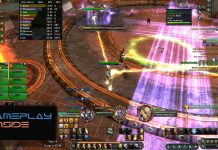 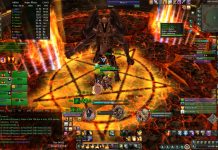 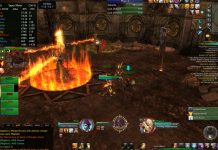