Hi there! GameplayInside has updated to version 1.2 and there are a ton of changes.

There is now a new category called optimize. This category will combine all posts that will enhance your gaming experience. Think guides on saving disk space, checking your frame rate, installing game related software, etc. Basically anything that is good to know for a gamer but not related directly to a game. This also means the old “Hardware” and “Software” categories are removed. 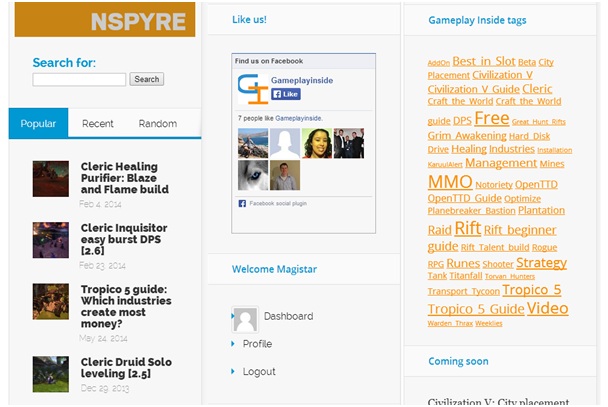 The sidebar has been redesigned to be more user friendly. First of all the search box has increased visibility due top placement, bigger fonts and a blue color.

I noticed no one was using the Tag Cloud functionality. So I have moved the Tag Cloud way down. Also a lot of tags that were only used once have been removed.

A new feature has been added that displays the most popular posts. It can also display the most recent posts and random pages.

The facebook likebox has been increased in size for increased visibility. Let’s see if someone now likes GameplayInside 😉 .

Last but not least; the ability to login has been added to the sidebar. Note that it does NOT work for the social logins (Facebook and Google). You will have to “find” the appropriate login icon for that. They are located above each comment and present on the register page. 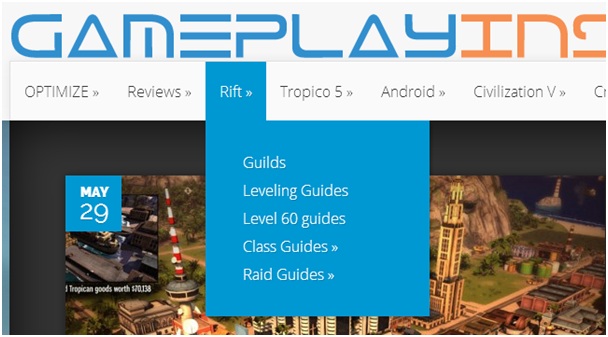 The Rift menu has received a complete overhaul. The endgame parten group has been removed for added simplicity. All categories can now be directly access from the menu. Furthermore they are sorted on increased complexity.

Breadcrumbs have been completely replaced and redesigned. They now provide easy navigation for all categories relating to the article.

As an added bonus the breadcrumbs now also properly support Google. Instead of showing the complete URL Google will now recognize the appropriate category:

GameplayInside is now easier to navigate and faster to load. I hope everyone enjoys the new changes!