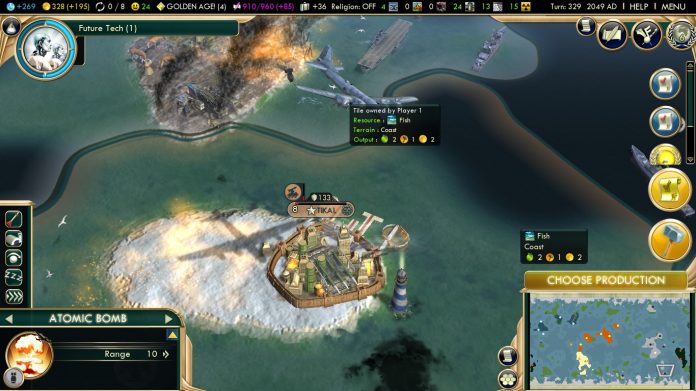 Like the previous games, Civilization V allows you to trade with the AI.

Unfortunately everyone that has played Civilization V will have encountered some strange trading requests by the AI. This can actually discourage trading. However there are decent trades to be made! This guide will provide you with some tips to get the most out of trading in Civilization V.

When you first meet a nation they will ask you (at least most of the time depending upon your reputation) to trade embassies in each other’s city do not do this. Instead place an embassy in their capital and close the trade. Later the same npc will again offer a trade: they will give one gold per turn in exchange for them placing an embassy in your capital. This will do two things one it will give a minor profit from your fellow faction, and two it will establish another trade that will help two nations grow closer early in game. 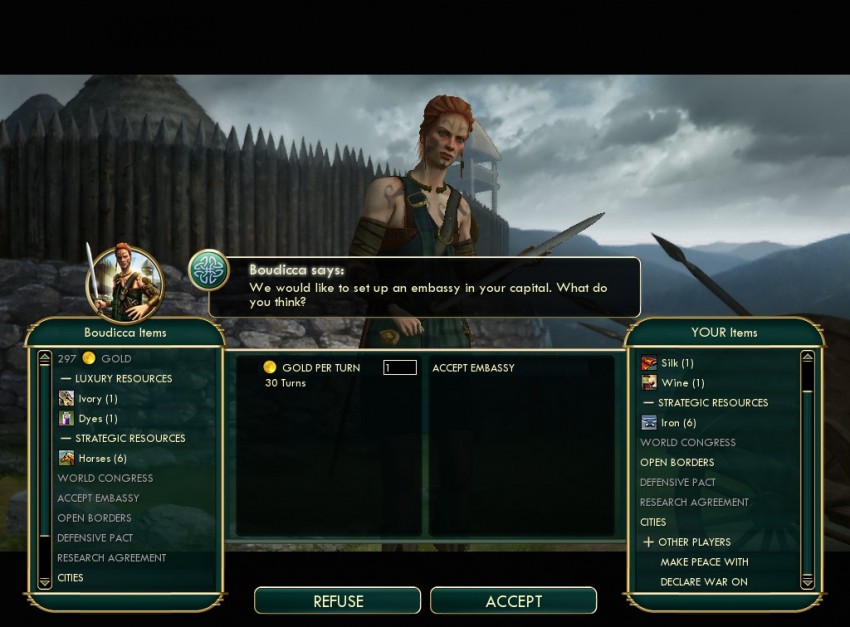 The Picture above is a deal brought to me by the celts.

One of the most useless resources (in my opinion) is the horses especially in late game where they have no militaristic value. Though they do still have some value, nations that are hostile toward you will more then likely denounce you or worse declare war on you. Though it is possible to prevent this if not postpone it for several turns by simply giving horses away. By doing this it will increase the likely hood of future trades going in your favor by giving them a reason to not go to war with you (this will also work with any other resource)

Every once in a while npc who you are in good standing with will offer a trade of open border policy’s this is an attempt to increase relations with your nation, and politically the best decision. Also this is a sign that you can ask for a defense pact with that nation if you desire (this will not work if you are at war with one or more nation)

Though negotiations may seem helpless when presented with demands for all your resources this is just a sign that your nations are not close enough to make major trades. The best way to get better deals in major trades is to establish minor trades with that nation. (i.e caravans and cargo ships)

The United Nations or world congress (depending on your current era) can be useful when making friends in the Civilization 5 community every time they convene there are two proposals on the table each one of these is picked by the current leader and another Civilization. Simply put when a player votes for yea for another nations resolution the nation that proposed it will like player more. This is most often the easiest way to go about making friends. (Obviously making friends = better Trades not that it needs to be said but I’m making sure)

By starting this section I am first going to explain the Atomic Bomb and the nuclear missile their differences and how they work.

It has a blast radius of two, completely destroying friend and foe leaving nuclear fallout which renders the land useless until  scrubbed clean by a worker. It can attack anything within ten tiles of where it is based and can also be stored on aircraft carriers.

Much like the Atomic bomb, it destroys everything within two tiles of its destination leaving fallout behind as a after effect. Unlike the atomic bomb, it has a radius of twelve and can be stored on nuclear submarines and Missile carrier. More importantly it can completely obliterate cities with a population 3 or less. Doing this is a lot similar to raising a city without the unhappiness or actually having to “take the city.” (You cannot destroy capital cities)

Most people know that when they are in a war and your enemy has few soldiers (or none) you will be able to get better deals with said nation in exchange for peace… so theoretically if one were to amass an army of around 5 or more ground units they can use nuclear weapons to destroy most if not all of your enemy’s units. The player can then offer the computer peace in exchange for most if not all of their resources and gold. This will give the player ten turns of mandatory peace with said A.I. and if timed correctly the player can move from faction to faction taking their resources. This can be amplified if all cities except the enemy capital is taken or destroyed.

I will edit this in the future to include tips on: united nations, piracy and peace, going to war with npc, and the profit in nuclear weapons. These topics have not been added because they have not gone through proper testing to be considered Legitimate “tips” Thank you for taking the time to read thi, Also i will try and get screanshots for some of the points mentioned above i had not thought of getting pictures while running the trials.Also please note that this tips will not stop in some cases a npc from offering a unfair deal the best thing to do is to haggle with them, as long as you are at a “friendly” status they should be willing to accept a fair deal. (won’t work if it’s there last luxury resource of one kind)

Please post your thoughts and questions in the comments i will answer all questions presented to me to the best of my ability.