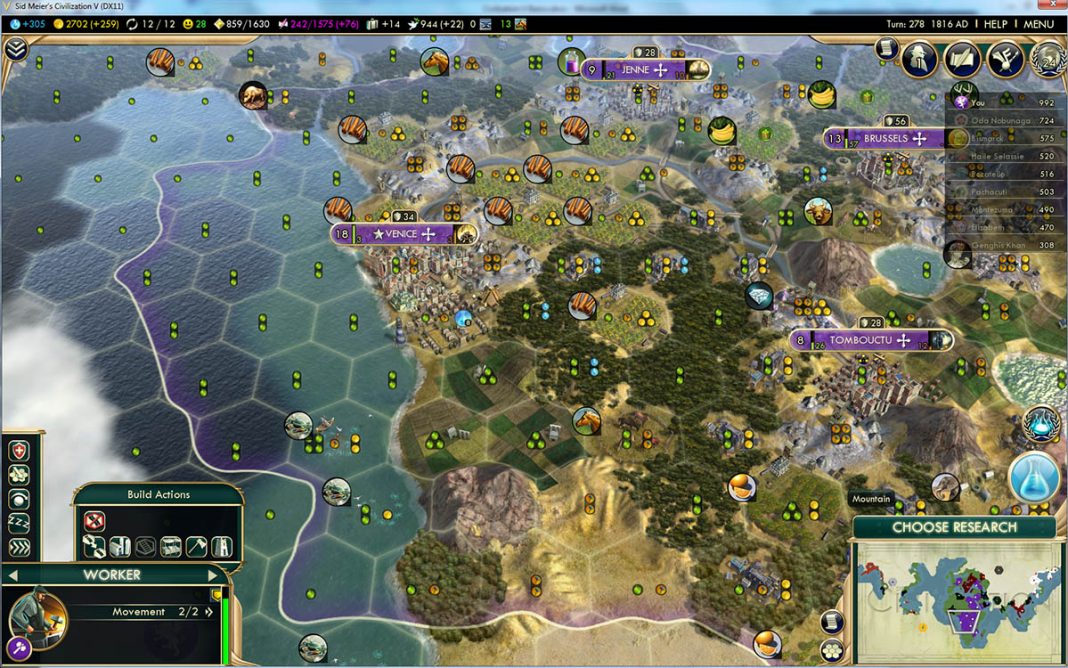 The information in this guide, The basics,  is aimed at new players and can be used in Sid Meier’s Civilization V including the Gods and Kings DLC and the Brave New World DLC. Since each DLC add additional strategic mechanics it is recommended for new players to wait with playing Brave New World.

First we have to understand the basic resources used in Civilization V.

Food controls City growth. From the total food income of a city a portion is subtracted for being eaten by its citizens. The excess food production will result in the city growing. Growing from city size 7 to 8 will require 77 food. Therefore more excess to food means faster growth. When there is a food shortage this growth buffer will decline. When the growth buffer is empty the city will decrease in size.

Gold is not directly used by the city itself. Instead the income of all cities is added to the gold income of your empire. From this income the maintenance cost of your military forces, roads and buildings are deducted. Most buildings cost 1 or more gold per turn. The temple, university and workshop even cost 2 gold per turn. Gold generating buildings such as the market, bank and stock exchange have no gold cost.

Culture serves a dual purpose in Civilization V. On the city level it contributes to border growth. A city will, for example, require 50 culture for it to expand its borders. On an empire level your culture will contribute to unlocking social policies. This is a talent tree system that provides you with bonusses.

When a city is constructed you will notice colored borders around it. This is your territory. The city can use this territory to provide it with the resources it needs;  food, production and gold. 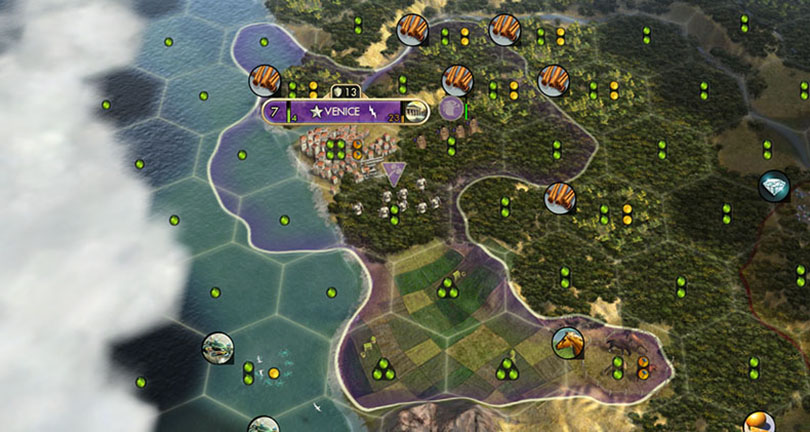 When your borders grow, more options become available to your city . Border growth  usually crawls toward useful tiles. In this example the borders expanded to the Horses. The maximum range of a city will always be 3 rows of surrounding tiles, resulting in a total of 36 “hexes” available.

Now these tiles or “hexes” only provide income to the city when “worked”. For each inhabitant in a city one tile can be worked.  If you city has only 3 inhabitants it will only use 3 of all available tiles. If it has 10 it can work up to 10 surrounding tiles. 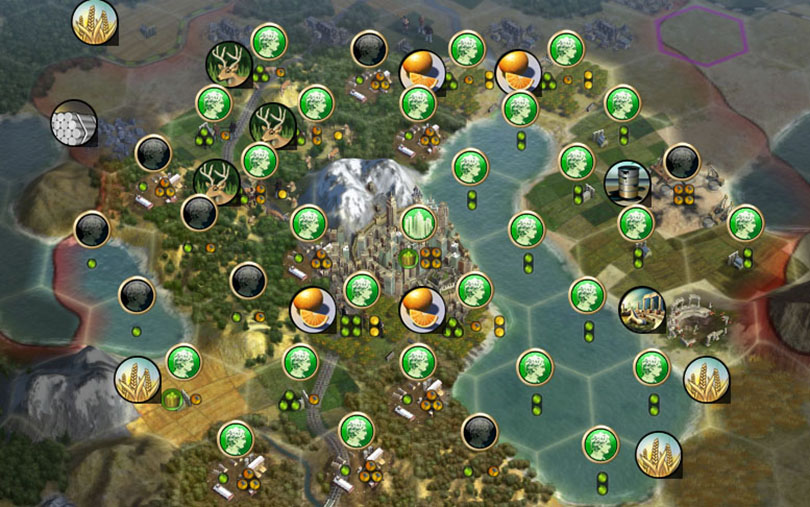 The green icon represents a tile being worked. Grey icons can be worked but currently are not.

By default the City AI of all founded cities tries to make a balanced choice (labeled “Default Focus”) between Growth, Production and Gold. A conquered city that was not annexed but puppeted (=no control over what it builds, but it is part of your empire) will always have a gold focus.

It is possible to manually select a different focus such as Growth or Production. 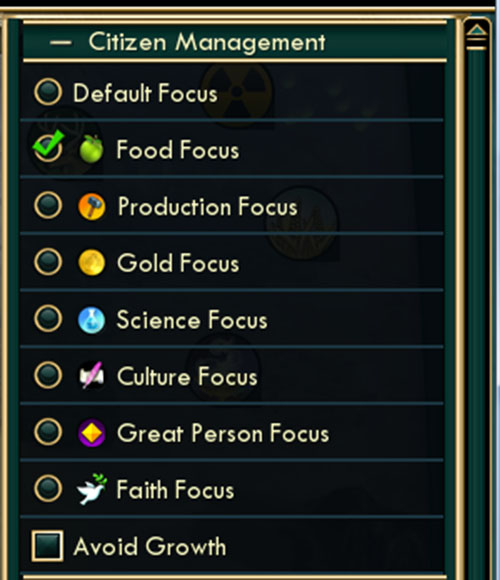 Remember that city earlier? This is the same city set to production focus: 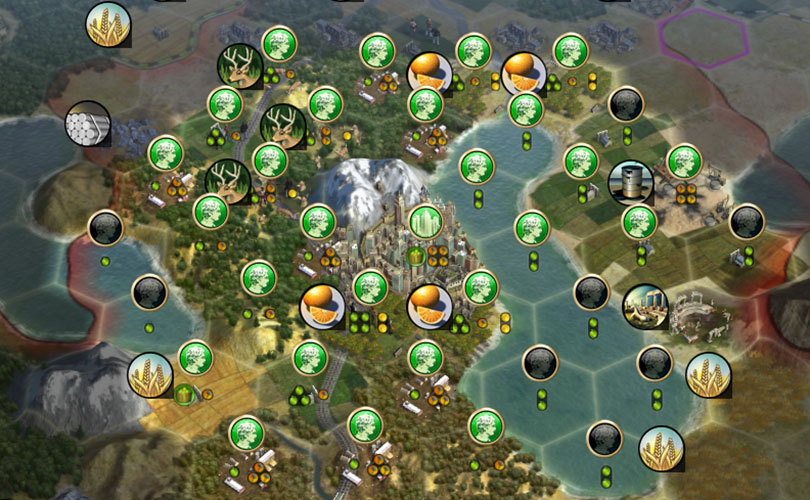 If you look closely you will notice that the city swapped to using more forest tiles.  This change significantly impact the city income: 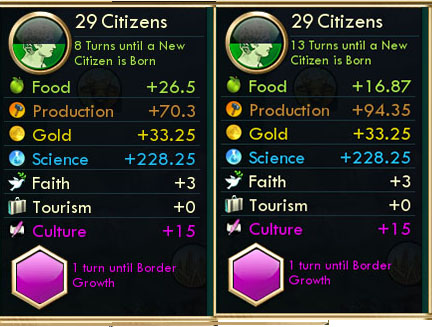 Food decreased resulting in a projected growth drop from 8 to 13 turns. At the same time the production increased from 70.3 to 94.35.

The core of Civilization has always been city placement. Some terrain types provide food whereas others provide production, gold or even a combination. It is the terrain that determines if a city can quickly grow and produce things.

The payoff of each individual tile depends on the terrain type. There are quite a few, I will list the most common ones:

Bad terrain types with no rewards

Instead of trying to remember all these terrain type it is much easier to setup your game to display the income of each tile.

After you have enabled these options your game will look like this:

With this option enabled we can quickly spot the tundra with farm improvement providing +3 food. The Crabs in the ocean provide +4 food, +1 production and +2 gold. A farm near the river provides +4 food and a Cow pasture +3 food and +3 production.  Enabling this option before you settle a new city will allow you to easily judge the environment.

How does this answer the original question?

Summarizing everything we can conclude that new cities have low growth and production because they do not have enough inhabitants.

Increasing inhabitants is achieved by creating an excess of food.  You can temporarily boost the food income by selecting the Food focus from the Citizen Management screen.

Now that you know all about how to control the production and growth capabilities of cities you should realize that each city requires a mix of food and production in order to be useful. A quickly growing city without any production will literally take ages to construct even the most basic buildings. On the other hand a mountain side city without enough good will never reach its full potential.

Obviously there is room for strategizing! You could create production rich cities to construct your armies.  And what about a huge food city just to boost your science income? In games such as Civilization the optimal ways are always debatable. In the end it is up to you, just make an informed choice!