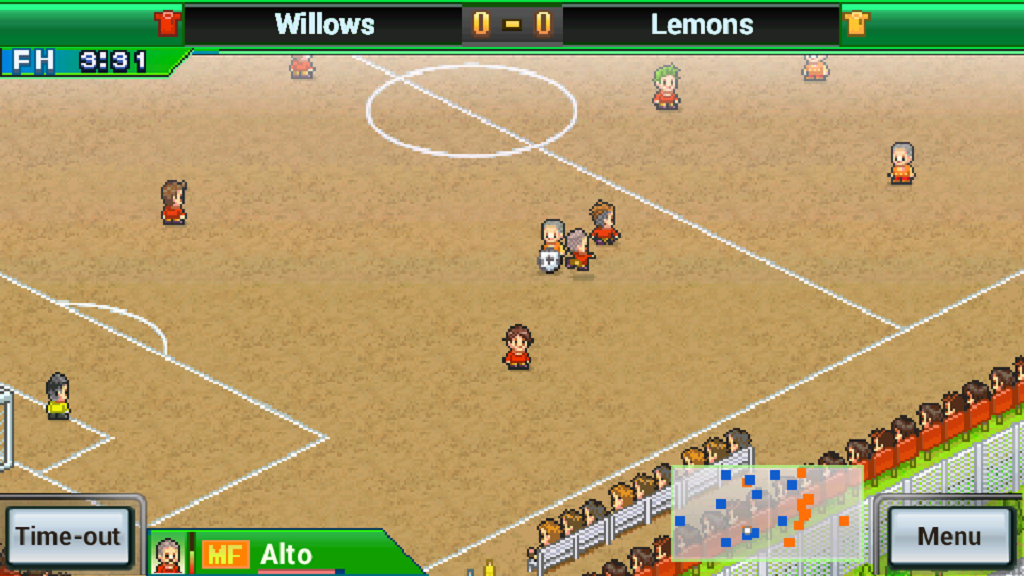 The game features the ablity to play against your friends and hire each other’s star player. Although the soccer matches are shown visually this really is a strategic  management game, and not a time management game. The game does not properly explain all mechanics. GameplayInside is here to help you out!

The game can be installed for free on Google Play.

After entering your nickname and selecting a save slot we have to start a new soccer team. Enter a team name, short name and select the Uniform Color. 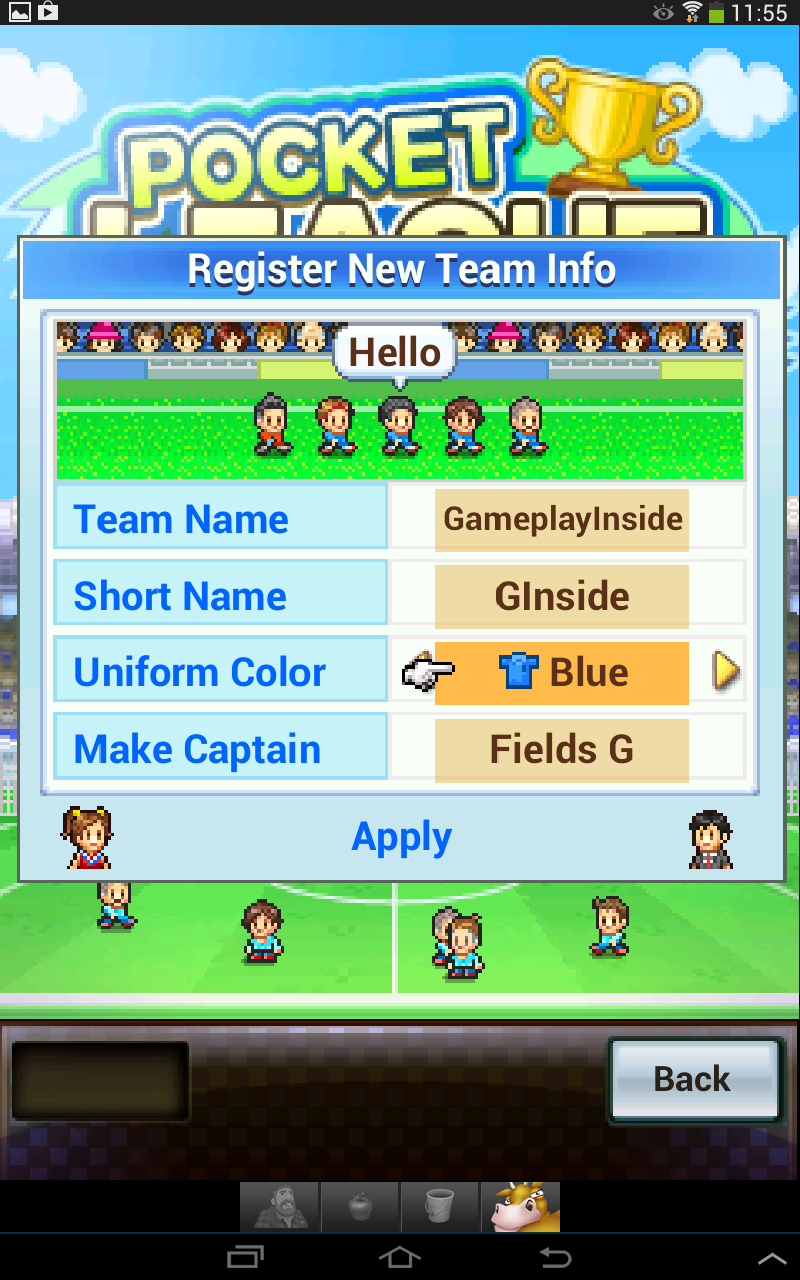 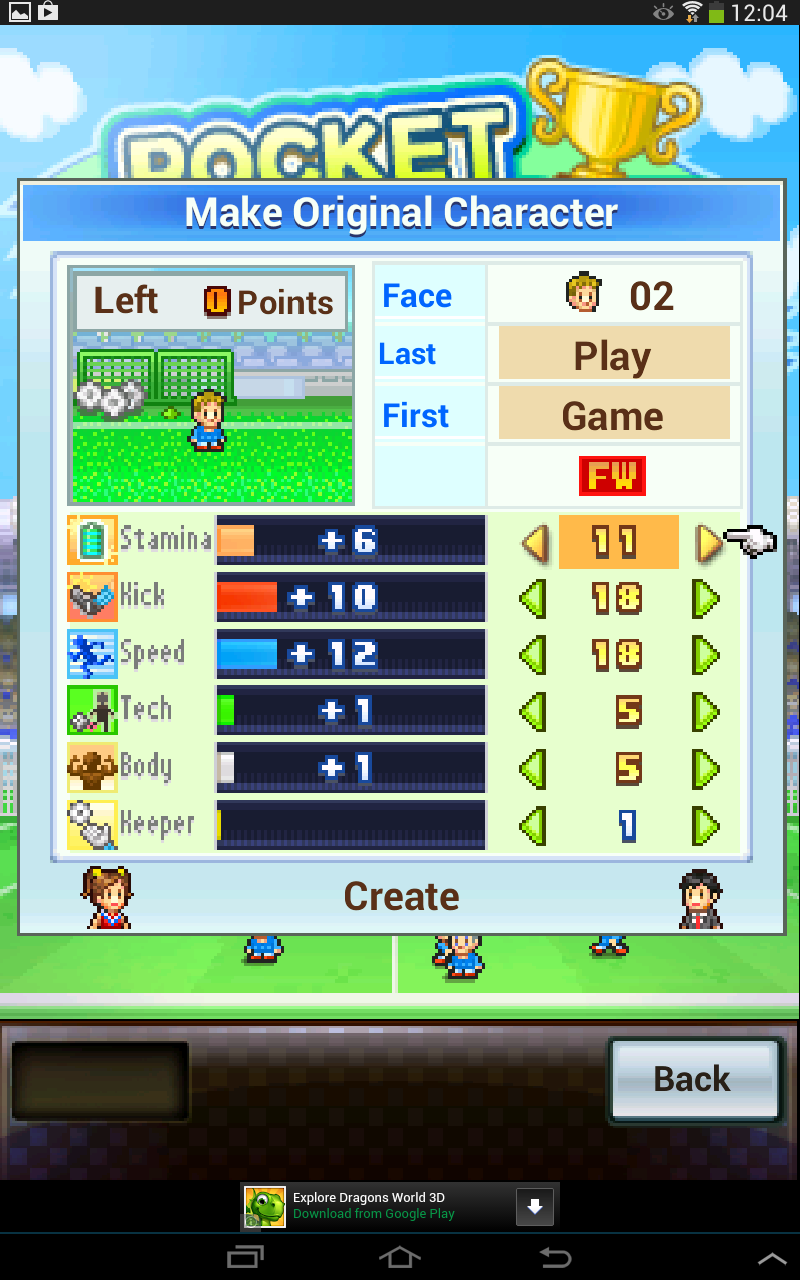 Now let’s create the Captain. This will be your star player. This player will always be of “exceptional” quality. Make sure you select FW. FW is a Forward player whose main task is to score goals. If you want you coul also select MF. MF stands for midfield, they are your first line of defense and preset the ball to the forwards. I do not recommend creating a DF (defender) or GK (goalkeeper) as these players will not result in scoring goals. Spread the 30 talent points according to the preset,  for FW you will want Kick and Speed and not Keeper/Body/Tech. Do not forget Stamina or your player will be tired quickly!


Stats explained
Stamina: How quickly your player becomes tired, if stamina drops to 0 you will have to swap the player or risk injury
Kick: The ability to kick the ball with power (into the goal).
Speed: Ability to outrun other players
Tech: Ability to correctly pass and place the ball to other players
Body: Ability to keep standing when players collide. Also used to “steal” the ball.
Keeper: Ability to goalkeep.

At the start of the game we receive a complete soccer team; a goalkeeper, 4 defenders, 4 midfielders, 2 forwards, and 3 spare players. Unfortunately these players are quite bad. All players have low stats and are listed as average. The only exception it the Captain you created. Average players will be hard to train and will never be as good as Exceptional or Super star players.

Our home base consists of an Office, 7 empty lots and a coach. When you progress you have the option to expand your stadium. The empty lots can hold facilities such as the Parking lot (extra income and hearts), Running track (extra light bulbs) and Gift shop (merchandise income, hearts and light bulbs). When not playing a match your players will visit these facilities and generate rewards for your team. Therefore you never want to fire bad players.

I do not recommend building facilities at the start. These facilities will not provide a good return on investment. However they are transferred to the next game and will be an important source of hearts and light bulbs. 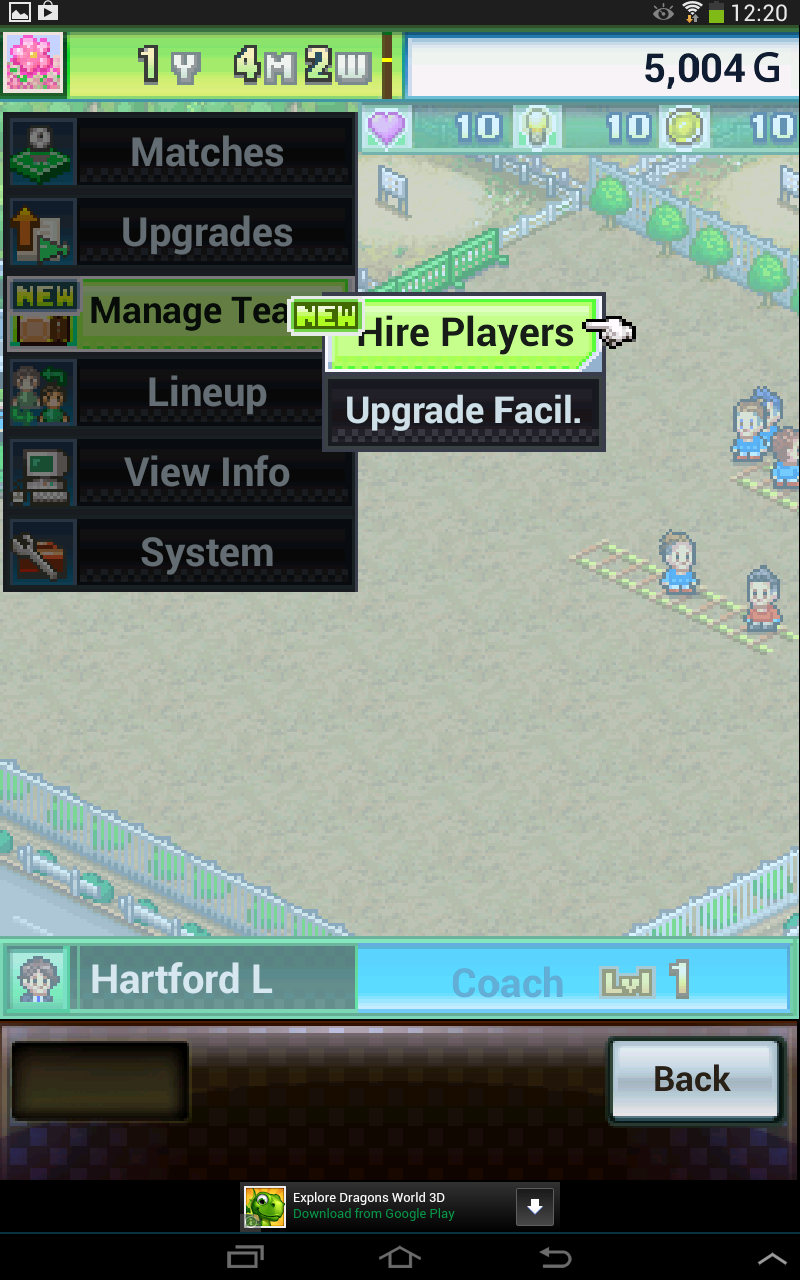 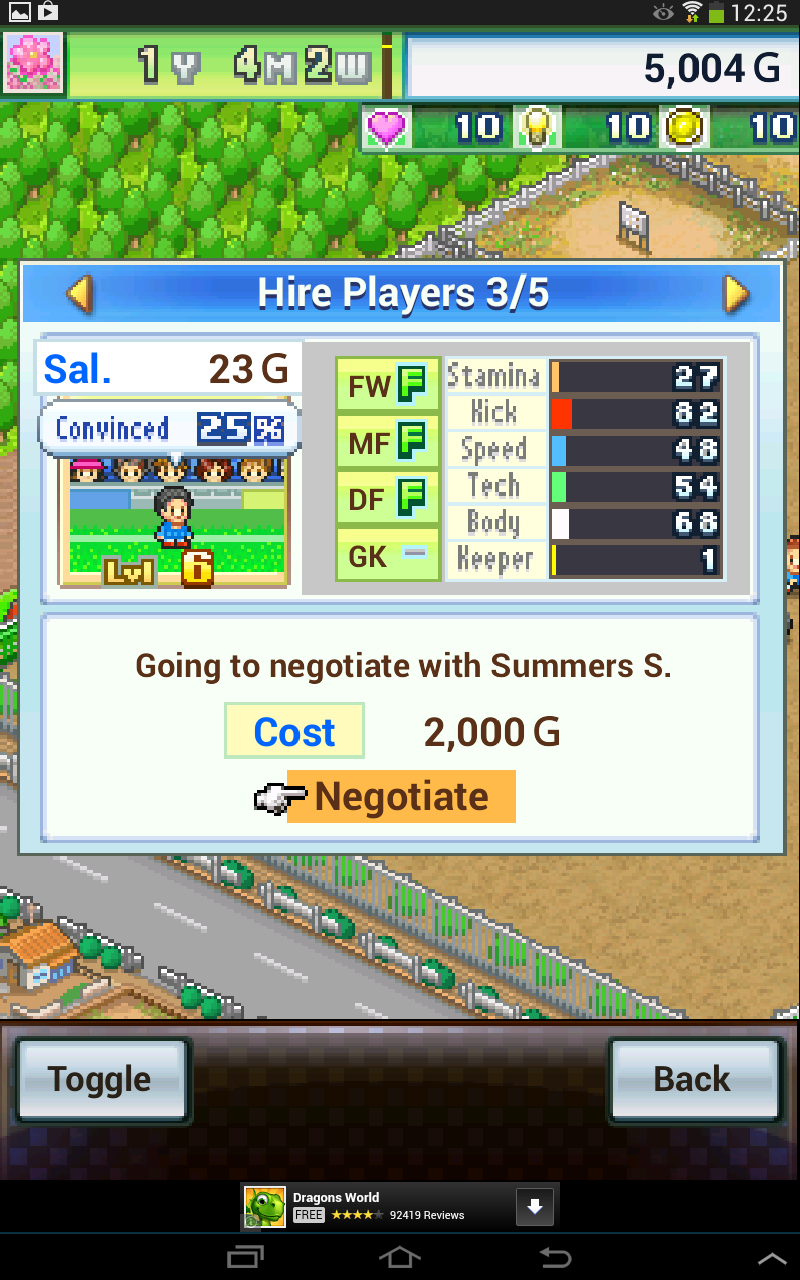 Our first order of business is to hire a new player. This is where you will spend most of your money.  It will take a few seconds for your coach to introduce himself. After this go to Mange team>Hire Players. I recommend hiring another FW or MF. Make sure you never hire Average players.  This process costs money and will most likely fail. In my case the player was 74% convinced which means I have to try again and spend another 2000. Hiring the player will give you some fans and will make the player avaialable for your lineup. 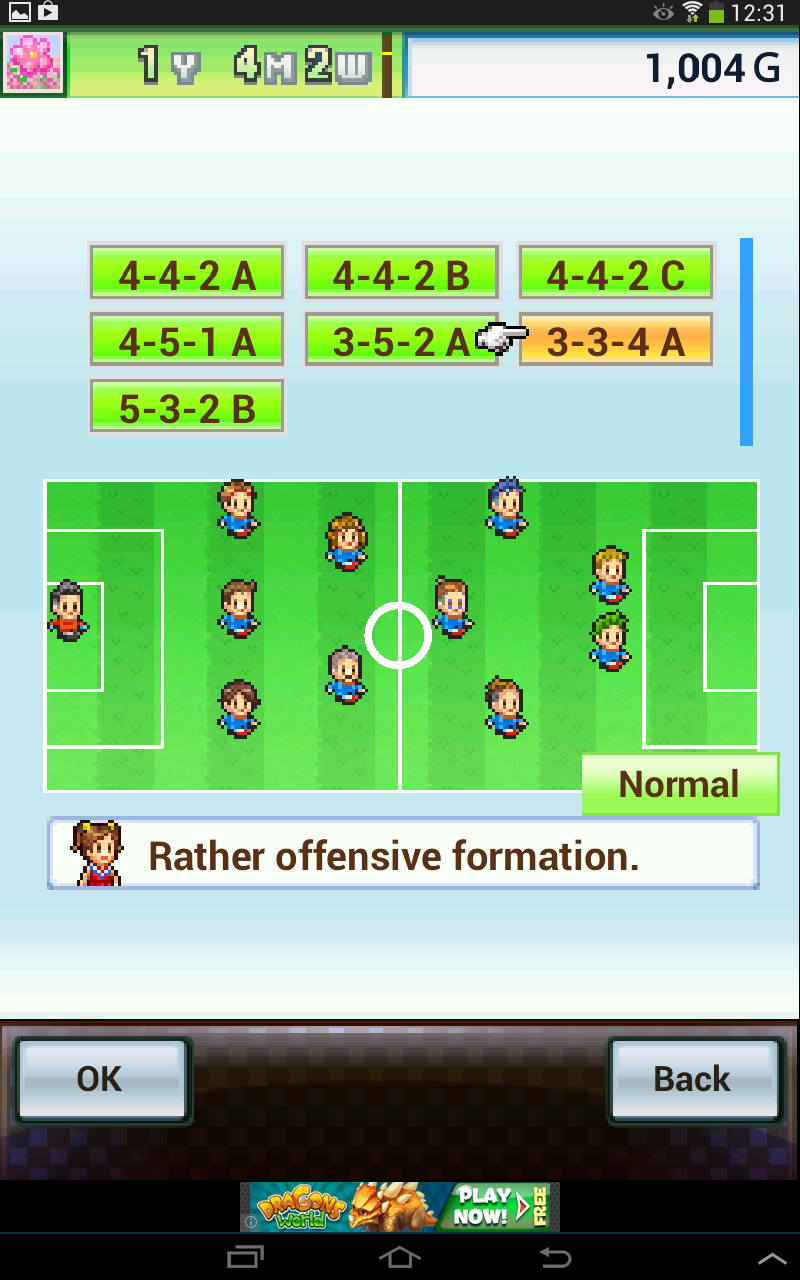 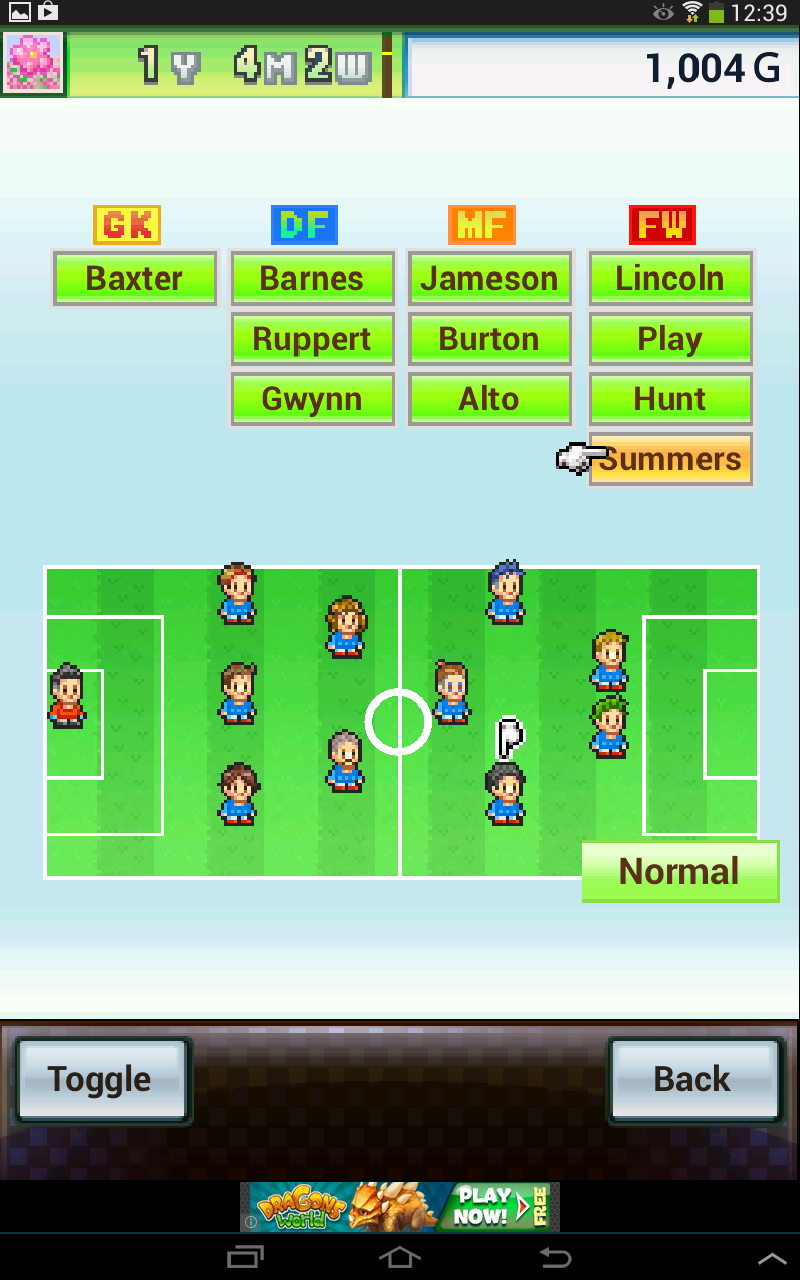 In the lineup menu you can adjust your formation/strategy and your player selection. I recommend changing to 3-3-4 A which will put 4 players in a forward position. You can also select the risk taken; defencive, normal or offensive. Just leave it at normal for now. In the player tab you can make sure the players are on the right spot. Your “captain” should already be in the lineup. So for now just swap one of the original team members for your newly hired player.

Do this by selecting a player (Culler) and pressing Bench. Now select the new player (Summers) and click him twice Further in the game the lineup will be very important. All players are rated on a scale from G (bad) to A (good). Right now all players will have a “G” affinity for their spot. When your players get more experienced they will start to differentiate. For example a forward will get “D” on a forward position but will still show “G” on a defensive position. There will also be players that do worse in rain or better on grass. For now you do not need to worry about this. 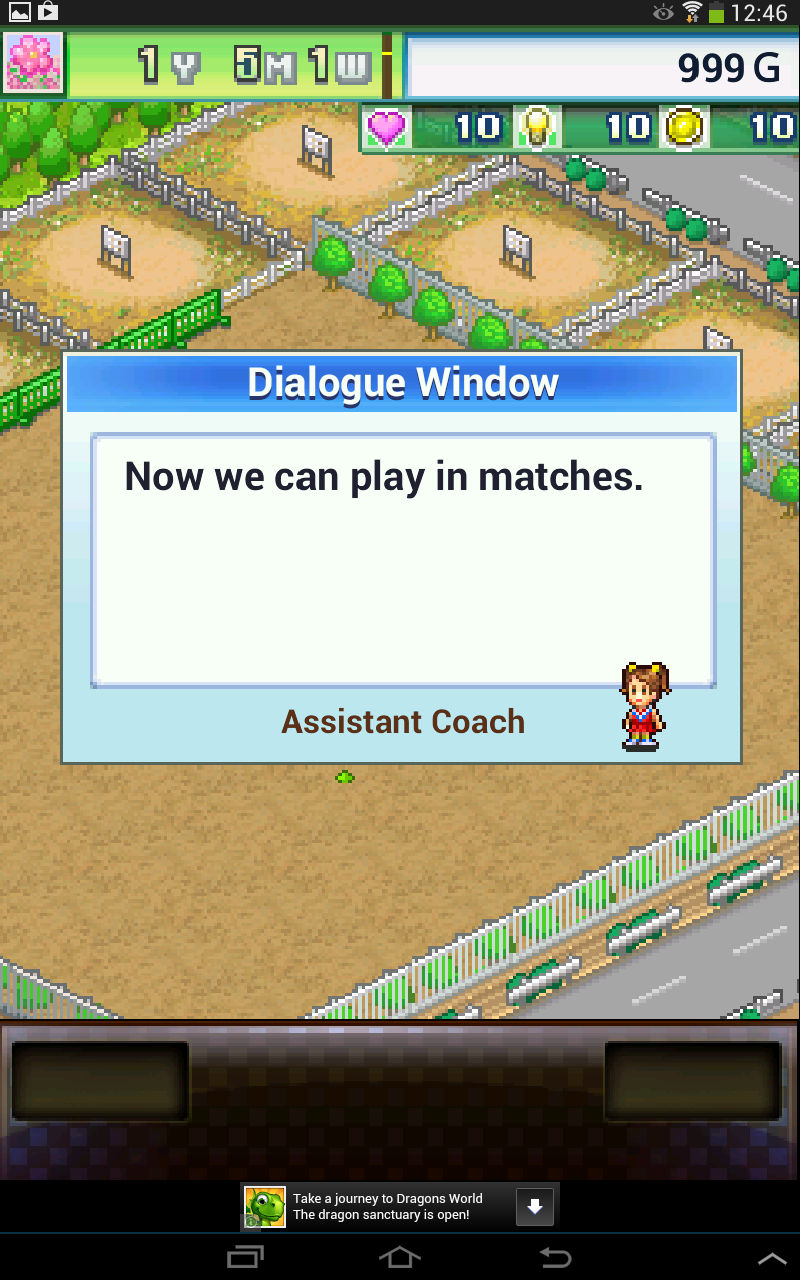 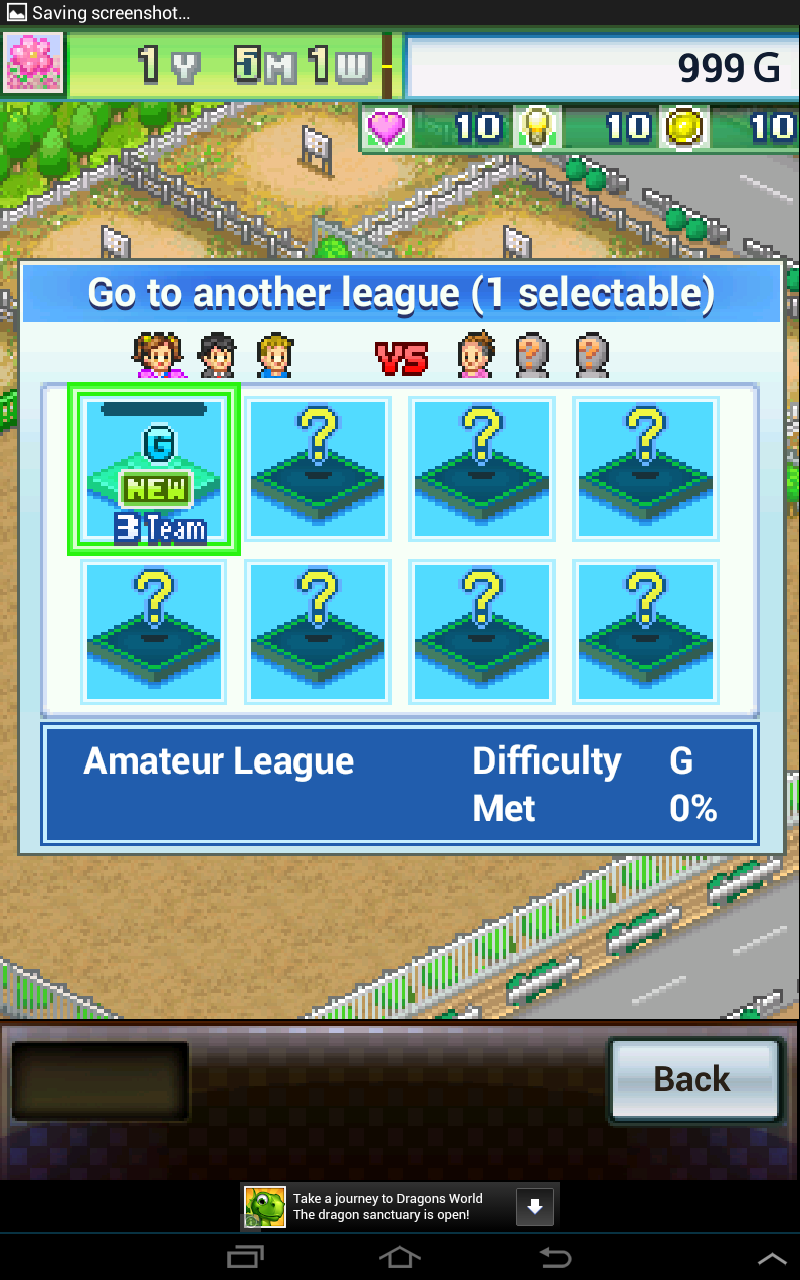 In the next month the game will notify that you can now play in matches.Go to menu>Matches and select the “G” cup.

After 2 weeks the players will board the bus. The team with the most spectators (fans) will get a bonus. The match itself will consist of 2 animated halves that each last 45 seconds.

After the 1st half you have to check if players are tired. If the orange bars are below 50% I recommend changing the player. If you fail to do this the player can get injured and will not be able to play for a few months.

Winning this match will provide prize money, hearts, light bulbs, fans and items. If you won with +4 points against this team you will receive an additional 3000 money. 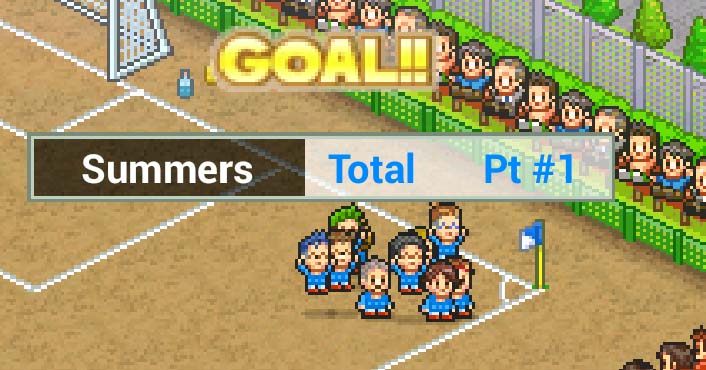 Now that you have gained several types of currency  it is time to make some strategic decisions on how and where to spend them.

Money is used to hire additional players and to build and upgrade facilities . New players will result in a stronger team. High quality players are expensive but can develop into very good players.

Facilities generate additional income of money, hearts and light bulbs. All players, also the ones not in lineup, will use these facilities. Winning a cup will result in a few thousand with each individual match also bringing in at least 1000. For 6550 you can upgrade to a level 3 parking lot, however this will only bring in about 1000/year. Therefore only invest in facilities when you are winning easily. The Gift shop will unlock the sale of merchandise at each match. Do not expect miracles, the sales are limited to a few hundred each match. Nevertheless you want to build this facility when you have 3000. The office decreases the time it takes your players to relax. Increasing its level means you can play more matches per year!

Light bulbs are used to train your players. It is up to  you to choose the focus of this training. A midfielder could use more stamina and technique, whereas a forward will be better off with kick and speed. You will always train 3 players at a time. Exceptional players have a higher stat limit. Therefore I do not recommend training average players. You will waste your research points! Repeatedly using the same training method will increase its level. For example the Kick/Speed training will become “Banana Shots” on level 3 that give Stamina, Kick, Speed, Tech, Body and Keeper!

Hearts are used to unlock sponsoring and ~can be used to purchase additional items. 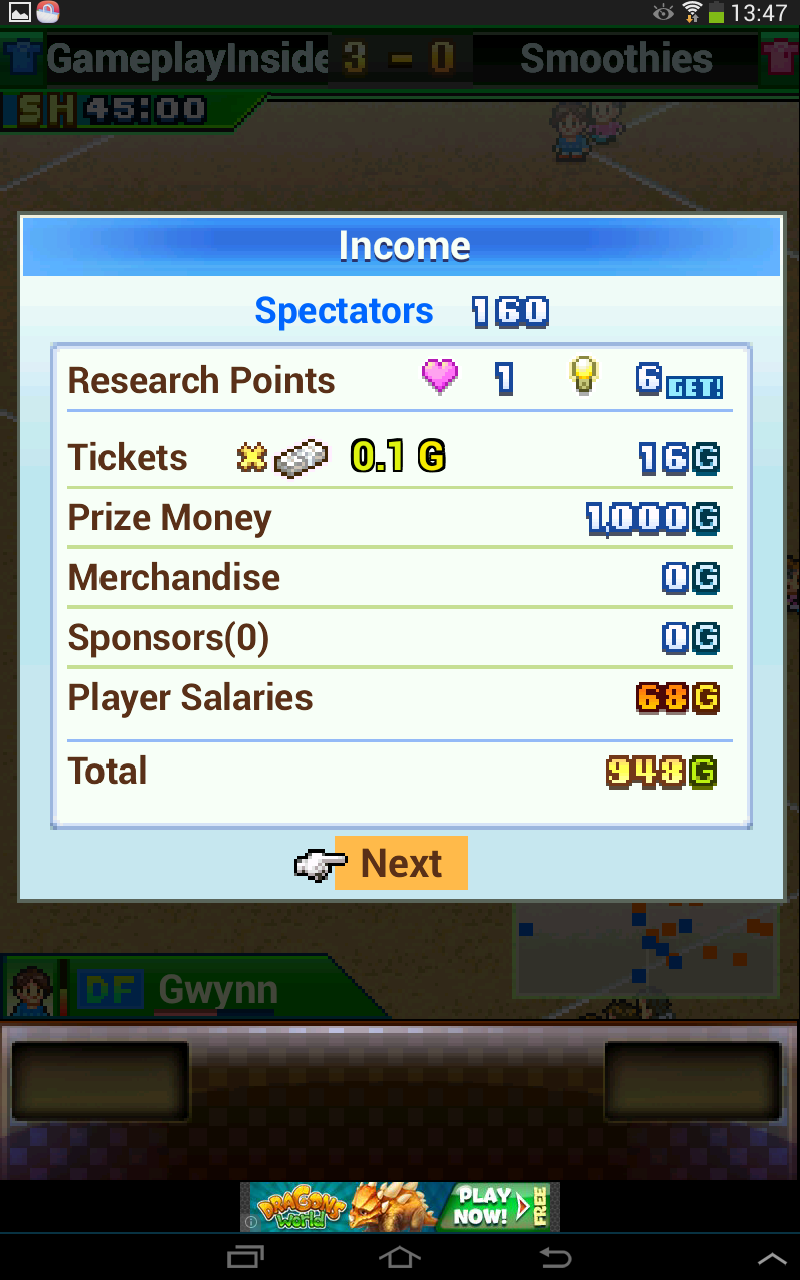 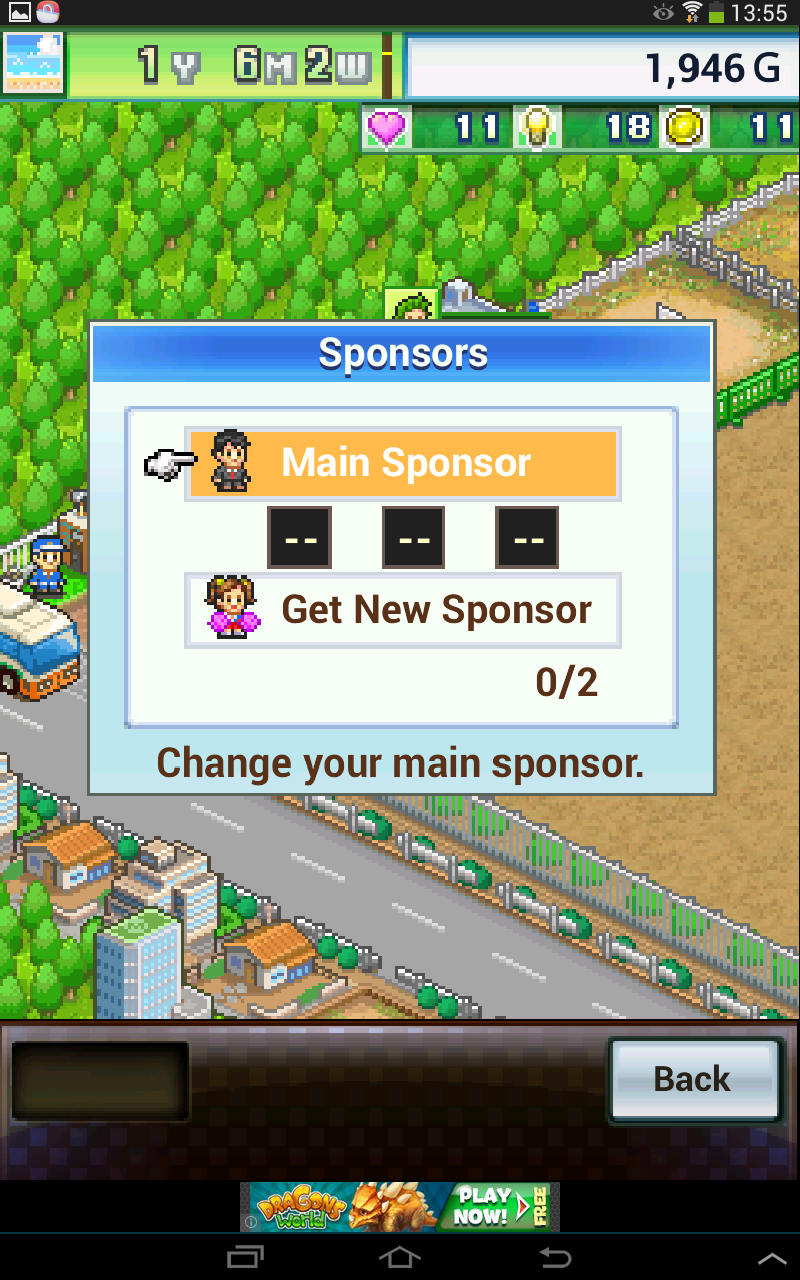 A sponsor will provide you with additional money per match. If you select a sponsor as main sponsor it will be able to increase in level thereby increasing the match bonus. Furthermore main sponsors will provide a bonus such as Discount on training for the “Mall” and additional fans from the “fortune teller”. There is no limit to how many sponsors you can have. You can select up to 3 main sponsors at the same time. Sponsors are hired similarly to players. You spend hearts to start negotiating. If you reach 100% convinced you will receive the new sponsor.

The coach determines how many hearts and light bulbs you will gain each match. At the end of the year you can choose to renew the contract of your coach, or to hire a different coach. Keep in mind that your coach will increase in level. A 2 heart/1 light bulb coach is likely to give 4 hearts /2 light bulbs in a few years. So do not swap too often.

To progress in the game you will need to win matches. Winning matches increases your “eval” and brings in income. The amateur League will provide 3000 prize money, the novice cup 5000, the regional League 7500, King Cup 8000, etc. To do this you will need a better team. The only way to get a good team is  by replacing  all players in your team (except your captain). At the same time you need to spend your light bulbs on the newly hired players. After a while you will have players reaching 300 stats with qualification C 🙂 . 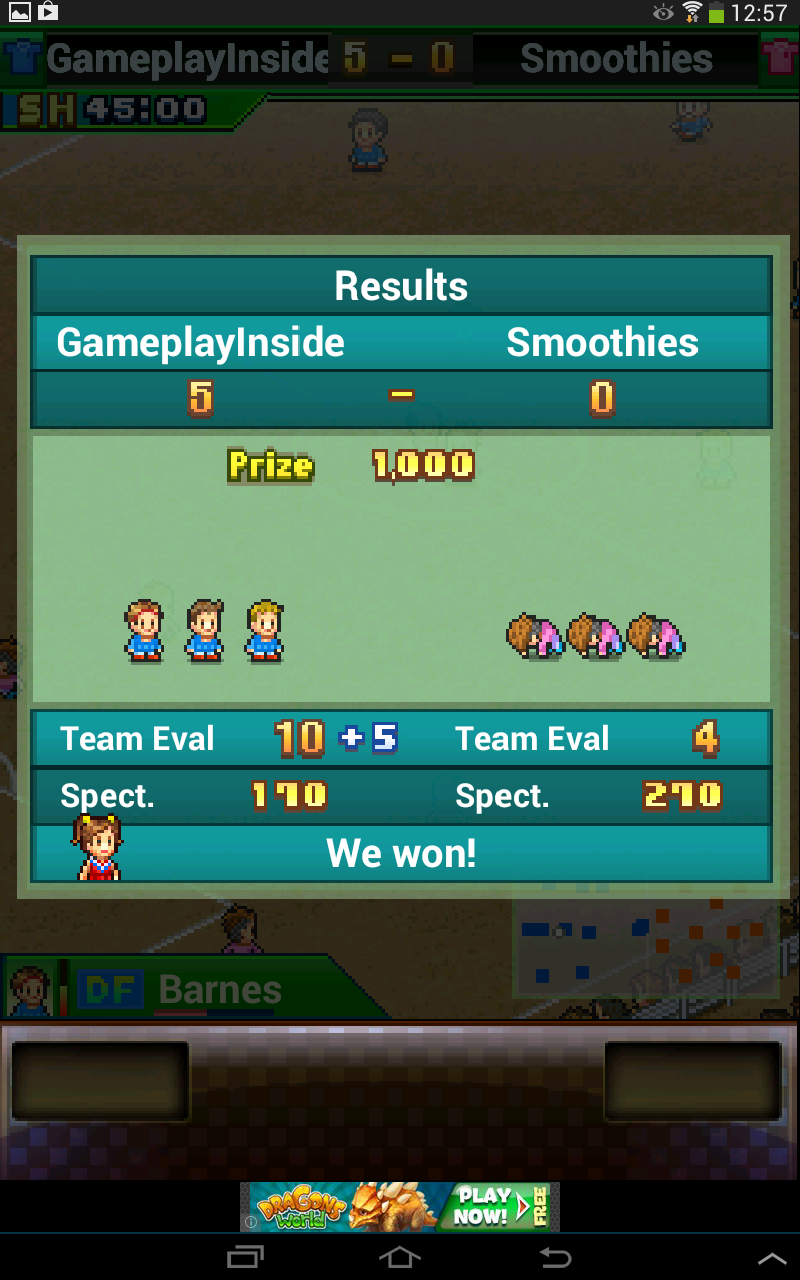 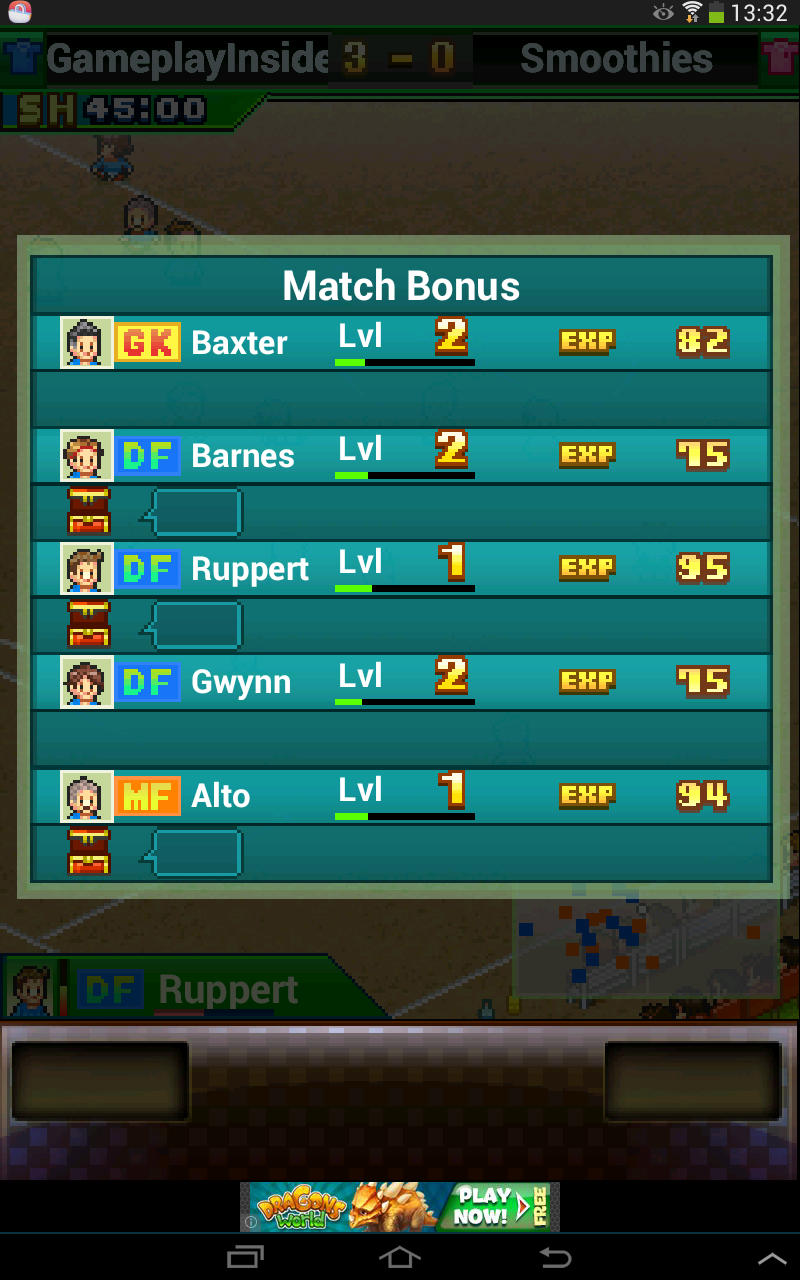 Be careful with replaying matches!

Be careful with replaying matches. If you win with +4 points or better the enemy team will increase in strength. The next time you will play against them they will be much, much better. For example the first team Smoothies now has Eval 24 in my game wheras the 2nd team has 13 and the 3rd team has 24. Thus smoothies are no longer the worst team of the game. You can prevent this by changing your formation to something ridiculous after scoring 2 points. For example the Backwater formation on Defencive with Long Pass will make it (almost) impossible to score.

Restarting the game: you are not supposed to win

Like all Kairosoft games you are not supposed to win in your first play through. At the end of year 8? you can choose to start a new game. However in this new game you will keep all your players and facilities! Thus providing you with a huge advantage in your next game.

If you add a friend you can hire each others star player. This is a good way to get another exceptional player early game. When your team reaches level 5 you can also participate in matches against other players. However this will take you a few years!