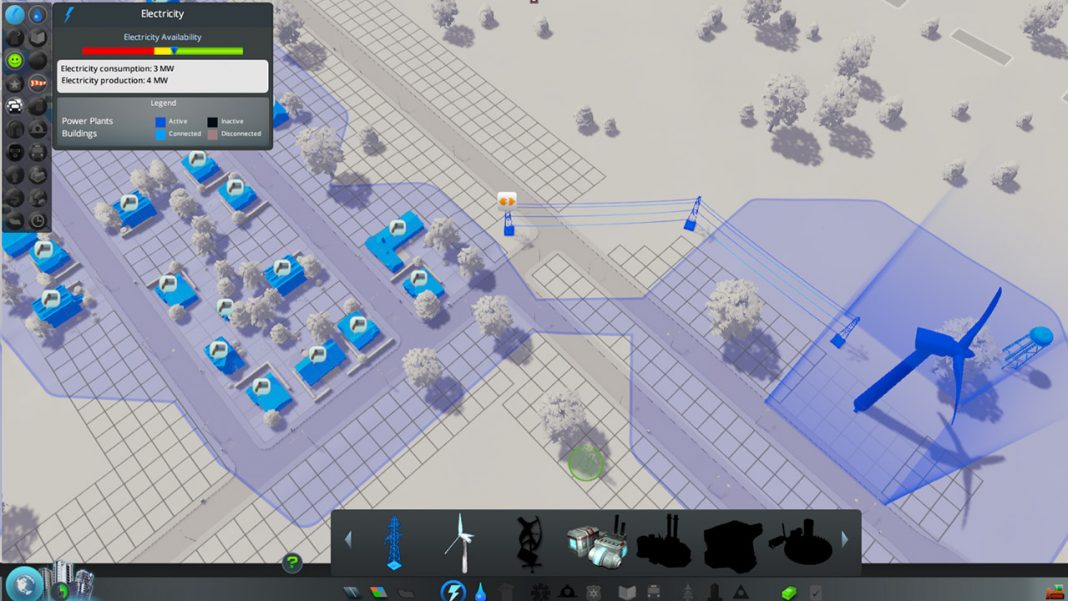 Cities Skylines offers different methods to produce electricity. At the start of the game you will only have access to the Wind Turbine and Coal Power Plant. The further you progress the more you unlock! You can construct water based  Wind Turbine’s, Oil power plants, Solar Power plants and even nuclear power plants.  How does it work and which should you choose?

First let’s do a quick recap of the Power lines before I will attempt to calculate the “best” power plant!

Power lines can be a bit confusing at first. Basically all buildings emit a blue power zone. Buildings close to each other will create a single zone. Power lines will need to be constructed to connect different zones together. Let’s take a look:

Cities Skylines offers plenty of diversity in terms of construction cost and upkeep.

But what about efficiency? In the end efficiency is about the upkeep cost ratio. Let’s take a look

Coal Power plants burn actual coal in order to function. When constructed they will come with 9 weeks worth of coal.

When their coal reserves drop they will order in coal from “off map”. Meaning that a truck full of coal will have to drive to the coal plant and deliver it’s coal. So it is very important to have a working road connection that is linked to the outside highway. An endgame alternative would be to use a Train Cargo Station to import coal. However by that time you will have access to the superior Solar Power plant.

Before jumping to conclusions you must realize that there are some mechanics in place. First of all Wind Turbines generate MW based on their placement. Secondly they create a lot of noise pollution. Therefore it is probably a bad idea to spam the entire map with Turbines.

But what is the point where Wind Turbines no longer make sense? I did some calculations and came to the following conclusion

The Hydro power plant is a flexible building that can be constructed across any river within your territory. The power output ranges from 0 to 1600 MW depending on the water height difference. It has a fixed upkeep of 3200. Therefore it can be extremely expensive (when it is generating 90 MW) or very cheap. Note that you can actually get an estimate from the in-game tool tip while dragging out this building.

Incineration plant also produce 12 MW of power. However they should not be relied upon as a source of power. Mainly because their €1440 weekly upkeep means each MW will cost you a whopping €120. Therefore it is 16 times more expensive than the Solar Power Plant. In addition it also pollutes the ground.

At the start of the game you have to choose between Wind Turbines and Coal Power plants. Always choose Wind Turbines as long as you can plop them for 6 MW or better. They will cost you a bit more but their low upkeep keep your finances healthy. Eventually you will be forced to use Coal Power because they provide 40 MW (6 Wind Turbines).

If your map supports it then you can start replacing coal power as soon as you unlock the advanced wind turbines at 2600 citizens. Besides saving upkeep this will also lower pollution. Skip the Oil Power and wait until you unlock the Solar Power plant at 20.000 citizens. If you are going to experiment with the Hydro dam then I strongly recommend to save your game!

Got questions or other remarks? Feel free to post in the comments below.