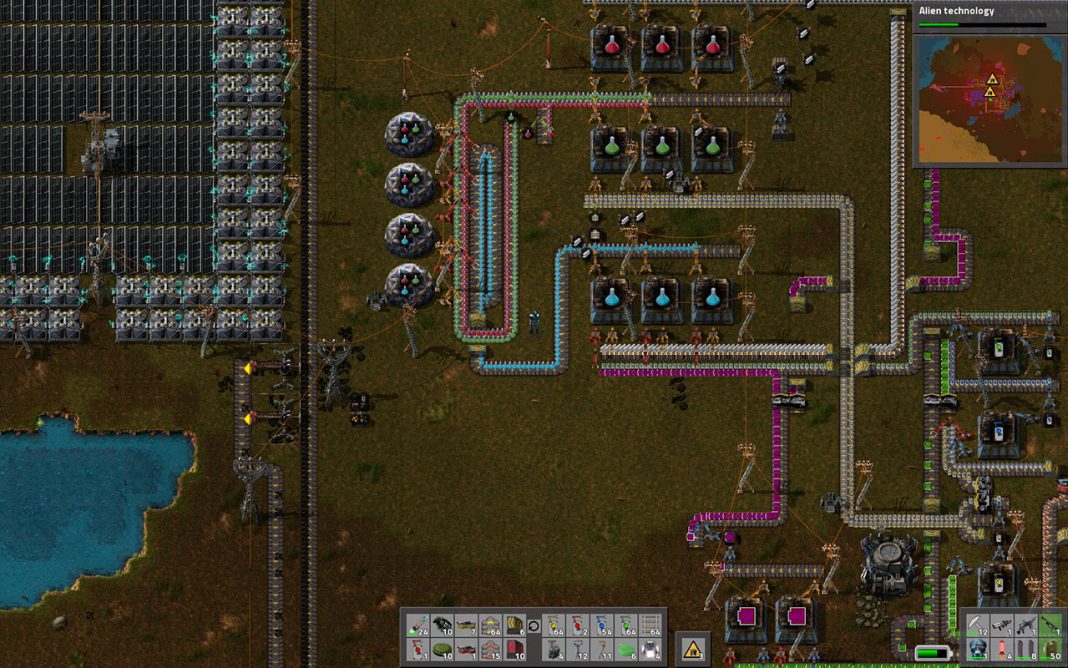 In Factorio I usually create transport belts with all required inputs. Meaning throughout my factory there will be a flow of iron plates, copper plates, gear wheels, transport belt, steel, coal, copper wire, electronics, etc. However because there are so many types you are likely to end up with a maze. Personally I don’t mind it but when playing multiplayer this can make it hard to co-operate!

Before we can start with automating the green science flasks it might be a good idea to check which inputs are required. The flasks itself are created from yellow inserters and transport belts. To summarize:

Unfortunately both of these components have several sub-components. Let’s work on these two components chains separately.

Because all our items are constructed from Iron plates we only need a single main line with iron plates. Now simply build two factories next to the line of Iron plates. Keep a gap of 1 tile between them. 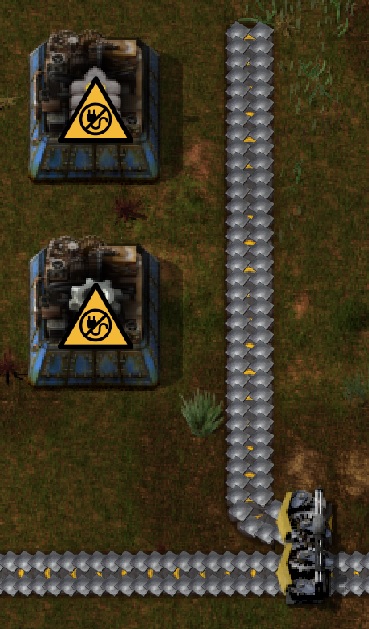 The first factory will construct Gear wheels. In order to do that it will take iron from the main line. However here comes the twist: Instead of outputting the gear wheels to another transport belt you insert them directly into the second factory. 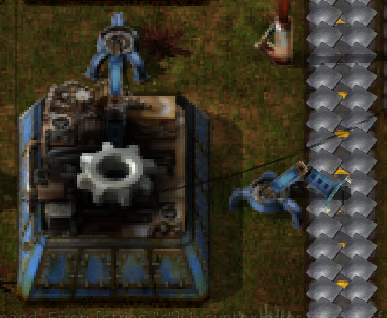 Set the second factory to produce transport belts. Again we will take iron plates from the main line. Gear wheels will be automatically supplied by the first factory. 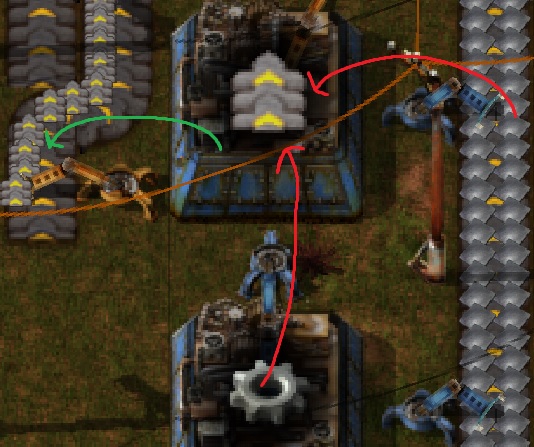 Want to save up a few hundred of transport belts for personal use? If so then I recommend constructing another inserter with a chest. That way some of your output will be stored in this chest. Don’t forget to close some of the storage space or you will end up with 25*50 transport belts! 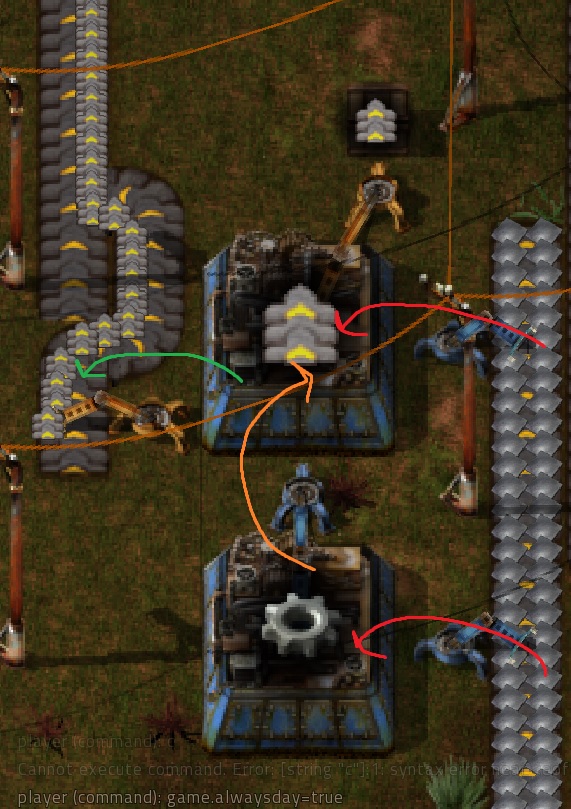 Note: The strange bend at the finished product forces the finished Transport Belt to use the right side of the lane.

The yelllow inserters are a bit more complicated and require three inputs:

A traditional setup would involve two transport belts feeding these components to the factory. In this example we will simply be using multiple factories with little to none transport belts. In order for this plan to work you need to be able to get both iron plates and copper plates onto a single lane.

First we will need a main line that provides both iron plates and copper plates. Construct three factories next to it with a gap of 1 tile.  Construct a fourth factory left of factory two and three. Now provide it with Iron plates.

The first factory will be set to copper wire. Place an inserter so it can take copper plates from the main line. 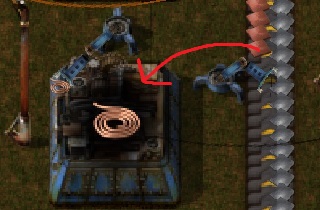 The second factory will take the copper wire from the first factory. Do this by simply connecting them with an inserter. It will also need to take Iron plates from the main line 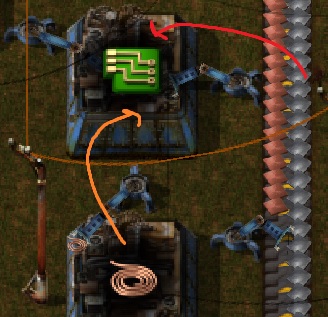 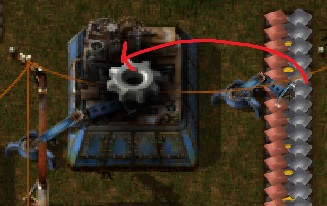 The fourth and final factory will have to b e constructed between the Electronics and Gear wheel factory. Set it to produce Yellow Inserters. Now it will need two inserters to feed the electronics and gear wheels.  It also needs to have access to iron plates. 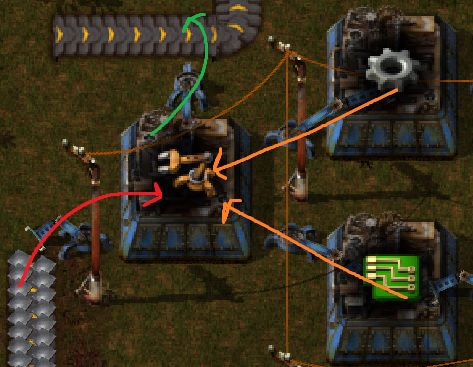 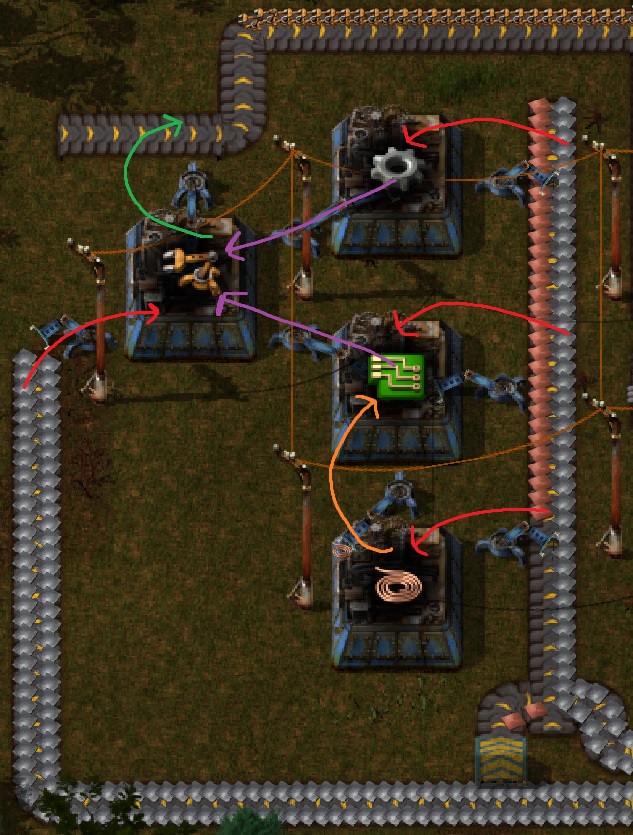 After both blocks have been constructed you can simply feed both the finished transport belts and yellow inserters onto a single line. Don’t forget to make use of the left and right side of the belts by connecting from the sides.

A blue factory will be required to automate the production of green science packs (science pack 2). This layout will support quite a few factories so construct a few. Now set them to produce green science flasks our brand new yellow inserters and transport belts. Don’t forget to place power and a few input and output inserters.

On reddit.com aeide7 suggested I would include some performance evaluation data. So here we go:

There is an easy way to balance the design. The new design produces 96 Yellow Inserters per minute (instead of 60), creating a perfect balance with the 96 Transport belts per minute. This design will need 8 blue assembly plants for creating green flasks. 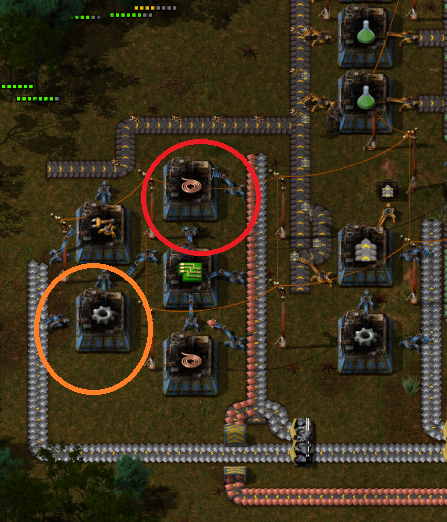 This new design features a new factory (orange) placed directly below the Yellow Inserter plant. Set this factory to produce gear wheels. The required iron is already there.

The old gear wheel factory (red) is switched to produce copper wire. This also means the blue inserter of the new copper wire plant has to be moved from feeding directly into the Yellow Inserter plant to the Electronic Chips plant.

These changes will double the production of Electronic chips and therefore further increase the capacity of your yellow inserter production.

With the last changes we can now support up to 9 assembly plants for green science packs. As I final tip I recommend you  make sure you are using the blue inserters in the factory blocks because the yellow inserts will be too slow to handle this design. The same is true for the blue assembly plants. If you need even more speed then you can always equip them with speed modules or upgrade them to assembly plant type 3. These guys are even faster and can be equipped with 4 modules.

Feel free to request additional information in the comments.