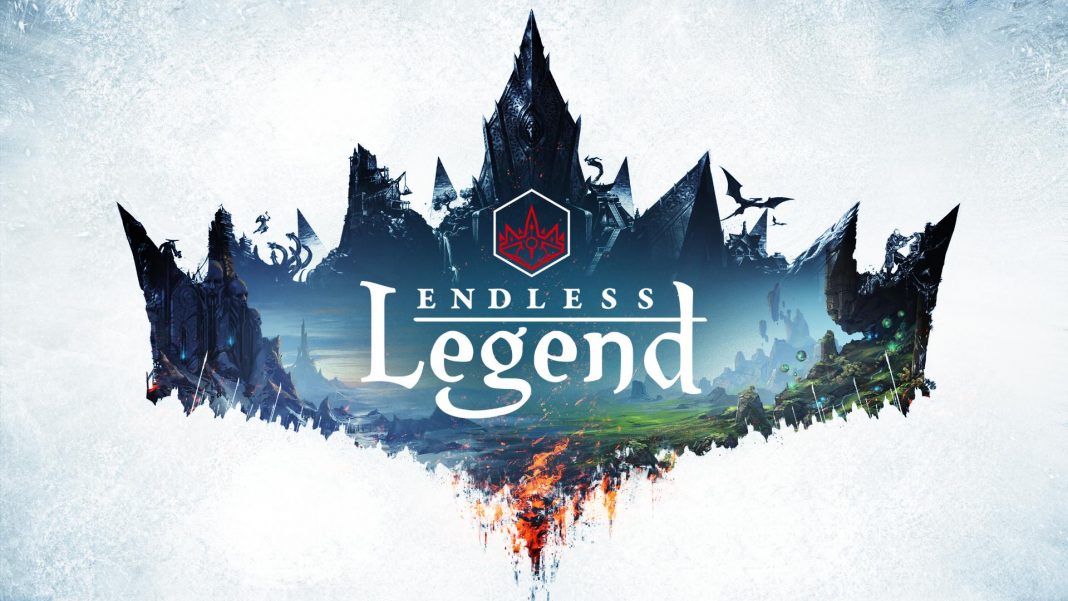 Endless Legend is the latest 4X game from Amplitude Studios. If you love strategy games then Endless Legend is a must have. It really offers complex mechanics allowing you to use strategy to get ahead in the game. In many aspects it is much more flexible than the more popular Civilization series (especially Brave New World). However Endless Legend can be a bit overwhelming. Here is a guide to get you started!

Setting up your first game of Endless Legend

Before you start playing Endless Legends you will have to select which faction you would like to play. For your first game I strongly recommend to stick with the default “Wild Walkers”. They are the most traditional faction. Each faction has a twist in the form of an “affinity”.

Wild Walkers
Very traditional faction. Starts with ranged archer units. Starting techs are Seed storage (food) and Sewer system (approval). Their unique traits are related to forests. You will gain +1 production on forest tiles. Later you can research a 25% defence bonus on forest tiles. Their affinity allows them to detect enemy empires within and around your borders.

If you do not like the look/lore of the Wild Walkers then the Vaulters or Ardent Mages are also newbie friendly. Checkout a complete description of the other Endless Legend factions.

For a new player it is highly recommended to play either on easy or newbie. In Endless Legend the AI actually gets ‘dumber’ if you lower the difficulty below normal. On newbie difficulty it is very unlikely that the AI will declare war on you. This allows you to discover the game at your own pace. On easy war will be declared but often the resulting attacks are kind of weak.

I recommend a normal world size (6 players) with shape Pangea. This basically means the entire map is one continent surrounded by sea. World difficulty should be set to easy to avoid clashing into neighbors at turn 10. 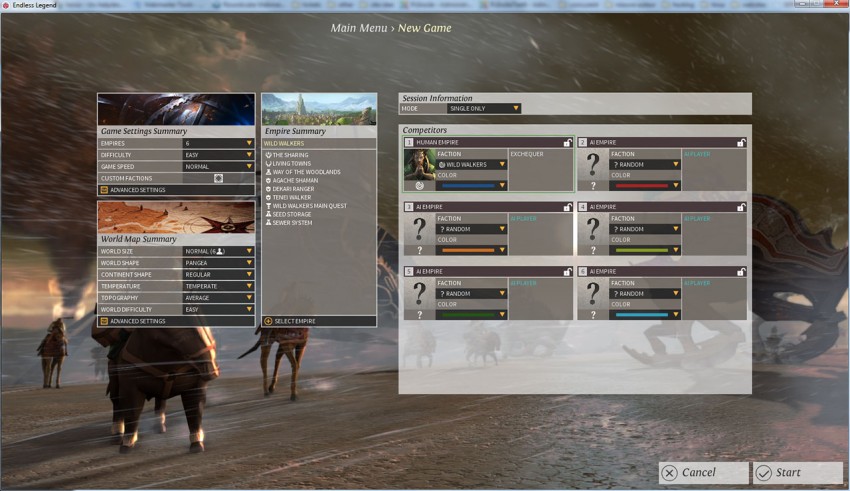 FIDS stands for Food, Industry, Dust, Science and Influence. These are all resources that can be accumulated by your cities by exploiting its neighboring tiles. Similar to Civilization (or The Settlers of Catan) the tile output is determined by the terrain type. A desert will not provide any food whereas a nice green field of grass certainly will.

Let’s take a look at the purpose of these resources.

Used by cities to grow city population. The larger the city the more food required to gain an additional inhabitant.

Used to construct buildings. If a building costs 200 to construct and you earn 20 industry per turn the  construction will take 10 turns.

Dust is a currency similar to gold in many games. You use Dust to pay maintenance cost on your cities and armies. It can also be spend on the market place to purchase heroes , mercenaries, luxury resources, strategic resource and resource stockpiles. Furthermore dust can be used to instantly complete projects from your city production queue.

Science is used to research technologies. The more you have the quicker you unlock new buildings, weapons, armor and advance to new tiers of technology.

Influence is a special resource similar to culture in the Civilization series. Every 20 turns you can spend influence on your empire plan policies (see further in guide). Influence is also required for almost all diplomatic actions. Want to declare war? Spend 144 influence points.

Cities and workers in Endless Legend

Cities will automatically harvest any tiles in their range. Meaning that the city gains the income associated with those tiles. Unlike Civilization V Endless Legend does not require population assigned to these tiles.

This large city has 26 inhabitants. The city itself gathers 91 food, 82 industry, 175 science 62 dust and 55 influence  from the area surrounding its 15 districts. The 28 workers are all assigned to production. Therefore the bonus will be calculated as 28 * 10 (production per worker) = 280. Combined with  other bonuses from approval, difficulty level and buildings the total production is 588 per turn. 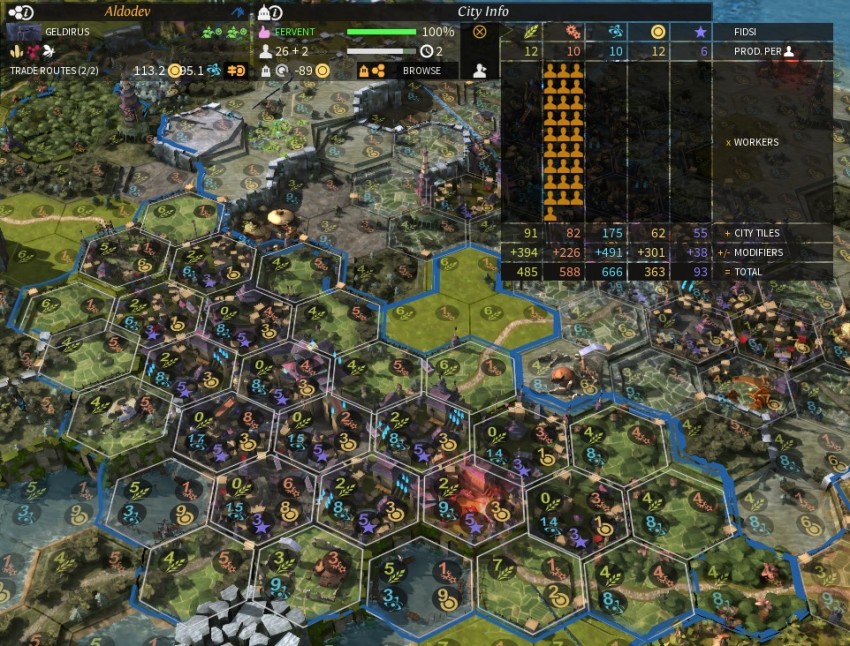 The same city but now 20 workers are assigned to dust.  Therefore the dust income is increased by 20 *12 = 240. Total gold earnings have increased to 904. But obviously production has dropped down to 269 per turn. 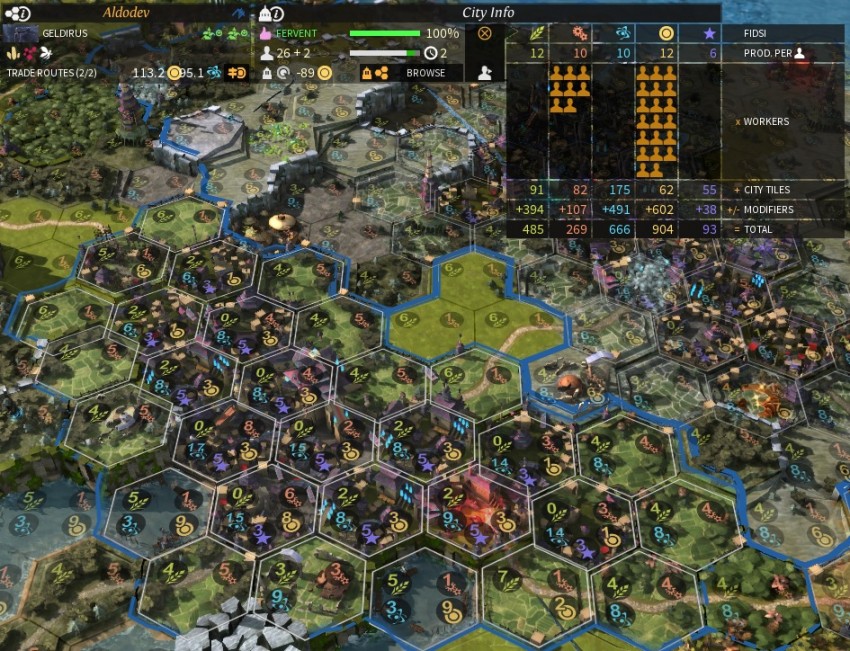 What do strategic resources do?

Strategic resources are used to construct powerful weaponry and armory for your military units.

How do I gain strategic resources?

They are obtained by creating so called “extractors” on resource nodes. Alternatively you can also build a city (district) on top of resource nodes. The city will act as extractor. Strategic resource totals will be listed in the top left corner.

How many strategic resources are there?

What is the difference between these strategic resources?

Higher tier resources will allow you to construct superior gear. Within the same tier the stats are roughly comparable. However each have their preferences. For example Glasssteel based weapons tend to have more initiative. The titanium counterparts offer a higher attack rating. Keep in mind that higher tier extractors are more expensive to build.

Luxury resources are extremely important in Endless Legend but are easy to miss. They can provide huge benefits to your empire. Especially on approval (happiness).

To activate a booster simple click on a luxury resource with a yellow square around it. Boosters will be active for 10 turns.

Endless Legends uses a refreshing way for dealing with technological advancement. The system was setup for maximum freedom and forcing the player to actually choose. Let’s find out how they did this.

Freedom from Era’s and Quadrants

All techs are scattered across six era’s. Every time you unlock an era some changes to your game are made.

Within each era there techs are split into quadrants

However this distinction merely exists for your convenience. All techs can be researched regardless of order. There are no paths! So once an Era is unlocked you have complete freedom.

For every 9 techs completed you will unlock the next era. Because the first Era contains 21 (!) technologies it is possible to unlock Era 3 without researching any Era 2 technology. How you progress to the next Era is completely up to you.

Nominal cost: You have to make a choice

Like pretty much all 4K games research gets more expensive the further you get in the tech tree. However Endless legends adds an additional factor; nominal cost.

Nominal cost: For each tech completed the cost of ALL other technologies increases

How does this work? Well let’s say you have skipped most Era 1 technologies. In Era 3 you notice you really need the Mercenary market unlocked, which happens to be an Era 1 technology. At the time you were still in Era 1 that research would have cost you 181 science points (5 turns). Now it will set you back 570 science points (7 turns).

Another example… If you research all technologies you really “need” and then decide to go for a Science Victory (= research six very expensive techs from Era VI) you will have to spend 240.000+ science points for each tech. If you take only the techs needed to reach the last ear you can research them for 120.000+ points each.

Combining the Era’s with the nominal cost a us a very important rule can be distilled; only research something if you need it! This is the exact opposite from competitors such as Civilization V where you are forced to research that Longswordman, even if you have no acces to iron.

Approval is one of the major mechanics of Endless Legend. At high approval levels your cities will gain bonus food and production. At any approval level below “content” you will start to lose production and growth.

Approval is lowered by two factors:

How to manage approval in Endless Legend

Basically approval forces you to chose between a lot of small cities and a few very large cities. Both strategies are viable in Endless Legend. Luckily you can overcome this barrier with technology and careful planning

There are a lot of buildings that locally increase your approval levels. The first building is called “The Sewers” and provides you with a +30 bonus.

Every time you surround a district (or city) by 4 other districts it will upgrade to level 2. This process provides it with a +15 approval bonus

Example (found this on the official Endless Legend forums):

The most left example is a city with 5 districts meaning it will have a population of at least 10. The center tiles (blue) will be  level 2. Meaning the city itself will provide +15 x2 and -10 * 4 = -10 total. If you would construct your city in a narrow line your approval would be -60.

So if you plan ahead you actually start to generate additional approval from your city. Meaning you can found additional cities more easily.

Approval from using districts as extactors

Every time you are close to a luxury or strategic resource you should consider to expand your city to that tile. Besides acting as a “free” extractor it will also provide your city with +15 approval instead of -10.

In tier 2 ,4 and 6 technologies can be found that lower expansion disapproval by 25% each. If you have multiple cities then these technologies are an awesome approval boost.

Luxury boosters such as grapes provide a +30 approval bonus on ALL your cities. Since you can activate multiple boosters at the same time all your cities will be fervent (max approval) in no time!

This guide can, and probably will, be extended. Want to know something? Just ask in the comments.